My comment/question was the Indian Navy usually asks its political masters (especially Prime Minister Narendra Modi ) whether the Navy can radically alter its shipbuilding strategy/plan. I didn’t believe the Navy could get away with so boldly telling Parliament what the Navy was going to do. This is because Parliament supplies the ship/sub building money and politicians have a “pork barrel” tendency to build subs/ships in their own state/electorate for political gain.

On March 27, 2021 Gessler replied, with excellent detail and links, along the lines: 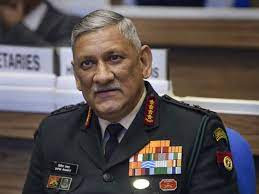 The Indian government created the post of Chief of Defence Staff (CDS) on 24 December 2019. Since then the first (only) CDS, four star General Bipin Rawat (photo above - a former Chief of Army Staff) has been pushing the Navy to prioritize its purchases. Only a few months after taking office, CDS Rawat has pushed for submarines as opposed to aircraft carriers. As an illustration see this article of February 17, 2020 Approval for third aircraft carrier may not comesoon, indicates CDS Rawat.

The Arihant class and INS Chakra are current. Third one down is a possible shape and comparative size of a future Indian attack submarine (SSN) below that is the possible shape of a future, larger Indian SSBN class (known as S5). (Artwork and captions courtesy
H I Sutton's, Forbes article of Feb 23, 2020).
---

The CDS has been supporting the build of 6 SSNs in particular. See this article, which says in summary: At CDS Rawat’s first media interaction, of Feb 2020, he asked the Navy to re-evaluate priorities and hinted that if it pushed for the third aircraft carrier it would have to forgo the 6 SSNs.

CDS Rawat's call to prioritize 6 SSNs met resistance from the Chief of Naval Staff on down - see Feb 21, 2020’s Indian Navy will push ahead with plan for 3rd aircraft carrier despite CDS’ reservations.

This internal defence force conversation went on for little over a year, from Feb 2020 to Mar 2021. In the civilian public domain, the discussion of SSNs vs 3rd Carrier continued. Several retired Admirals and other senior Navy officers published opinion pieces. Some even accusing CDS Rawat of “Land-Centrism”. Although in reality there's nothing land-centric about a fleet of SSNs. While some rejected the accusation, some even supported a Land-centrism case.

Meanwhile, the internal conversation finally culminated in the Combined Commanders Conference in early March 2021...where the Navy finally made the decision to abide by the CDS' call for SSN prioritization.

CDS Rawat has had solid political support. He served as Chief of Staff of the Indian Army from 2016-2019. He was then promoted to be India's first CDS, a position who's creation was recommended by several Defense Committees for almost two decades. CDS Rawat, though still of 4-star rank, became 'First Among Equals', over the three Service Chiefs (Army, Navy and Air Force). His promotion to CDS naturally occurred with the support of Modi and that of National Security Advisor (NSA) Ajit Doval. The NSA was reorganized into a very powerful Cabinet-level position in 2019.

All this means is that the Navy informing Parliament (in March 2021) that the Navy would be prioritizing the SSN program over the 3rd Carrier, was no surprise to Modi. The Navy was simply reminding the Indian government that this so-called “internal defence force decision” was what CDS Rawat had publically advocated in Feb 2020 and SSN prioritization already had the full support of the Modi government.

In summary, the national security strategy/plan devised by the Modi government, NSA and CDS, that prioritizes SSNs over another carrier, has now overcome the Navy’s internal resistance to the strategy.

Hi Pete, thanks for the Article! Nicely summarized.

On that note, and keeping all the Defense reforms pushed by the Modi Govt. in its 2nd term (2019-2024) in mind, the most significant is easily the Theaterization of the Armed Forces in general, and in particular the creation of the Maritime Theatre Command (MTC). And I think the push for prioritization also needs to be seen in that light.

Although the Theaterization of the Air-Land tactical command-and-control chain on India's Western & Northern/North-Eastern Borders that places all tactical assets in the theatre (infantry, tanks, missiles, aircraft) under one Theater Commander regardless of which Service recruited or trained that asset, very much in league with the US Unified Combatant Command concept (and the creation of unified Air Defense Command which is likely to be à la NORAD) are likely to be the ones that receive the most attention from the Indian Press, from an Indo-Pacific perspective I'd say the MTC is the most significant in terms of capabilities represented.

A good read regarding that: https://thediplomat.com/2020/12/indias-new-maritime-theater-command-a-quantum-leap/

The MTC would be unifying the Indian Navy's Western & Eastern Naval Commands as well as the already Tri-service Andaman & Nicobar Command under one operational Theater Commander who would use all the assets as he sees fit and would treat the entire Indian Ocean Region as one combat theater with the Peninsular portion of India at its center.

To get a good look at what all the MTC would entail, a somewhat zoomed-out perspective is necessary...basically you're looking at ALL the ships & submarines of the Navy to include major surface combatants, carrier task forces, diesel & nuclear-powered attack subs, all support, auxiliary & special vessels, all tactical anti-ship missile forces based out of both Peninsular India as well as the A&N Islands, all Naval Aircraft (fighters, maritime patrols, drones) all Air Force aircraft that till now were shore-based but poised for a maritime strike role with cruise missiles, all Army amphibious infantry personnel which till now were controlled by Army but made to land on beaches in Navy ships, all Naval Special Operations Forces (SOFs), all ground-based VLF/ULF transmitters, any future dedicated Marine Infantry force, control of all Indian military-owned bases in peninsular India & IOR...all this and more, under one operational commander - a Three-star Naval Officer.

And of course, though the Nukes on the SSBNs would be operationally still under Strategic Forces Command the boats will however be manned & maintained by Navy personnel therefore the responsibility to deliver the survivable nuclear deterrent, and to provide the means of protecting them from enemy action, will be on MTC.

This is more operational capability (and responsibility) than what any other Theater Commander under the currently-planned setup would have, heck even the Coast Guard may have to report to him. MTC commander would be the most powerful person reporting to CDS/Joint Chiefs of Staff Committee and that will inevitably have an impact on the way budgets & priorities are doled out in the future. And when dealing with the needs of such a huge command, prioritization of purchases is likely to take on a whole new level of importance - no wonder CDS was pushing for it. (Contd...)

Furthermore it would cut the Chief of Naval Staff (CNS)'s office out of the loop of operational control of any assets whatsoever, and merely be confined to an administrative role with the responsibility to recruit, train & base naval personnel, and fill papers to buy equipment on their behalf.

With the open ocean in front of him with no immediate adversary (unlike the Air-Land Theater Commanders who's job it will be to manage the Chinese & Pakistani borders), it will leave the MT commander with a lot of room to maneuver & grow.

There are some other views from experts as well, namely that this is too much responsibility for one person and that India may need not one but two MTCs:

MTC is the space to watch - how well the Indian Navy's programs evolve in the future (or don't) will be determined by how the MTC turns out.

"A report that German submarines are navigating the globe with Russian hardware has sparked security concerns. The newspaper Bild claims that the equipment is "open" to cyber sabotage and even "full loss of operability."

A navigation system of Russian origin called Navi-Sailor 4100 has been installed on at least 100 vessels operated by Germany's military, the Bundestag, including submarines, since 2005, according to the mass-market newspaper Bild am Sonntag."

Looks like the German Navy unrealistically assumes because this Russian navigation aid equipment passed through the hands of Finnish firm (Wartsila) that German submarines are somehow immune from being tracked (or malwared) by the Russians.

Although it must be said if the Russians do know where German submarines are (when German subs are monitoring Russian vessels and/or Russian coastal communities) in the Baltic, North seas, Atlantic and Arctic oceans -

it will be safer in peacetime because Russian warships are less likely to collide with or depth charge German subs.

Unfortunate for the German submarine service in a war against Russia though Russian vessels will be in a better position to know where to destroy German subs (by collision, depth charge of ASW torpedo).