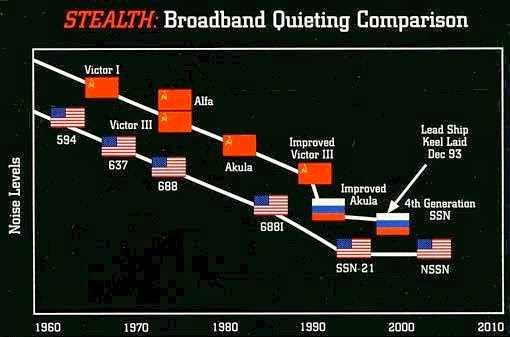 [1]. Regarding "Ocean background noise" or ambient noise - see Figure 1.       at http://www.nature.com/articles/srep00437 for noise levels (at sea) from natural/biological and Shipping Noise - yielding at least 90 decibels in 2001 and 2007. The 90 decibels appears more an average than a constant noise level everywhere. So submarines that can be very quiet in quiet ambient sea conditions can use their Passive Sonars to hear much more enemy activity over longer distances.
[2]. China’s Type 094 Jin SSBN is the loudest, too loud to go on regular patrol. In 2009, USN ONI listed the Type 094 as being slightly noisier than Project 667BDR (NATO reporting name Delta III) from the late-1970s, some of which were in service through 2015 with the Russian navy.] 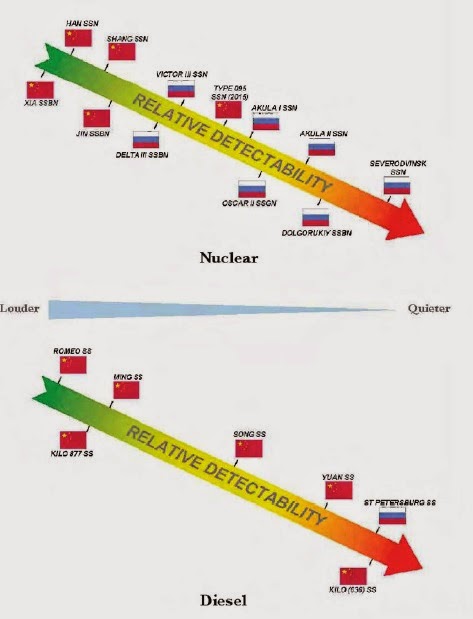 The charts give a good impression of relatively capability (assuming they're accurate; there's no way to know in open source) but I think it should be pointed out the crew training and maintenance also have a large contribution to a boats sound signature, especially transients but also plant and propulsor noise. The state of the crew and the boat made cause it to have a much noisier signature that would typically be the case for given ship of its class.

Its generally accepted in open source that US sound libraries can map individual submarines by defects in their maintenance or manufacturing that lead to specific tonals in their machinery...though the flip side also is sometimes this ID is obscured after maintenance or replacement of the part(s) that produced the characteristic noise.

The discipline of the crew themselves are also a source of self generated noise - some actions must be absolutely restricted when running silent. Things like food prep, maintenance, freshwater production, offloading waste, etc. can't take place while silent running, and even simple clumsy actions like dropping large items might lead to a momentarily detectable noise.

¿any source for that?.

Miasnikov estimates (probably at worst) 90 Db@1KHz / 110 Db@2-200Hz for Akula I, so I suspect that the numbers of the post are not very precise for new ships.

90 DB for the sea background? on what conditions?

Any data to support the facts?.

Your research can begin with https://www.armscontrol.ru/subs/snf/snf03221.htm

Those "sound libraries" might even discern which captain is commanding a certain sub. This may be via the pattern of the number of times he alters the speed of the sub over 24 hours and how many times he turns the sub in order to check/clear the "baffles".

A more definite reply to "90 DB for the sea background? on what conditions?"

See Figure 1. of http://www.nature.com/articles/srep00437 for Ambient noise levels (at sea) from natural/biological and Shipping Noise - yielding at least 90 dB from 2001 and 2007.

Looks like more of an average than a constant noise level everywhere. So submarines that can be very quiet in quiet ambient sea conditions can use their Passive Sonars to hear much more enemy activity over longer distances.

LIBs should be installed to satisfy requirements for inclination and vibration and should be operated within specified temperature range (10C-45C). At lower temperature operation under 10C, adequate measure such as control of environment should be taken into account at design stage to prevent from thermal runaway caused by deposition of metallic lithium.

Ventilation system, fire detector and fixed fire extinguisher should be equipped. Carbon dioxide or nitrogen gas should as extinguishing agent and use of water and/or sea water is prohibited.

I think carbon dioxide is used instead of nitrogen, because carbon dioxide is heavier than air and nitrogen is lighter than it. The effects of inclination in the direction of aft/fore and port/starboard, vibration and temperature on the electrochemical properties of LIBs such as current-voltage, capacity-voltage, charge-discharge relation and aging should be understood. As the above mentioned satety system of LIBs is quite different from that of LABs, pilot operation of LIBs by 27SS or 28SS is very important. Simultaneously, various laboratory tests will be conducted.

Its Matt, thank your for the reference! These were the most credible open source acoustic signature figures I could find. However, I was not able to find as much literature on detection range which I'm aware is quite variable depending upon the environment and passive vs. active sonar.

Actual ranges would likely be very old or very classified.

Loring Chien at https://www.quora.com/How-far-is-the-distance-of-sonar-detection says:
"In some texts they show detection open ocean distances as much as 1000 km for [detecting old subs] older sub technology hundreds and down to 5 km for late model subs. For closed waters (shallow, artic) the numbers are more like <100 km down to about 5 km. depending upon sub technology."

Basically its a big Depends issue. Depends on noise target is making, on a vast number of sea-environmental conditions, whether the sub is assisted by seafloor senses, how good/powerful the sub's passive sonar is.

I would guess that Seawolf or Virginia SSNs (in blue water) and Collins SSKs (in brown water littorals) would have the longest range detection ability.

Japan has established standrds on secondary lithium cells and batteries for ships-electric energy storage equipment. I introduce a part (safety related) of normative refereces [1] which are indispesnsable for the application of the said standard.

In application of this normative referece for submarine, submarine-specific requirements should be taken into account, and only few maufacturers can conducts such risk assessment and reduction through whole submarine life.

[1] JIS (Japan Industrial Standard) C 8715-2 Secondary lithium cells and batteries for use in industrial applications-Part 2:Tests and requirements of safety Appendix E Establishment of target of safety level and risk reduction:
[2] https://en.wikipedia.org/wiki/Safety_integrity_level
Safety integrity level (SIL) is defined as a relative level of risk-reduction provided by a safety function, or to specify a target level of risk reduction. In simple terms, SIL is a measurement of performance required for a safety instrumented function (SIF).

probably, these are the only publics estimates, based in some kind of reallistic (¿?) data (specially in older models), and in a well defined environment. All data I've found for other sources copy them

At best, you have credible numbers.

The diagram shows the Alfa only barely louder than 637 class boats but for a few reasons, this seems bogus. First, officers and sonar techs on the 637 class boat I served on told me that the Alfas were incredibly loud. Secondly, we know that Soviet subs did not get quiet until they began to use the Toshiba milling equipment that they acquired in the early 80s. Lastly, the Alfa was meant to be fast, to chase down aircraft carriers and shoot them. The Alfa was not intended to be quiet. They were faster than our torpedoes and could operate at depths greater than our torpedoes were rated for.

So by 637 you mean the US Sturgeon class SSN https://en.wikipedia.org/wiki/Sturgeon-class_submarine with 37 operating in commission 1967–2004. Preceding the Los Angeles.

Yes the Soviets had an odd assumption that the speed and deep dives of the Alfas https://en.wikipedia.org/wiki/Alfa-class_submarine (7 in commission 1971–1996) were more important than quietness. They might outrun and outdive torpedoes. But passive sonar (including SOSUS) detection, then rocket fired or airdropped NUCLEAR armed depth charges/bombs https://en.wikipedia.org/wiki/Nuclear_depth_bomb (more commen in 1970s-90s) would have finished most/all off.

all great info, i'd take a pepsi challenge iwth an 88i and the better towed array and feel just fine and safe. Virginias and seawolfs are almost unfair...

I don't know what you are trying to say. Please explain.

sorry about that, i meant, a 688i, with the best towed array available and a well trained crew, I'd feel perfectly comfortable going against any threat in the world. Using a 774 or 21 class would be almost cheating :) Just my 2 cents from working 23 years in the sub community, active and civilian cheers

For clarifying - based on your long career with subs.

And Virginias (774s) and Seawolfs (21s) https://en.wikipedia.org/wiki/Seawolf-class_submarine#Design with towed could detect the latest Chinese and Russian subs more easily.

yeah, i would have no fear going against the best in the world with a 688i, caution and MUCH preparation! But no fear of my ability to find and track them safely

A left field question you guys might be able to help answer. Im a keen diver and wondered for years if a submarine could glide past a diver unnoticed (forgetting water disturbance). Any thoughts?

I know more about submarines than skin diving and whales.

But I can say/guess that a 2,000 ton submerged submarine is 10 times larger/heavier than a large, 200 ton, Blue Whale https://en.wikipedia.org/wiki/Blue_whale The Blue Whale being the largest whale, and animal, that ever lived.

I would guess, the turbulence created by a 2,000 ton submarine, moving at 2 knots, is likely to be felt.

There is a danger a diver might get sucked into the sub's propeller or its pumpjet.

A submerged submarine is not totally silent, so there is likely to be some gearbox and electic motor noise.

A surfaced or snokeling sub may be running diesels equivalent to 2 to 4 battle tank engines so a sub in that condition could be quite noisy.