With the Covert Shores - Popular Mechanics articles yesterday what can we learn about Japan's Future Submarine class, classified 29SS?:

29SS (see Table below) with a little more color, will be the lead boat in the new Japanese Kamikaze
(神風 - "Divine Wind") class. The Kamikaze were 2 "divine winds" or storms said to have saved Japan in the 13th century from 2 Mongol/Chinese fleets. This clearly has renewed relevance to the Chinese naval threat to Japan today. Such mythical winds follow Japan's Oyashio
(mythical currents ) and Soryu (mythical dragon) class submarines.

Japan relied on (overly) brave Japanese pilots in Kamikaze aircraft to sink or damage allied ships in WWII, in part because of inadequate use of Japan's submarine force (see page 2, paragraph 1 of this source). It is therefore fitting that Japan's new submarines, faced with overwhelming Chinese submarine numbers and Chinese SSN qualitative superiority, will carry on such sacrifice.

"The designation “29SS” is derived from the 29th year of the reign of Emperor Akihito, otherwise known to everyone else as 2017, and SS is the international shorthand for non-nuclear attack submarine

... 29SS retains the general hull form of earlier submarines but with some important changes. The sail is substantially reduced and blended into the hull, which should reduce hydrodynamic drag. This will make the submarine quieter, perhaps a little faster, but also more energy efficient. Non-nuclear powered submarines, operating underwater under combat conditions, must carefully manage their power or risk being forced to surface. The dive planes have also been moved from what’s left of the sail to the hull.

...The research and development phase will take place from 2025 to 2028, and the first ship of this class will probably hit the water around 2031."

Of course the Kamikazes (like the Australian Under Attack class) will be as good as sunk against the superiority of Chinese and Russian nuclear propelled attack submarines (SSNs).

Japan and Australia currently, and out to 2040, will be totally reliant on the whims of increasingly isolationist US SSN management to take on Chinese and Russian SSNs.

China's and Russia's increasingly sensitive fixed and mobile anti-submarine sensors demand more discrete performance from these Japanese and Australian diesel-electric submarines. But even with LIBs, these Japo-Aussie subs still need to loudly snort with supercharged diesel engines every 10 days. Thus blowing their residual discretion out of the water.

What might the new Kamikaze - 29SS class look like (courtesy H I Sutton's Covert Shores and anticipated by Submarine Matters on June 14, 2017 ):

With a pumpjet/propulsor and (Alfa, Akula slightly Type 212A) smaller, faired fin/sail on a Soryu looking hull (above). Inspired by artwork released by "Kobe Shipyard" (KHI, MHI, Japanese MoD)  via Covert Shores (below): 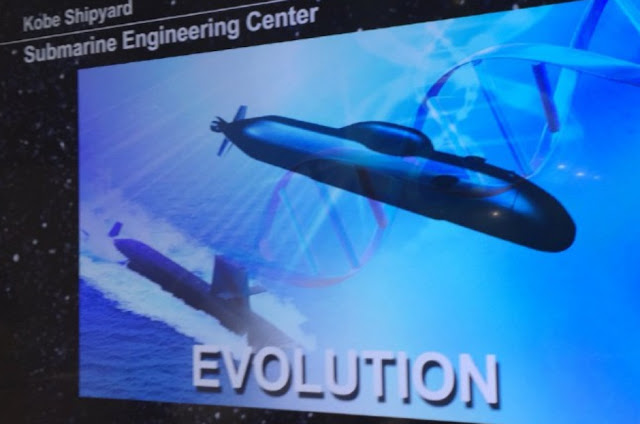