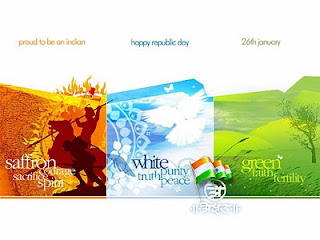 Happy India Republic Day :)  Above is a vertical interpretation of India's horizontal tricolour national flag. Deep saffron represents courage, spirit and sacrifice; white for truth, peace and purity; and, green for prosperity, faith and fertility. The Ashok Chakra in the flag represents the Laws of Dharma (righteousness).

Many people throughout India and overseas celebrate India's Republic Day on January 26 each year. India became independent of the UK on August 15, 1947. India did not have a permanent constitution at that time. India's Constitution came into effect on Republic Day, January 26, 1950. This date was chosen as it was the anniversary of Purna Swaraj "complete self-rule" Day, which was held on January 26, 1930.

On every January 26, large military parades are held in New Delhi and the state capitals with representatives of the Indian Army, Navy and Air Force and traditional dance troupes taking part.

The grand parade in New Delhi starts with India's Prime Minister laying a wreath at the Amar Jawan Jyoti "the flame of the immortal soldier" at India Gate, to remember soldiers who sacrificed their lives for their country. India's President takes the military salute during the parade in New Delhi while state governors take the military salutes in state capitals. A foreign head of state is the President's chief guest on Republic Day. 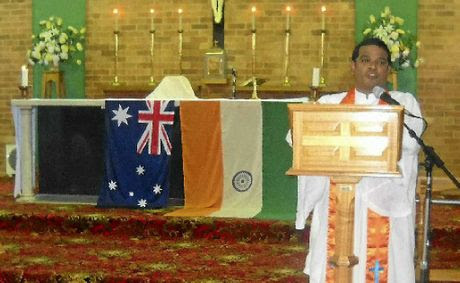 Linc Energy holds rights over more than 65,000 square kilometres of land in the area and started explorations in 2008.

In a statement to the Stock Exchange, the company said reports from US-based consultants indicate underlying rock formations "are rich in oil and gas prone kerogen."

The company says up to 233 million barrels of oil are estimated to be trapped in the shale."

"...If the reserves and the pressure was right over millions of years and the rocks have done the things they think they've done they think they can extract vast reserves of oil out of South Australia which would have a value of about $20 trillion."
-
Pete
No comments: Posted by Pete

Celine Dion & Andrea Corr "My Heart Will Go On"


-
Quite something.
No comments: Posted by Pete

Was there India-Australia contact 4,000 years before this meeting?
-
Australian scholarly website The Conversation, January 15, published the following article
http://theconversation.edu.au/study-links-ancient-indian-visitors-to-australias-first-dingoes-11593 which states in part:

A new study of DNA has found that Indian people may have come to Australia around 4000 years ago, an event possibly linked to the first appearance of the dingo [dog].

... "“We also detect a signal indicative of substantial gene flow between the Indian [human] populations and Australia well before European contact, contrary to the prevailing view that there was no contact between Australia and the rest of the world

...This is also approximately when changes in tool technology, food processing, and the dingo appear in the Australian archaeological record, suggesting that these may be related to the migration from India.”"

...Although dingo mtDNA appears to have a Southeast Asian origin, morphologically, the dingo most closely resembles Indian dogs,” the researchers said.

it was not clear how many people came from India to Australia.

“It does not necessarily indicate direct contact with mainland India. For example it could be via populations elsewhere whose original source was mainland India,” said Professor Cooper, who was not involved in the research.

People were capable of sea travel and exploration for many hundreds of thousands of years and thus should have come to Australia many times during the last 50,000 years or so.”"
WHOLE ARTICLE
-
Pete
2 comments: Posted by Pete 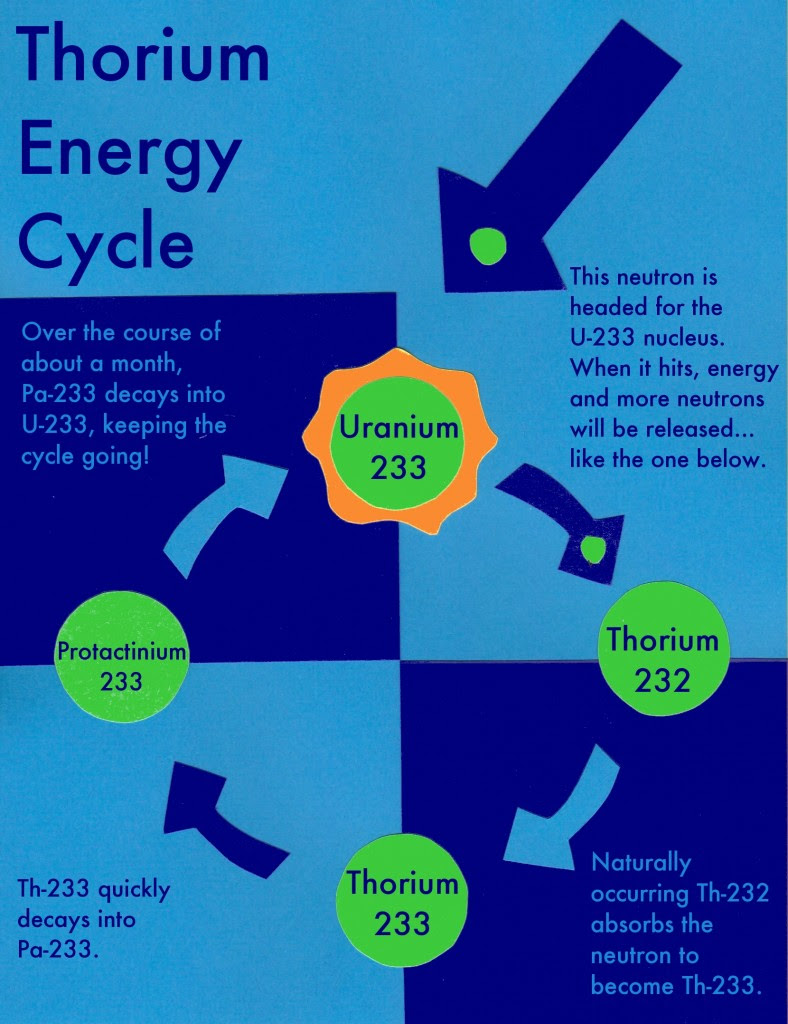 Thorium Reactor energy cycle (click to expand).
-
A very interesting article on Thorium Reactors by John Ridd was published on Australia's On Line Opinion , January15, 2013 - see http://www.onlineopinion.com.au/view.asp?article=14571 . Article states in part:
-
"Two books that influenced me over the last year are Thorium, energy cheaper than coal by Robert Hargraves...Hargraves is an expert on energy policy. His detailed knowledge is encyclopaedic and almost daunting;...
...Hargraves also worries about air pollution per se and rising population. He talks of 'an unsustainable world'. His basic thesis is that most countries cannot afford to stop using coal power stations and that they will not stop – unless a cheaper alternative is available; hence the title of the book.
...The Uranium isotope 235 is said to be 'fissile'. When a U235 nucleus is hit by a neutron it splits roughly in half, gives out enormous energy, and spits out a lot more neutrons which in turn hit other U235 nuclei and so on. Controlled, that 'chain reaction' provides useful heat; uncontrolled it gives a big bang. Thorium is not fissile, it is said to be 'fertile'. When a neutron hits a Thorium 232 nucleus it makes its eyes water but it only spits out one particle and then later another which transmutes it into a Uranium 233 atom – which is fissile and a form of chain reaction then starts producing energy. So it is breeding its own fuel. A small amount of Uranium is needed to kick start the process.
Hargraves argues strongly that the best bet for producing energy cheaper than coal is the Liquid Fluoride Thorium Reactor LFTR. There is nothing new in the idea; much research and construction of reactors went on in the 1950s and 1960s. A good example was the Oak Ridge Lab (USA) molten salt reactor experiment which operated successfully for 4 years up to 1969. Work on LFTRs and similar has taken place in many countries. 'Since 1996 India has operated its experimental Kamini 30kw reactor… and… India's national strategy is to produce 30% of its electricity from thorium by 2050'.
Hargraves claims that LFTR reactors have many advantages over 'normal' Pressurised Water Reactors PWRs. Examples are:
· It promises to be able to produce electricity cheaper than coal
· LFTR reactor 'cleans' itself of products that damage a PWR; for example Xenon, which affects efficiency, simply bubbles out.
· A PWR operates at 160 atmospheres, whereas a LFTR works at normal atmospheric pressure so LFTR is safer.
· LFTR operates at much higher temperatures, a fact that increases efficiency of electricity production.
· LFTR produces less than 1% of the radiotoxic wastes compared to PWR.
· LFTR does not produce material suitable for bomb manufacture, it is hence proliferation resistant. (Hargraves places a high priority on non-proliferation.)
· Thorium is effectively an inexhaustible resource.
In keeping with his aim of 'energy cheaper than coal', Hargraves discusses in some depth a number of reactors that are under consideration across the world. Two that interested me are:
(a) Denatured Molten Salt Reactor DMSR also uses Thorium; it could be a cheap source and is 'likely to be the first molten salt reactor to reach the market', but it requires more U235 to keep it running than LFTR.
(b) The Toshiba Westinghouse AP 1000 which is a PWR reactor but is far superior to older reactors due to over 50 years of experience and development.
China is moving rapidly down the nuclear road. It has 14 plants in operation and 25 under construction, with a capacity of 60GW rising to 200 GW by 2030. In comparison the Three Gorges hydropower project which displaced well over a million people generates 18GW. China is using best ideas from everywhere – AREVA (Europe), Toshiba/Westinghouse, Pebble Bed reactors based on German work and fast breeder reactors from Russia. Notably [China] has set up and funded a project to develop Thorium LFTR reactors. Hargraves claims that then Premier Wen Jiabao says that China will accelerate …nuclear energy and 'put an end to blind expansion in industries such as solar energy and wind power'."
-
see whole OLO article at http://www.onlineopinion.com.au/view.asp?article=14571
-


PETE's COMMENT
-
Use of Thorium reactors might be a bonus for Australian miners as Australia is estimated to have the largest Thorium "resources" in the world http://www.ga.gov.au/minerals/mineral-resources/thorium.html .

However John Ridd might be overly optimistic about Thorium reactor's technical and economic viability given the very low use and slow development of Thorium reactors over the last 60 years.

All in all if Australia is ideologically opposed even to Thorium reactors we can at least export it to future customers like India, France and China etc.

On some Indian attitudes to Thorium reactors see http://defenceforumindia.com/forum/science-technology/23318-liquid-fluoride-thorium-reactor.html

Aspartame and Equal are Safe According to Authorities

Although Equal-Aspartame is the subject of conspiracy theories, see http://en.wikipedia.org/wiki/Aspartame_controversy#Internet_hoax_conspiracy_theory

- the US Food and Drug Administration (FDA),
- the U.S. Government Accountability Office,
- UK Food Standards Agency,
- the European Food Safety Authority (EFSA), and
- Health Canada.
Large scale, peer reviewed, scientific tests have found extremely small risks. Note that nuts can kill some people. Have we all cut nuts out of our diet?
see FDA's actual website at http://web.archive.org/web/20070102024642/http://www.fda.gov/fdac/features/1999/699_sugar.html which indicates in part:


"Aspartame has come under fire in recent years from individuals who have used the Internet in an attempt to link the sweetener to brain tumors and other serious disorders. But FDA stands behind its original approval of aspartame, and subsequent evaluations have shown that the product is safe...While questions about saccharin may persist, the safety of another artificial sweetener, aspartame, is clear cut, say FDA officials. FDA calls aspartame, sold under trade names such as NutraSweet and Equal, one of the most thoroughly tested and studied food additives the agency has ever approved. The agency says the more than 100 toxicological and clinical studies it has reviewed confirm that aspartame is safe for the general population.:


... It is true, says Hattan, that aspartame ingestion results in the production of methanol, formaldehyde and formate--substances that could be considered toxic at high doses. But the levels formed are modest, and substances such as methanol are found in higher amounts in common food products such as citrus juices and tomatoes."


Read this FDA statement in full for context. People are afraid of rare risks like terrorism or rare diseases - not crossing the road or driving at night which are vastly more dangerous.

DO YOU AGREE ASPARTAME-EQUAL IS SAFE?