Another Fire on French SSN Perle

“…onboard as [Perle's repairs] in the Mediterranean port of Toulon neared completion, officials said [September 27, 2022].

Around 90 firefighters were called to extinguish smoldering on board “La Perle” which is thought to have broken out in insulation “in a storage area used for food,” a spokesman for the local maritime authority, Pierre-Louis Josselin, told AFP.

The incident was described as “combustion without flames” and all hotspots were extinguished by firefighters on [September 26, 2022] evening...."

Perle had been slated to return to service in the first quarter of 2023. We’ll see if the fire has delayed the return.

Perle is one of five Rubis-class SSNs remaining.

Meanwhile Suffren of the larger replacement Barracuda-class was commissioned in November 2020 and the second Barracuda Duguay-Trouin is slated to be launched later in 2022.

My impression is that fires on submarines seem to occur most often during refits (like this 2022 fire), repairs, maintenance or upgrades - with welding or cutting tools setting insulation alight.

Here and above is a video, published in early 2022, on Japan's Type 12 cruise missile, with details on future developments. (Video courtesy Dung Tran Military).
---

"I have drawn a genealogy of Japanese Anti-Ship Cruise Missiles (ASCMs). [1]

I will use this as a reference to write about the "Type 12 Ground-to-Ship Missile" (Type 12) [aka more commonly in English called a Surface to Surface Missile (SSM)] and its derivatives.

The "Type 12" was literally adopted in 2012, and several improvement projects exist.

One of them is the "Type 17 Ship-to-Ship Missile" (Type 17 [Projected started in FY2017]), a shipborne version with an extended range.

However, the latter "Type 12 Ground-to-Ship Missile Kai" (Type 12 Kai) was cancelled due to requirement for longer range and better survivability.

In order to fulfill this requirement, development of the "Type 12 Ground-to-Ship Missile : Improved" (Type 12 Imp.) and its derivatives were initiated.

Their main features are as follows : "Long-Range", "Stealth", "Ground-attack-capable", and "Rapid-deployment".

The first three indicate that these ASCMs are capable of destroying enemy fleets [including aircraft carriers] as well as [in land attack mode] air-bases (whether the ASCMs are on land or at sea).

And the last one strongly suggests that the Japanese government expects "the next war" to be imminent."

"By the way, so how imminent is "the next war"?

The timing of the start of deliveries of the "Type 12 Imp." suggests it.

However, the Japanese government decided to accelerate the start of deliveries by 4 years to July 2025. [3]

Naturally, the derivative versions will be deployed similarly ahead of schedule.

There is reports that over 1,000 rounds, including the derivative type, will be purchased [4], but it will take at least several years to complete.

This suggests that the Japanese government expects "the next war" to occur in the 2030s."

[3] [Two page Japanese language document with title translated: “Items scheduled to be procured in FY2022 (central procurement)”. The rest is in Japanese]

https://www.yomiuri.co.jp/politics/20220820-OYT1T50270/ [originally in Japanese. Now  translated to]: “[Original] Possession of over 1,000 long-range cruise missiles considered”  “It turned out that the [Japanese] government is considering possessing more than 1,000 long-range cruise missiles that it has decided to introduce. With Taiwan contingencies in mind, the missiles will be deployed mainly from the Nansei Islands to Kyushu, with the aim of bridging the "missile gap" with China, which deploys a large number of ballistic missiles.

This was confirmed by several government officials. The government will extend the range of the domestically produced Type 12 surface-to-ship missile deployed by the Ground Self-Defense Force from its current range of over 100 kilometers to around 1,000 kilometers, which will reach the coastal areas of North Korea and China. Improvements are being made so that it can be launched from ships and fighter planes. The plan is to deploy the improved ground-launched version in fiscal 2024, about two years ahead of schedule. It will also be applied to ground attacks targeting the ground.

In the [Japanese] National Security Strategy to be revised at the end of the year, the government is expected to announce the possession of "counterattack capability" to attack the enemy's missile launching bases for self-defense. Improved missiles will be the core of the "counterattack capability." In order to have more than 1,000 missiles soon, it is necessary to increase the production lines of companies involved in missile development. The [Japanese] Ministry of Defense plans to create a system to support capital investment by related companies, and plans to include related expenses in the budget request for the fiscal 2023 budget.

The reason why the government is aiming to possess a large number of long-range missiles is because the gap between Japan, the United States and China in their missile attack capabilities is too wide.

Until now, Japan has not deployed long-range missiles capable of ground-attacking, as it had a policy of not possessing "enemy base attack capability" (counterattack capability). Since signing the Intermediate-Range Nuclear Forces (INF) Treaty with the former Soviet Union in 1987, the United States has prohibited the possession of ground-launched missiles with a range of 500 to 5,500 kilometers until it expires in August 2019. Currently, it has resumed development, but has not reached the point of ownership.

North Korea also has hundreds of ballistic missiles that can reach Japan. China and North Korea are also developing hypersonic weapons that fly on irregular trajectories and are difficult to intercept. It is difficult for the [Japanese] Self-Defense Forces to deal with it with interceptor missiles alone.”

China Recruits 162 US Nuclear & Other Scientists

China has ostensibly waged a long-running campaign to plant and recruit Chinese researchers from the USA’s leading national security research facilities, according to the latest reports.

…The report [by STRIDER "The Los Alamos Club" 32 pages at https://www.striderintel.com/wp-content/uploads/Strider-Los-Alamos-Report.pdf ] highlighted the government of the PRC’s attempts to nurture its young and talented scientists at US national laboratories and lure the brightest minds back to the country to boost its military projects.

The government of China has allegedly made a concerted effort to send Chinese scientists to Los Alamos National Laboratory, the site of the first nuclear weapons research.

Between 1987 and 2021, at least 162 scientists who had received scientific training at Los Alamos returned to Beijing to assist with various national research and development (R&D) projects.

There were 15 permanent staff members at Los Alamos, many of whom had extremely high levels of security clearance….”

Here's a rather thin report of not yet authorised, good US intentions. This might not be accepted by Australia, given the Labor Government considers submarines (AUKUS SSNs or not) must be built in Australia. This is THE money to Adelaide, South Australia, vote winning priority.

South Australia's Premier, on September 26, 2022, spoke out against any plans to buy submarines directly from the US.

The Australian Strategic Policy Institute (ASPI) has produced excellent information in its website The Strategist dated September 23, 2022, including:

-  “Despite progress, major challenges lie ahead for AUKUS”

-  “The Five Domains Update” This includes mention of US and UK nuclear submarine training of Australians under AUKUS, other issues and the following:

"The US Army is rolling out new combat goggles with an integrated visual augmentation system, or IVAS, to its soldiers in a 10-year investment estimated to cost US$21.8 billion ($32.9 billion). IVASs will provide hologram projections over soldiers’ fields of view and allow them to visualise critical data including maps and enemy and ally positions. They are also capable of picking up feeds from local devices, enabling them to ‘see’ through the inside of vehicles. The army’s move into the so-called metaverse with IVAS technology could be revolutionary for infantry battlefield operations."

"Super" combat goggles with many capabilities, including “see through” function, have been extremely high priced items for pilots of US built stealth fighters, including F-35 helmet-mounted display systems (HMDS).

If money is available commanders of US made tanks including Australian M1A2 Abrams might, one day, benefit.

Who knows, Australian Special Forces and then even regular infantry might receive such super goggles - if they can be built cheaply enough. 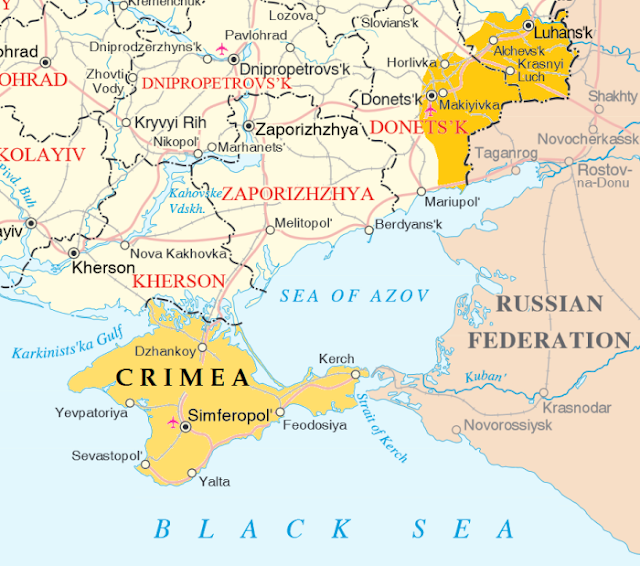 Some of Russia's Kilo submarines "almost certainly" moved east from Sevastopol, Crimea, to the eastern base of Russia's Black Sea Fleet at Novorossiysk, Krasnador Krai (district) of Russia. (Map courtesy the UN, via Reconsidering Russia...)
---

Moscow has likely moved its Kilo-class submarines from the Crimean peninsula [see "BSF" in this Table] to southern Russia over fears of them being struck by long-range Ukrainian fire, according to British intelligence.

In a daily briefing on [September 20, 2022], the United Kingdom’s defence ministry said those submarines had “almost certainly” been moved to Krasnodar Krai in mainland Russia, instead of a naval base at Sevastopol on the Crimean peninsula.

…Moscow considers Crimea as Russian territory, but the peninsula is internationally recognised as part of Ukraine, which wants it back.

…Kyiv forces swept through the Kharkiv region this month after bursting through the front line, sending thousands of Russian troops fleeing while abandoning their tanks and ammunition.

…Officially, Russia announced it was moving some troops out of the Kharkiv region to regroup elsewhere. But the losses are being openly acknowledged on state television by local commentators calling for escalation.

Putin has promised to continue, recently warning of a “more serious” military response to Ukraine’s “acts of terrorism”.

“It will not provoke a nuclear war, because we will use operative - not strategic - nuclear weapons on [Kalibr and Iskander missiles], and bombs on planes. [probably Su-30s or larger]”

If Russia escalates to a tactical nuclear stage it is possible Russia might do a small high altitude warning nuclear explosion over the Black Sea, with the implication Ukrainian armed forces (or even civilians) may be the next target.

It seems Putin would prefer to trash the region and kill additional tens of thousands rather than lose his personal control of Russia.