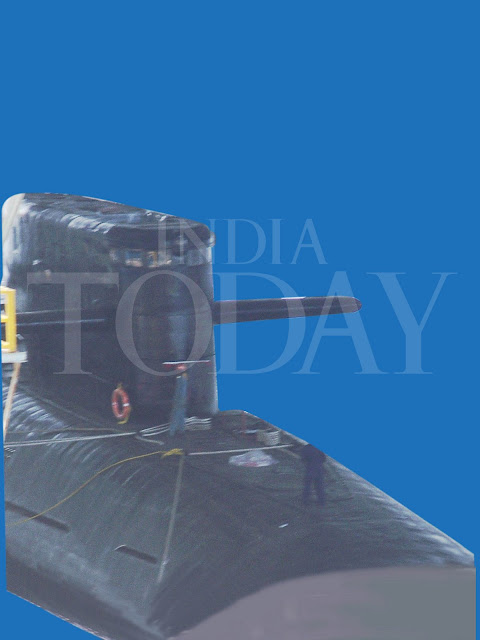 -
The most complete photo(?) image (above) of Arihant to date. Courtesy of India Today.
- 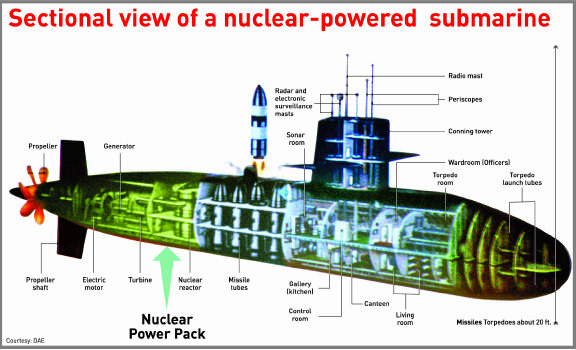 -
The slide (above) depicts insides of the Arihant. It is from an Indian Department of Atomic Energy (DAE) powerpoint presentation reproduced by Indian NDTV and other media outlets.

-
Though launched on July 26, 2009 the complete shape of Arihant still appears to be classified (based on the heavy restrictions on photos permitted).
-
There has been much speculation over the last two years about the size and design of India's Advanced Technology Vessel (ATV) nuclear sub program. Now the "launching" of the Arihant indicates that the weapons fit is as expected (K-15 then Agni III (K-4)). Early reports were of a Russian Charlie sized ATV 4 - 5,000+ tons. Puzzling and perhaps a pointer to the smaller vessel (for 3 vessels at least) was the 80 MW reactor reported all along. As it turns out India is planning to buld three Arihant Class then two larger SSBNs (carrying 12 Agni IIIs?) perhaps of the Akula II size?. So all in all I suspect our theories were mostly right ;)
-
India's first locally built nuclear submarine (Arihant is Sanskrit for "Slayer of Enemies") was launched on July 26, 2009 at the Naval Dockyard at Visakhapatnam on India's east coast. The hull is complete. The boat is floating. The reactor will be started soon - Indian sources report. The Indian Navy is being rather cautious with their new boat. One report claims the Navy didn't want a media launch but were overruled by the Prime Minister's Office since the PM was under attack for perceived concessions to Pakistan and needed to burnish his national security credentials.
-
The media were not allowed to take photos and they only saw Arihant after it was floated (thus hiding a good portion of the hull (sonar, prop ?) under water. Arihant is being built in a semi enclosed dock to keep it out of view of overhead satellites.
-
The submarine is 110 meter long with an eventual crew of 70-100 men. For its first 3 years of trials 10-20 technicians (mainly Indians but some Russians) are likely to be onboard.
-
Once designated the ATV, INS Arihant is the lead vessel of the class. The second and third submarines of the Arihant Class are due to be launched in 2010 and 2011. The three submarines of the class may be in commission with the Indian Navy by 2015-18.
-
Development
-
The ATV project started with the intent to design nuclear-powered fast attack submarines (SSNs). As nuclear armed nations placed greater reliance on the sea leg (SSBNs) of the nuclear triad and less on the more vulnerable air (bombers) and land legs (fixed silos and mobile launchers) India altered the course of the project towards producing SSBNs.
-
The Plutonium Recyling Project (PRP) at the Indira Gandhi Centre for Atomic Research (IGCAR) Kalpakkam was a cover name behind which BARC, a facility of the Department of Atomic Energy (DAE), built India’s first indigenous submarine Pressurised Water Reactor (PWR). This submarine reactor is in the so called "half boat" hull DAE built for testing prior to building the actual submarine (the Arihant) with an identical reactor. Both the land-test and reactor fitted in Arihant generate around 80 MW, powered by 40% enriched uranium. The relatively low HEU of 40% suggests regular refueling (every 10 years?) might be necessary. The Rare Materials Project (RMP) at Ratnahalli near Mysore, another DAE facility, produced the enriched uranium.
-
The initial version of the land-test reactor ran into technical obstacles and delay after which Russian help was sought to resolve the design glitches during the early 2000s. Significantly Indian Prime Minister Singh at the July 26, 2009, launch thanked “our Russian friends for their consistent and invaluable cooperation, which symbolises the close strategic partnership that we enjoy with Russia”.
-
The hulls for this class are built by L&T's Hazira shipbuilding facility in the state of Gujarat, northwestern India. . Tata Power built the control systems for the submarine. The systems for the steam turbine integrated with the PWR are supplied by Walchandnagar Industries.
-
Future Weapons Fit
-
The Arihant class may possibly be first armed with the BrahMos supersonic cruise missile but more likely it will have 4 tubes, each holding 3 x K-15 "Sagarika" SLBMs, see LAUNCHING PLATFORMS FOR PROJECT K-15 - so the Arihant may first field 12 K-15s. Then eventually one "K-X" SLBM per tube. The K-X is a version under development of the Agni-III IRBM. (hereinafter called the naval Agni III) - so four naval Agni IIIs per Arihant sub.
-
The K-15s will be fired from under water. After the cold launch phase a booster will kick with one or more stages raising it to a 20 km altitude followed by a parabolic path to a target up to 750km distant. The K-15 missiles, developed by the DRDO, are already under production. The DRDO has test-fired them several times from submerged pontoons off the coast of Visakhapatnam. They can carry both conventional and nuclear warheads. They are 10.4 metres tall and weigh 6.3 tonnes each. Their warheads weigh about a 1,000 kg.


The 750 km range K-15 is an interim weapon (vastly shorter range, less throw weight than the Chinese SLBM JL-2) on the way to the naval Agni III). It is the naval Agni III which may be equivalent to the JL-2 but an Arihant will only have 4 naval Agni IIIs.
-
This unique ability of a nuclear submarine to completely conceal itself underwater for up to 6 months will make it the most potent leg in in the nuclear triad. This is especially important given India's declared (though to date theoretical) no-first-use nuclear doctrine (which apparently does not apply to Pakistan). The nuclear submarine will provide a lethal second-strike capability to retaliate against a conceivable first preemptive strike by an enemy (mainly China).
-
The Arihant class hull features twin flank-array sonars and Rafael broadband expendable anti-torpedo countermeasures.
-
After launching of the 3 Arihant Class subs Indian planners envisage development of two SSBN size submarines - probably of similar size (12,000 ton) and design to the Akula II that India is due to lease from Russia early next year.
-
Why has Arihant been officially unveiled now, in such an incomplete condition? Perhaps due to:

- the Navy had to show it was getting somewhere. The need of the Indian Navy and weapons development organisations to show the public and politicians where the huge amount of development money, man hours and other resources have gone. Although the submarines were first envisaged in the 1970s ongoing problems, mainly with the reactor, have lead to delays.

- the Indian PM was under attack for perceived concessions to Pakistan and needed to burnish his national security credentials.

- a means of indicating great power status. Only the five permanent members of the UN Security Council (P5) have been able (or permitted) to develop and build nuclear submarines - that is the United States, RussiaFranceBritainChina. India has now forced its way into the nuclear sub owning club on the way to its broader campaign of achieving (P6) membership.

- the India-U.S. nuclear deal represents de facto recognition of India’s nuclear weapons program. This makes the unveiling at this time of a nuclear submarine that will be nuclear armed less politically sensitive.

- probably the most important reason to unveil now is to give the appearance of keeping up with China - to a limited extent. Arihant is a clear sign that India is looking to meet the future regional naval threat from China. The Chinese fleet of 62 submarines, with at least 10 of them nuclear-powered, is on the way to fielding the new JL-2 SLBM.
-
The Chinese JL-2 missile has a strike range of over 7,200 km. When fired by Jin SSBNs from protected Chinese waters (the Jins need protection from highly active US anti-submarine forces) a JL-2 is capable of reaching India and Australia (including Perth and Brisbane). The required range would be 12,000 km to hit the continental US from Chinese protected waters around the SSBN base at Sanya, on Hainan Island, China.
-
Some Extra Points
-
It seems the DAE ran a facility called "Plutonium Recycling Project" that had nothing to do with Plutonium or recycling. With the Arihant launch, they threw open the doors of a facility restricted even to other DAE scientists and let the media take photos. They toured the "half boat" reactor and interviewed Anil Kakodar who stated they were able to build reactors to power future aircraft carriers if the Indian government so requested.
-
The sub design is interesting. Nothing like the Charlie class. In the early 90s, India built two German HDW209 subs at Mazagon docks in Bombay and studied plans for the Project 75 Scorpenes. I think they learned quite a lot from those western boats. There is also a Russian Kilo that has been undergoing mid life refit for half a decade just meters away from the facility where the ATV was assembled. It has been literally cut open. Some speculate that the delay in refit was actually for training ATV-Arihant workmen.
-
The limber slots and sail mounted planes don't look anything like the Akula (of the coming Nerpa/Chakra). Yet the Russian Ambassador to India stated in an interview that the ATV is based on the Akula:
-
A high percentage of Indian arms equipment still has a high Russian content - with Arihant benefitting from Indian access to Western sub technology and those 140 Russian consultants.
-
There is still the Agni SLBM version to be produced and the matter of its range. Given that India has been producing large diameter solid rockets (for its civilian space programme) for a lot longer than China, we may see this missile gap also close.
-
Charting the development of the Arihant Class, particularly its reactor(s) and armament, is an ongoing process. More posts will follow.
-
Pete
Posted by Pete Links to this post
Labels: Akula, Arihant, ATV, K-15, Nerpa
Newer Posts Older Posts Home
Subscribe to: Posts (Atom)