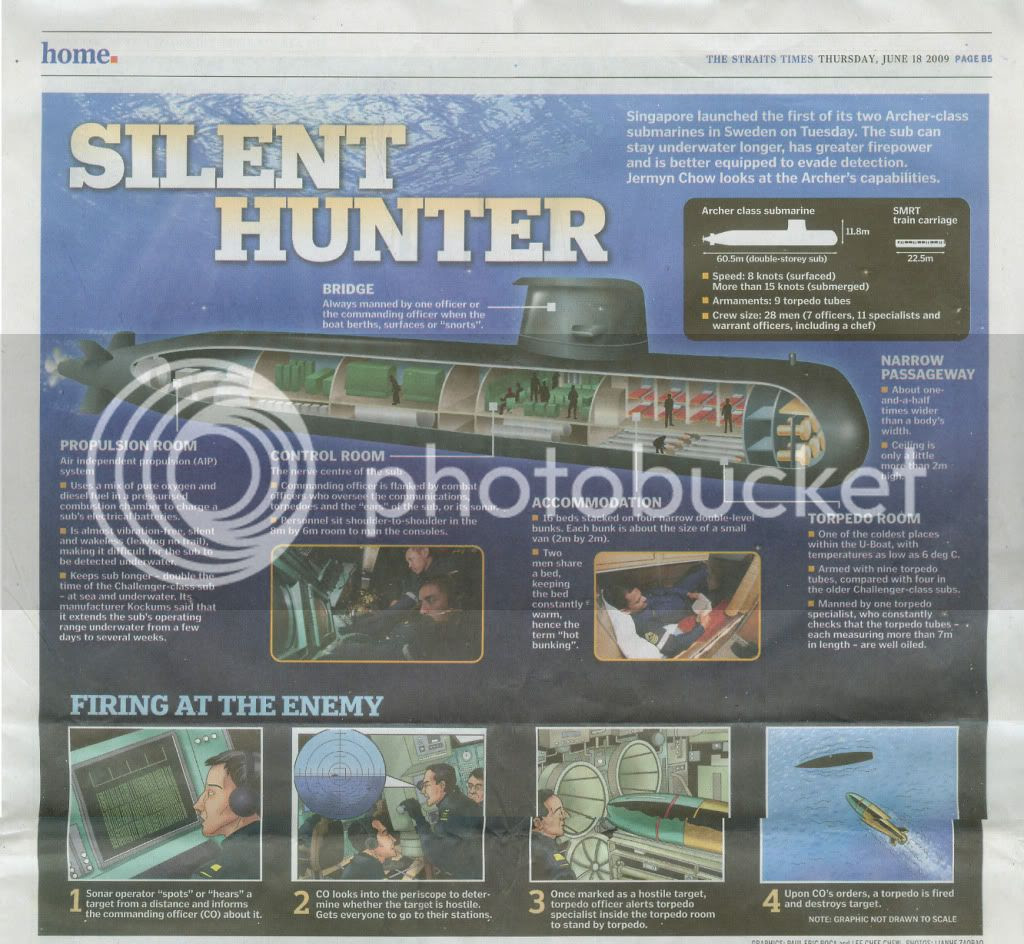 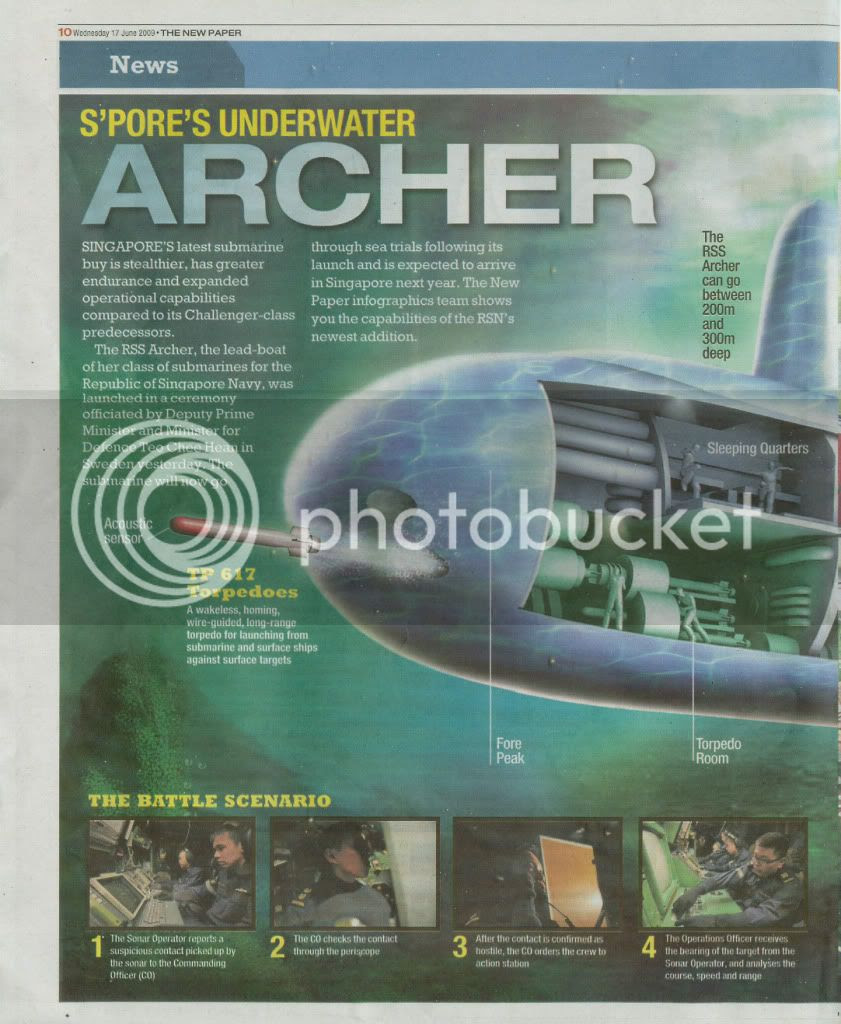 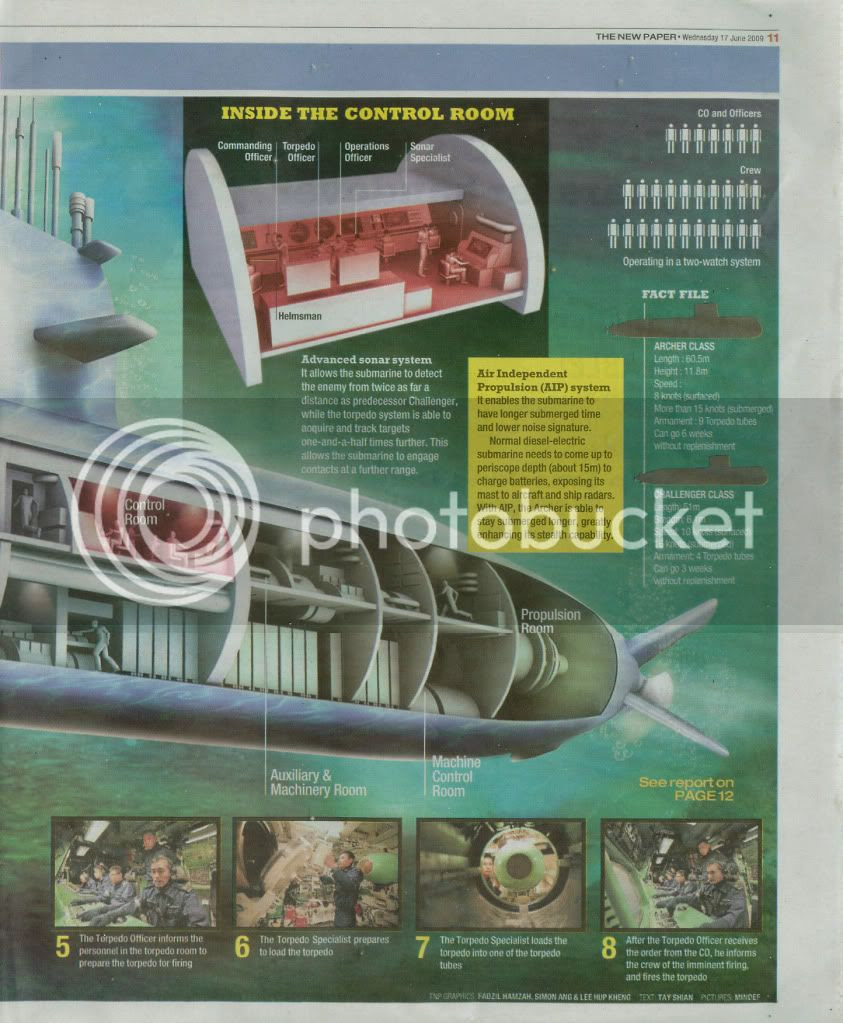 Singapore has been a shrewd buyer of used Kockums built submarines and then had them upgraded. Along with Australia Singapore is one of America's closest allies in the Southeast Asian/Oceania region. Singapore is also on good terms with India while wary of its larger neighbours Indonesia, Malaysia and further afield China.

Singapore's Modern Upgraded Archer Class SubmarinesThe two Archer class submarines are replacing the four Challenger class submarines. Singapore's Ministry of Defence maintained its relationship with Kockums and in November 2005 signed an agreement with Kockums for the supply of two Archer class (known in Sweden as Västergötland class) submarines to the RSN. Originally launched in the mid 1980s and previously in reserve with the Swedish Navy, the submarines have been transferred to the RSN on completion of the modernisation (including upgrade to Air Independent Propulsion (AIP)) and tropicalisation (including modified air conditioning, marine growth protection systems and corrosion-resistant piping).

RSS Archer (photo above) was relaunched in Sweden on 16 June 2009. The Archer class submarines  AIP system enables longer submerged endurance and lower noise signature. This makes them well suited to short-medium range operation in the narrow waters around Singapore including anti-piracy surveillance. The advanced sonar system allows the submarines to detect contacts at a further distance, while the torpedo system has a better target acquisition capability, which allows the submarines to engage contacts at a further range.

Concerning the commissioning of RSS Swordsman

The last of Singapore's most advanced submarines was declared battle-ready on [30 April 2013], sharpening the capabilities of the Republic of Singapore Navy (RSN) in underwater warfare.

The RSS Swordsman was commissioned, following more than two years of tests and torpedo-firing exercises in Sweden and in the warmer and more corrosive waters here. The 60.5m diesel-electric vessel arrived in Singapore in last December. This is the second Archer-class vessel to be added to the RSN's 171 Squadron, after the first, RSS Archer, was declared operational in 2011. The submarine squadron also comprises four ageing Challenger-class submarines.

Deputy Prime Minister Tharman Shanmugaratnam, who was at the ceremony in Changi Naval Base, said the new vessel will strengthen the navy's ability to safeguard Singapore's "continued and unimpeded access to the maritime routes".

He noted that Tuesday's ceremony also marked the end of the RSN's eight year journey to replace some of the Challenger-class submarines, which were built in the 1960s.

With the AIP and the state-of-the-art sensors, the Archers boats are more capable than Indonesia's two HDW 209s and probably more so than Malaysia's two new but non AIP Scorpene's.

Singapore's submarines probably operate close to home (in and close to the Straits of Malacca) and probably work in close cooperation with America's SSNs possibly Australia's Collins class SSKs and other anti-submarine assets. Little has been written in decades about submarine cooperation.

Singapore's Archers with AIP might be superior overall to Australia's unreliable, non-AIP Collins SSKs (although the Collins have a superior (US SSN grade Modified Raytheon CCS Mk2 (AN/BYG-1)) combat system).

In 1995, the Republic of Singapore Navy (RSN) acquired a Challenger class (formerly known as Sjöormen class built by Kockums) submarine (RSS Challenger) from the Swedish Navy and another three (RSS Conqueror, Centurion and Chieftain)  in 1997, making them Singapore's first underwater platforms. As the submarines were designed by the Swedish for operations in the cold Baltic Sea, various modifications were required to suit them to tropical waters. A comprehensive tropicalisation programme was carried out for all four submarines, which involves installing air conditioning, marine growth protection systems and corrosion-resistant piping.

It is believed that the Challenger class were purchased to develop the required submarine operations expertise before selecting a modern class of submarines to replace them, since all the boats were launched in the late 1960s. The four Challenger class submarines form the 171 Squadron of the RSN. On March 12, 2013 Singapore's Minister for Defence, Dr Ng indicated the RSN's ageing Challenger-class submarines are due for replacement [presumably by the two Archer class] and are coming to the end of their operational lifespan.


Its complicated Ram Probably a bit like Australia's relations with China - wary but not hostile. Singapore's mainly Chinese ethnicity can spin it in several directions including good relations with Taiwan. Singapore establishing formal diplomatic relations with the PRC at the late year of 1992 indicates hesitancy. Singapore has strong relations with the US. Singapore has been involved in naval exercises with the 4 countries of the on/off again quadilateral "understanding" for the containment of China. In fact just about every country in the Asia-Pacific (India included) have varying degrees of wariness about China, the next superpower. Regards Pete
Posted by Pete on 9/22/09
…………………………………..


Pete, I wonder if there is a consolidation in defense contractors globally. There used to be several aircraft companies in the U.S. Now there are three Lockheed Martin, Northrop, and Boeing. Some day, there may be two if Lockmart or Boeing buys Northrop. With the acquisition of Kockrums, are countries now limited in submarine suppliers, and is this a strategic problem. For instance, if I am Singapore, and I buy HDW submarines, will there be a parts shortage if Russia is pressured by China to pressure Germany by threat of cutting off natural gas supplies, or some other commodity Germany needs and imports? Russia is vulnerable right now since they depend upon oil and gas exports for the nation's income. China has the demand and the cash to buy oil. If the world, and especially the Pacific Basin, are one big Go game, then economics, armed forces, natural resources, and people are all pieces in this game. Consolidating global arms suppliers is may be a smart business move now, but
Posted by jbmoore on 9/23/09
………………………………………….


ISRO has been bashed in the Indian press following the loss of communication with the Chandrayaan probe. Lots of criticism and second guessing by reporters turned 'expert'. Looks like ISRO has had the last laugh.... India’s lunar mission finds evidence of water on the Moon
Posted by Anonymous on 9/24/09
………………………………………….

Hi JB The number of submarine suppliers is so few that the market downstream may well become distorted. The economic crisis has probably accelerated the consolidation of the submarine market. Submarines are so expensive due to stealthiness and high tech electronics that some countries can no longer afford them. In the US only one submarine type is made, the Virginia SSN - only one a year with production shared by just two companies: - General Dynamics subsidiary Electric Boat in Groton, Conn., and - Northrop Grumman's Newport News shipyard. The US makes no conventional subs and Sweden's Kockums may be defunct. So the main competition is: - France and Spain building Scorpenes and - Germany HDW subs. Spain, Japan and Australia also built/are building subs but due to US electronics input carry licensing which prevent their export. Russia's Kilo's appear obsolete and an uncompetitive prospect for developed Western nations. Pete


Kockums is no-where near defunct, tho they continue to be very reliant on orders from the Swedish goverment. Just this last week they got strong indications that their latest class, the A26 (no "real" name yet) would be built. Probably in co-operation with Norway, but a lot of people seem to be expecting Singapore to be interested as well. The fact that Kockums is "owned" by a german company shouldn't concern too much. All the intellectual property is still very much Swedish. Posted by Upandaway on 9/26/09
………………………………..


Kockums still might be operating as usual Upandaway. My anaylsis is a little bit distorted by my expectation of HDW's and ThyssenKrupp Marine Systems' (TKMS) market behaviour. Still, when I looked on TKMS' website ( http://www.thyssenkrupp-marinesystems.com/ ) the link for Kockums ( http://www.kockums.se/ ) was not functioning. Though the link was working 6 months ago. Contrary signals I think. Pete
Posted by Pete on 9/26/09