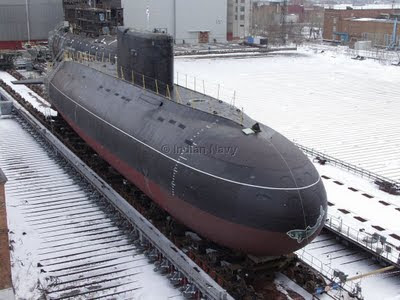 
Indonesia currently has two Type 209 (Type 1300) submarines of the Cakra Class. These are KRI Cakra and KRI Nanggala, both were launched around 1977 and entered Indonesian service in 1981. Both boats have been non-operational for long periods since 1981. Both are recorded as being refurbished in South Korea by early 2012. The refurbishment included strengthening structures and steel sheets, modernization underwater weapons and sonar systems.

Though reportedly refurbished it is unclear whether KRI Cakra or Nanggala are operational. Submarines have a limited service life of usually 30 years or less. This is due to salt water induced corrosion, expansion/contraction causing metal fatigue, other technical problems and obsolescence compared to other submarines. The latter is particularly regarding stealthy characteristics (eg. acoustic noise). So Indonesia has been casting around for replacements for her 36 year old subs.

Indonesia's non-aligned status, experience receiving Russian arms in the 1960s and a low price offer in 2007 from Russia originally suggested Indonesia might acquire Russian Kilo submarine . Presumably Russia would recoup the low selling price by padding out the deep service, upgrade and spare part costs during the Kilo's service lives.

In 2007 Russia agreed at that time to extend a $1.2 Billion line of credit to Indonesia to buy Russian weapons including two Kilos. However this offer lapsed because Russia probably could not afford to extend the credit. The 2008-2009 GFC-subprime crisis and consequent drop in the price of oil (Russia's main export) moved Russia from being a cashed-up oil boom economy in 2007 to being cash-strapped.

"Indonesia had once considered acquiring several Russian submarines, but this deal fell apart over infrastructure financing ([Indonesia] wanted to use Russian export credits to build a sub[marine] base, which [Russia] refused to fund)."

Note that in late 2011 it was apparent Russia had lost in Indonesia's selection process for three NEW submarines.  Indonesia announced it would buy three South Korean "Improved Chang Bogo Class" variants of the German HDW 209 design. One of the Chang Bogos would be built in Indonesia: see http://gentleseas.blogspot.com.au/2014/02/indonesia-to-build-chang-bogo-submarine.html of February 18, 2014 and
http://gentleseas.blogspot.com.au/2011/12/indonesia-decides-to-buy-korean-made.html

By late 2013 Indonesia was again considering whether to buy Kilos or a proposed-advanced Russian development of the Kilo called the Amur Class. On December 7, 2013 the Jakarta Post reported the following [I've bolded interesting parts]  http://www.thejakartapost.com/news/2013/12/07/ri-looks-russia-submarines-with-multi-role-missile-systems.html :

"RI [Indonesia] looks to Russia for submarines with multi-role missile systems"
Indonesia is in talks with Russia on the purchase of a number of Kilo Class submarines, as the country expands its deterrent capabilities in anticipation of future regional disputes. Defense Minister Purnomo Yusgiantoro said on Friday that a team of officials, led by Navy chief of staff Adm. Marsetio, would head to Russia at the end of this month to initiate a deal and assess the technical capabilities of the arsenal. “There is a plan for a massive build-up of our submarine fleet,” Purnomo said in a press conference after an hour-long closed-door meeting with Russian Ambassador to Indonesia and ASEAN Mikhail Galuzin.Purnomo said he could not provide more details as the ministry was still awaiting reports filed by Marsetio regarding his planned visit to Russia. “Further to his report, we can then decide whether to buy new submarines or modernize used ones.”According to Marsetio, Indonesia required “at least one submarine to cover each sea choke point” (a strategic narrow point of passage). He said in total, the country needed a minimum of 12 submarines, as laid out in the Defense Ministry’s Minimum Essential Force strategy.The ministry refused to detail the allocated budget for the submarines. Between 2008 and 2013, defense spending has increased by an average 22 percent to Rp 81.5 trillion this year, according to the Finance Ministry. The budget is slated to rise to Rp 83.5 trillion next year. The planned submarine purchase will be in addition to the three [Chang Bogo] U-209 submarines currently being built by South Korea’s Daewoo Shipbuilding and Marine Engineering (DSME) and state-owned shipyard PT PAL Indonesia.The three submarines will be delivered between 2015 and 2016, and will add to the existing two [HDW 209 Class. Jakarta Post wrongly said the were "Kilo Class"] submarines procured in 1978 from the former West Germany.Purnomo said the ministry’s interest in Russian submarines was based on their advanced cruise-missile system, with which they can accurately target an object at a range of 300 to 400 kilometers. Submarines are known to be effective war machines that can act as a deterrent because of their capacity for stealth. The ministry is also considering a number of weaponry options to be fitted on the existing submarines, such as procuring the Klub-S [or "Club S"  "SS-N-27A" with the NATO reporting name of "Sizzler"] missile system, as well as fitting them with the supersonic, anti-ship Yakhont missile [aka P-800 Oniks NATO reporting name "SS-N-26 Strobile" related to Indian-Russian BrahMos] .
Indonesia has a long history of operating submarines from the former Soviet Union, now Russia. In 1967, it acquired 12 Whiskey Class submarines from the Soviet Union. The new submarines may well be housed at a newly established naval base in Palu, Central Sulawesi, of which only 2.8 hectares of its total 13 hectares have so far been developed.Natural protection against extreme ocean currents is also considered to be a necessary requirement for a submarine base.
The Palu Naval Base will in the future not only serve as a forward base but also a main naval base [see more information on Palu Naval Base at http://gentleseas.blogspot.com.au/2014/01/southeast-asian-states-buying.html ]..." ENDS

In any submarine purchase the cost of training and maintaining multiple crews is high. The program cost of maintenance, basing, spares and upgrades, over and above upfront purchase price, must also be considered. Some Indonesians may have visions of an Indonesian Navy operating more than 10 submarines. This may be unrealistic given the problems Indonesia has had fully utilising and maintaining the current two submarines (Cakra Class).

A similar situation exists in Australia. We can only man around three submarines of six available - but our Admirals and Defence Department wish to expand the fleet to a (probably unrealistic) twelve subs.

The Indonesian Navy became a separate service in 1946, after the Indonesian National Revolution (ejecting the Dutch) began. The Navy was initially stocked primarily with craft once operated by European or the Australian navies. Beginning in 1959, the navy began to acquire a large number of craft from the Soviet Union and East European nations.

In the aftermath of the abortive 1965 coup, however, the navy suffered a decline in influence within the armed forces and the nation because of suspected involvement in the coup attempt (particularly by the marine corps) and because of the navy's small size in comparison with the army.

A large portion of its vessels of Soviet or East European origin were quickly rendered non-operational owing to a lack of spare parts and lack of maintenance expertise. Until the late 1970s, the only major replacements were four frigates acquired from the United States Navy in 1974.

Since that time, the navy has embarked on an upgrading program designed to develop a balanced fleet suited to operations in archipelagic waters. The navy's mission was to act as a territorial force responsible for the patrol of Indonesia's immense coastline. The vast majority of operational ships are stationed at the main naval base at Surabaya, East Java. Whereas the 1970s saw an increase in the fleet's ship inventory, the 1980s witnessed a major effort to improve the navy's armament posture through the purchase of the Harpoon weapons system and the MK-46 torpedo. Purchase of Russian missiles would not come with the political restrictions that come with US weapons.

Structurally, the navy comprises the headquarters staff at Jakarta under the overall command of the navy chief of staff, two fleet commands (the Eastern Fleet in Surabaya, the Western Fleet in Jakarta), the marine corps, a small air arm, and a military sealift command.

In the early 1990s, naval warships generally were not deployed to a particular region but were grouped in mobile flotillas, to be dispatched where needed. One mission concerned patrolling the strategic straits through which foreign ships enter and exit the Indian Ocean, particularly the Strait of Malacca. The other mission centered on halting smuggling and illegal fishing, considered to be problems particularly in the areas near the Natuna Islands and in the seas between Kalimantan and Irian Jaya. In support of the second mission, the navy announced plans to construct a number of limited-role bases in isolated areas in the eastern and western sections of the national territory. Patrol activity also increased in connection with the flow of refugees from Southeast Asia, particularly in the area near the Natuna Islands.
-
Indonesia's main naval priorities are probably anti-smuggling, anti-piracy, refugee boat interception, and protecting territorial boundaries and undersea oil claims (eg. Ambalat) against neighbours like Malaysia. This suggests low intensity conflict patrol boats of 100 to 500 tons should represent the vast bulk of surface ships.
-
This list of Indonesia Navy vessels is useful.
-
The most recent surface ships acquired by the Indonesian Navy appear to be:

- the six Ahmad Yani class frigates were originally launched in Dutch service in the 1960s and commissioned in the Indonesian Navy in 1986.