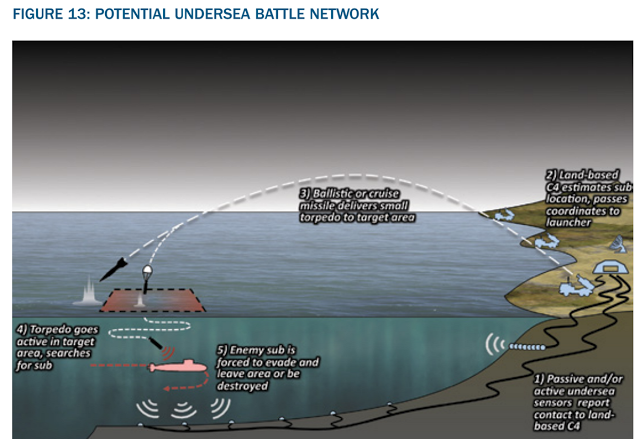 If the pink submarine is a 4,500 tonne Future Australian submarine moving within 50km of the Chinese coast - things may not end well. Chinese undersea SeaWeb sensors may alert (lightweight torpedo carrying) ballistic or cruise missile batteries that a potential target sub is within range. Chinese smart and mobile seafloor mines, sown among the sensors, are another threat. The diagram is  on page 16 of American ex-submariner, Bryan Clark’s important paper The Emerging Era in Undersea Warfare, January 22, 2015.
---

As the USNS Impeccable found in 2009 the Chinese resent intelligence gathering near their shores. Impeccable was also suspected of sowing US undersea SeaWeb sensors on the approaches to China's nuclear submarine base at Yulin/Sanya on Hainan Island. 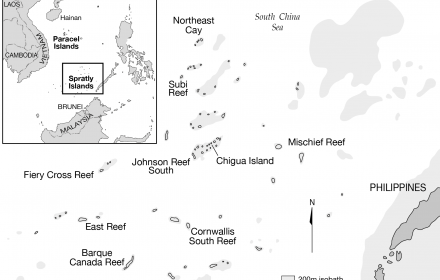 The ocean-island geographies of the South and East China Seas are tailor-made for the growing development of China’s SeaWeb networks. Such networks may include lines of sensors from Chinese island air/naval bases (eg, Subi, Fiery Cross and Mischief Reefs). See map above

Soon Scarborough Reef (or Shoal) only 140 miles (220 km) from Manila Philippines, may be added to the list of new Chinese island air/naval bases. A SeaWeb sensor line may also be strung between Scarborough and the large Chinese base island of Hainan (see red dashed line on the map below). 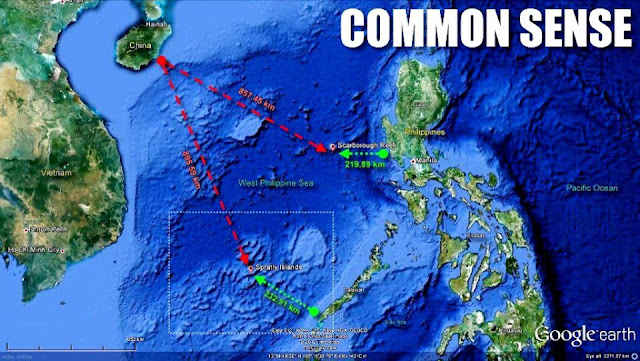 Harry Kazianis, writing in the Asia Times, has produced a very interesting body of articles on the China threat to Western interests in East Asia. His article “Coming soon to the South China Sea: Beijing’s best weapons of war”, March 25, 2016, in part, deals with China’s SeaWeb development:

"Sonar nets: While not an outright kinetic-style weapon, stringing together a sophisticated sonar network that could seekout US submarines – the very heart of America’s efforts to negate China’s A2/AD strategy — could provide a decisive advantage.

While there is little in English-based open source documents, Lyle Goldstein and Shannon Knight have uncovered various Chinese language open source materials that show Beijing is working on — as of at least 2014 — sonar net test sites in the East, South and Yellow Seas. It stands to reason that China has continued to work on and enhance such efforts. If Beijing were able to perfect such technology and deploy such a capability in such a manner where a new sonar net was set up in around China’s new islands in the South China Sea, such a system might make Washington very wary of deploying advanced nuclear-powered subs there in a crisis. As I explained back in 2014:

“If Beijing were to perfect such technology it could largely negate the military capabilities of America’s submarine forces, which in many respects are the foundation of the budding Air-Sea Battle operational concept [and very likely its successor, JAM-GC]. If China were able to field such a network … American subs could be pushed back beyond the range of such networks. This would impact the ability of American forces in a conflict to deliver kinetic strikes on the Chinese coast [and as well as China’s new South China Sea islands] by way of Tomahawk Land Attack Missile (TLAMs). Considering the investment Washington is making in new versions of nuclear attack submarines, specifically a new version of the Virginia Class that includes a new payload module to carry more TLAMs, Washington would be wise to consider how to respond to Beijing’s latest move.” [see WHOLE ARTICLE BY HARRY KAZIANIS]

Large Australian, US or Japanese UUVs could perform and intelligence gathering tasks required near the Chinese coast. Such UUVs could be submarine, ship launched, air-dropped. They could also be  launched from friendly coasts or islands in the region. Being much smaller than subs UUVs are harder to detect. And no crews to lose.


Pete
23 comments: Posted by Pete Links to this post

DCNS indicate that the "Shortfin" contender for Future Australian Submarine is to be a conventional (diesel-electric) version of the nuclear propelled Barracuda SSN (Suffren class). Barracudas laid down 2007 - first may be launched in 2017. Table based on https://fr.wikipedia.org/wiki/Classe_Suffren_(sous-marin)#Noms .
---

The Shortfin that France is offering is to be a conventional version of the future Barracuda SSN. The first Barracuda, the Suffren, was laid down in 2007 and apparently will be launched late 2017 (see Suffren's future crew article) and commissioned late 2018.

What occurred in the decade (so far) of Barracuda/Suffren's construction has not been explained to the Australian public or appeared in the media. Apparently the French Government delayed the construction schedule due to:

"The fall of the USSR and the new world order, with its low intensity conflicts and the increase in maritime traffic, have upgraded the role of navies. The evolution of the missions has significantly delayed the replacement schedule of the six SSNs of the [current] Ruby [Rubis] class ...by six attack submarines [the Barracuda SSNs]. The Barracuda definition phase started in October 1998 and design phase in 2002 for the then planned [launch and] tests in 2008 and [entry into] service in 2010. In 2015, the commissioning of the first in class [Suffren] was postponed [to] 2018 as a result of budget difficulties."

The French Government then reasoned the 8 year delay offered the advantage of being able to smooth (budget and labour force) transition from the last Barracuda (launch around 2028) to the development of the SSBN class replacing the current Triomphant SSBNs. Replacement SSBN class design work will accelerate from the late 2020s with perhaps the replacement SSBN first of class being laid down around 2037.

These need to redesign, re-budget and program transition reasons for the delay in launching the Barracudas have made sense to the French Government that ultimately owns DCNS but it still involves much non-scheduled uncertainty - something ASC is already too good at. The private competitors to DCNS in Australia's Future Submarine contest (that is TKMS, MHI and KHI) would find it unprofitable to have the first 3 submarines of a class (see Table above) sitting in huge sheds  under construction for 10 years (on average) before those 3 submarines are actually launched.

The Australian war-ship-building industry can benefit from greater certainty and discipline in what is Australia's most expensive defence project ever.

The Japanese Soryu's building record [Table below] with the prototype for the Australian Soryu [if Japan is chosen] shows certainty not only down to yearly milestones, but frequently down to the month. Very methodical, on-time, on-budget.

Pete
21 comments: Posted by Pete Links to this post 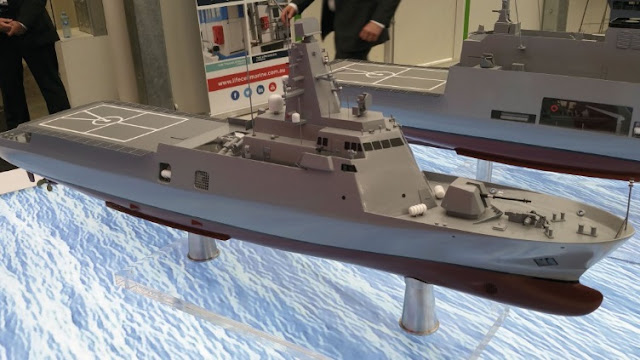 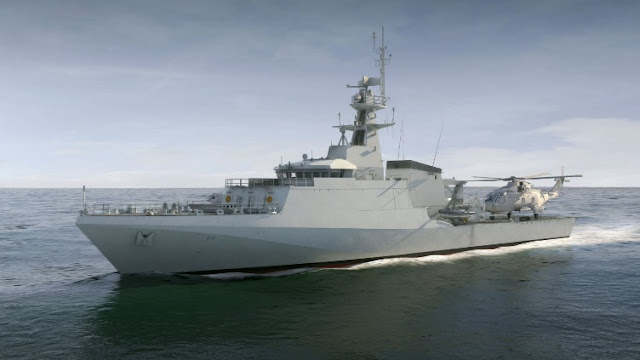 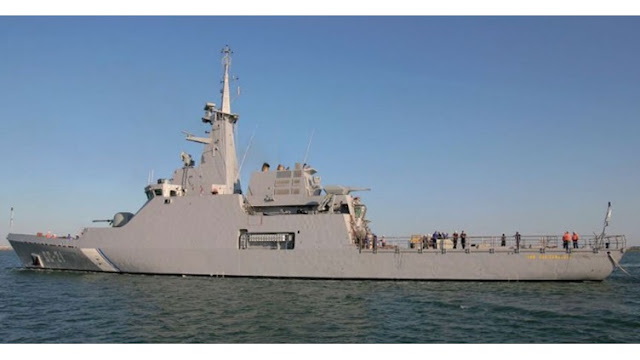 While Submarine Matters has been focussing on the, at times, vitriolic Future Submarine CEP debate other Australian non-sub acquisition processes are intrain.

This includes the current SEA 1180 Offshore Patrol Vessel (OPV) Competitive Evaluation Process.
The OPV CEP has the more specific name “Analysis of OPV Alternatives” and is seeking to assess existing off the shelf vessels with minimum changes.

Compiling a shortlist of (ideally) three or more was outsourced (?) to UK based BMT Defence Services in September 2015, BTW here is a BMT PDF Paper which seems to be on the OPV. The short list, with indicative costs, is due mid-2016. Australia's Defence Department is due to present a recommendation to Prime Minister Turnbull (if he’s there after the 2016 Election) and then to the  broader National Security Committee of Cabinet to make decisions.

The construction of OPVs has been brought forward by two years, with a continuous onshore build projected to commence in 2018 [see 2016 Defence White Paper (DWP) paragraph 4.118].

Twelve OPVs are being built to progressively replace Armidale Class Patrol Boats (which are rapidly wearing out in part due to searching for refugee vessels). See 2016 DWP paragraph 4.117.

The new OPVs will be:

-  much larger and more capable ships than the 300 ton Armidales
-  will have a helicopter
-  probably will be UAV, UUV and surface SUV capable
-  have a longer range and endurance than the Armidales
-  no SEA 1180 OPV capability requirements have been publicly released(?) but it could be a vessel of around 80m and 1,500 tonnes
-  large enough to accommodate a reasonably sized gun (30 - 56mm?)
-  and to safely operate the helicopter.

The new OPVs will be a substantial purchase - see the 2016 Defence Integrated Investment Program (DIIP), page 89, Table 6, which contains the following mentions:

DCNS, Fincantieri and Damen may also be possibles for the shortlist of three or more.

The OPVs may be assembled in many shipyards around Australia but I’d say probably in Perth, WA and/or Williamstown, VIC.

Pete
37 comments: Posted by Pete Links to this post

There's a good article, of March 16, 2016, on the Australian Naval Institute website. This is by Hugh White, Professor of Strategic Studies at the Strategic and Defence Studies Centre, ANU. This article at http://navalinstitute.com.au/risks-in-japanese-submarine-partnership/ first appeared in The Age newspaper.

"What kind of co-operation will we get from Japan if in say, five or 10 years, with the project well under way but no subs yet delivered, Japan faces a confrontation with China and we don’t give it the support it expects? Why wouldn’t Japan walk away from the project, or start putting tight limits on what [sensitive submarine technology] it is willing to share with us?

That would be a disaster for the submarine project, and for our relations with Japan. So we’d be much better off keeping them separate. The beauty of the German and French bids is that their bids are so much simpler. They are only in it for the money, and that’s a good thing, because that is a price we know we are willing to pay."

[see the whole article on the Australian Naval Institute website]

MHI and KHI are very methodical, building submarines for Japan, on-time, on-budget, for decades (since the 1960s).