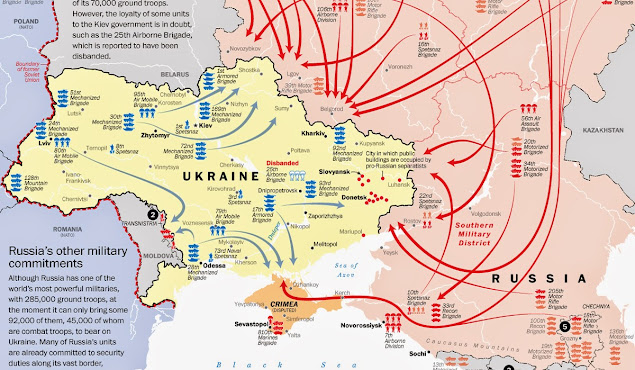 Russian forces deployed in early May 2014 for a possible invasion of part or all of Ukraine. Click on map to expand to full size. Map courtesy of the Royal Unitied Services Institute (RUSI) reproduced in full at .
---


Russia has a history of invading and/or starving countries and territories unfortunate enough, to be parked near/next to Putin's Empire. Unfortunately the Ukraine is no exception.
Overall Obama seems to follow the Democrat "wet" dictum of avoiding confrontation at all costs. Obama may be calculating what is doable but charisma and rat cunning can work surprisingly well. Obama can't seem to motivate America's European allies into forming a united front - especially noticeable over Syria, now Ukraine.
Along those lines I suspect that Obama, Hagel and Kerry assess Ukraine as too far in the Russia sphere to save. In terms of other failures in the works it'll be interesting to see if Afghanistan collapses to the Taliban while Obama is still in office or just after he leaves. It would be unfortunate if Obama, America's first "Black" President, is grouped with the failed Jimmy Carter and then also suffer's the Nixon-like fate of not Viet-... but  "Afghanistan-isation".
I suspect Putin is attempting to tap Russia's main strengths while the going is good. That is utilising Russia's oil-gas economic power before the world's unconventional oil and gas resources become fully on stream. The new technology oil and gas from the US and Canada will make traditional source countries less powerful for a period.

Putin also wishes to use Russia's comparatively powerful military (conventional and nuclear) before Russia's military is relegated to third or fourth place behind China and India. Even if Russia has types of alliances with China and India - leaders like Putin (he may well still be in power in 2030) would not want Russia to be merely a junior ally.
Also the going is good for Putin while the weak Obama is still in office - a hawkish Republican would be a different matter.

On Russia gradual takeover of Ukraine there appears to be increasing hope in NATO countries that a Ukraine divided into federal regions may well be the most promising solution for both Kiev and Moscow. However there seems to be increasing disagreement in eastern Ukraine on whether to:
- remain in Ukraine as a federal region or- unite with Russia, or- form a People's Republic of Donetsk (see http://news.ninemsn.com.au/world/2014/05/08/21/13/ukraine-rebels-vow-to-hold-referendum )Such disagreement and fragmentation appears to be increasingly like the Balkans in the early 1990s (where Croats, Serbs and Bosnian Muslims fought each other and borders shifted).Many in eastern Ukraine want an Independent or Russian Eastern Ukraine referendum on 11 May 2014 while there also seems to be some agreement between Kiev and Moscow on national Ukrainian elections on 25 May 2014.In terms of standards of living uniting with Russia may have advantages. Ukraine has a nominal GDP per capita of $3,862 (even lower in eastern Ukraine) while the Russian figure is $14,818. See right sidebars of http://en.wikipedia.org/wiki/Ukraine and http://en.wikipedia.org/wiki/Russia The Ukrainian standard of living might take a couple of decades to move from poverty to the Russian level. Money versus independence?

Below is an article I wrote. It was published today on ON LINE opinion - Australia's e-journal of social and political debate - at http://www.onlineopinion.com.au/view.asp?article=16286

Ukraine: can anything save it?

Much has been written about Russia’s slow motion domination of Ukraine. The gradual nature of this process and the tactics Russia is using makes it all the more difficult for the West to respond effectively. This article in part argues that a major Russian objective is to dominate Ukraine in order to protect Russia’s diminishing strategic buffer zone. This buffer zone is principally valued because it protects Russia’s heartland from aggressive foreign forces. In this context these forces are military but to a much lesser extent, in Putin’s xenophobic Russia, they may be economic and cultural forces.

The following does not aim to legitimise Russia’s actions but seeks to provide some perspective. Most great powers assume that might is right in their own backyards. It’s the smaller, weaker neighbours like Ukraine that suffer.

Russia’s buffer zone has been tested twice over the last hundred years. Both times, in World Wars One and Two, this zone served to slow down German invasions. Russia had been invaded by many others earlier, including the French, Poles, even the Swedes. Since the end of the Cold War NATO has steadily expanded to include the former buffer countries of Poland, East Germany, Bulgaria, Hungary, the Czech Republic, Slovakia, Rumania, Latvia, Lithuania and Estonia. The Russian leadership don’t want Ukraine to also join NATO as they see Ukraine as a dependent region of ancient Russia. As well as being a large country (by European standards) Ukraine has too many natural resources, including grain, and too large an army to lose to the West. Ukraine in NATO would almost complete the removal of Russia’s buffer zone – leaving only Belarus and Finland as buffers.

Ukrainein its efforts to move closer to the West has been totally outmanoeuvred by Russia’s use of special forces directed “civilians”. This is even when these “civilians” successfully use man portable surface to air missiles. Ukraine is finding that its army and police forces are generally unwilling to fire on these pro-Russian “civilians”. Instead there is increasing reliance on pro-Ukrainian militias. The danger of militias lies in their uncontrollable tendency to indiscriminately fight for their own goals rather than for Ukraine’s.

The ability of the US to criticise Russia on moral grounds has declined due to America’s long term and more recent actions. The former include more than a century of US invasions of weaker countries in its own Latin American backyard. During the 1980s the US invaded Panama and Grenada for rather trumped up reasons. In a campaign similar to Russia’s today the US (in the mid 1980s) organised and armed right-wing “contras” to bring down the government of left leaning Nicaragua.

The West has suffered from disunity in imposing sanctions on Russia. EU countries trade heavily with Russia and many rely on Russia’s oil and gas exports (a powerful Russian economic weapon). A trade deal that has angered the US has been France selling two large amphibious assault ships to Russia - with one delivered since the Ukrainian crisis began.One of these ships just happens to be named the Sevastopol the home port of Russia’s Black Sea Fleet in Crimea, where this whole Ukrainian crisis started. More to the point these ships are particularly suited to such operations as a Russian invasion of Ukraine or of other countries Russia may wish to invade to rebuild its buffer zone.

The Russians have done their best to boost US-EU disunity by conducting electronic spying on the US. Russian monitoring of a phone call that included a US Assistant Secretary of State (Victoria Nuland), yielded an embarrassing comment from her concerning EU policy on the Ukraine - which was “F--k the EU”.

As the crisis in Ukraine escalates this may impact on Australia in several ways, including higher world oil prices causing some damage and higher world grain prices that would benefit Australian farmers. Eventually some US military forces that might have been useful in our region may be shifted to Eastern Europe (see this report).

Ukraine has no easy choices. It can’t rely on the West and Russian treatment of Ukraine in living memory has been close to genocidal. Under Stalin the Russians intentionally starved Ukraine in part to break any feelings of Ukrainian nationalism. This imposed famine in 1932-1933 was called the Holodomor (Death by Hunger). At least four million Ukrainians died.

Like Poland Ukraine has the misfortune of living next to historically cruel neighbours. Can anything save it?"
Posted by Pete

For locating this 2014 article and for your praise, of course :)

I'd actually forgotten about this article.

As most of it seems still valid, I've republished it at https://gentleseas.blogspot.com/2022/02/ukraine-may-9-2014-article-remains-valid.html

Pete
Pete runs Submarine Matters. If Australia wants truly independent foreign/defence policies, we are so isolated we need to develop a convincing deterrent against China, far sooner than any Aus SSNs arrive (or not) in the 2040s. Pete has 40 years experience with all military arms, has published more than 2,000 reports. Master of Strategic Studies - High Distinction Average. If you've arrived at an old blog article, to get to the latest article, just click on the largest (Blue) SM title up top. Best way to navigate this site is to put a keyword in the search box, top left corner. Reader Comments below articles are a major feature of SM.