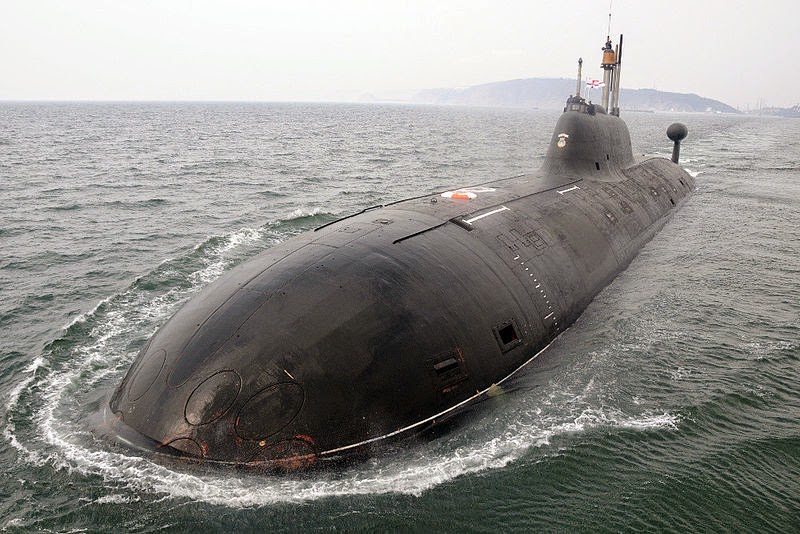 India financed the completion of INS Chakra (a Russian Akula 2) above - is long leasing it - and commissioned it into the Indian Navy in 2012. It is likely any Indian built SSN would draw heavily on Akula 2 technology with Russian assistance. See Pete's comment below.
--- 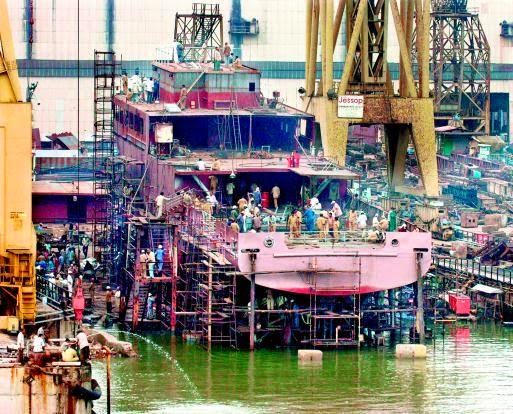 Hindustan Shipyard (Visakhapatnam) - referred to in article below.
--- 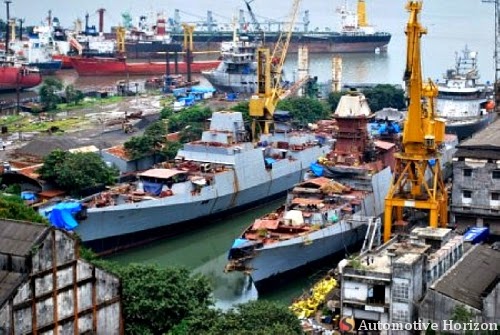 Mazagon Dock (Mumbai). - referred to in article below.
---

-  India's Rising Nuclear and Conventional Submarine Force, May 21, 2015 http://gentleseas.blogspot.com.au/2015/05/indias-rising-nuclear-and-conventional.html and

-  South Asian Submarine Issues, December 7, 2014 http://gentleseas.blogspot.com.au/2014/12/south-asian-submarine-issues.html concerning the construction of India's emerging SSBN base at INS Varsha on the East coast below Visakhapatnam.

Rajat Pandit in the Times of India article below is overly gullible in accepting that India can deploy substantially more submarines in the short-medium term. There are plans to launch two more Arihant class SSBN in the next few years, but very little detail about SSN plans and very tentative SSK completion plans. Plans include:

- 3 Arihant class SSBNs (including INS Arihant launched in 2009. Within this class:
= S-1 is the half submarine reactor test rig at Kalpakkam (India's southeast coast, just south of Chennai)
= S-2 is INS Arihant itself (undergoing trials - may never be operational).
= S-3 is INS Aridhaman (under construction at Shipbuilding Centre Vadodara (India's west coast, north of Mumbai) or Shipbuilding Centre Visakhapatnam (east coast) prior to launch perhaps in 2015)
= S-4 no name yet (under construction Shipbuilding Centre Vadodara prior to launch perhaps in 2016)

- 6 (yes 6) SSNs - to be constructed at Visakhapatnam. Few details, no date milestones. This very old FAS report indicates India has been interested in building or buying 6 SSNs since the 1950s, with Russian assistance, for fleet protection, mainly against Chinese subs. India financed the completion of INS Chakra (ex Nerpa) (a Russian Akula 2) - is long leasing it - and commissioned it into the Indian Navy in 2012. Since commissing Chakra has been almost invisable. It may not be operational but rather a full test model for examination and trials by the India Navy, DRDO and India's nuclear reactor sector. It is likely any Indian built SSN would draw heavily on Akula 2 technology and be built with Russian assistance.

Rajat Pandit, TNN | Jul 14, 2014
NEW DELHI: There is finally some urgency [words require deeds] being shown to rescue India's ageing and depleting underwater combat arm. The approval for two long-pending projects, one for construction of six advanced diesel-electric submarines and the other for six nuclear-powered ones, is well on the cards now.
Sources said the finance ministry has asked the defence ministry to "club" the separate projects to "draft a single note" for the requisite nod from Cabinet Committee on Security (CCS). "The two projects have been languishing for long in the files being exchanged between the two ministries. The government seems serious about fast-track approvals this time," said a source.
The approvals, when they come, will not be a day too soon since India is down to just 13 old diesel-electric submarines, barely half of which are operational at any given time, and a single nuclear-propelled submarine INS Chakra on lease from Russia without any long-range missiles.

It takes at least seven to eight years for the first submarine to roll out once its construction project actually gets underway. The two projects will together entail a cost of well over Rs 1 lakh crore spread over 10-15 years.
'Project-75India' for the six conventional submarines, armed with both land-attack missiles and air-independent propulsion (AIP) for greater underwater endurance, was granted "acceptance of necessity'' in November 2007, as was reported earlier by TOI.
But the global tender to select the foreign collaborator for it is yet to be even issued. As per the existing plan, the first two submarines will be imported to save time, while three will be constructed at Mazagon Docks (Mumbai), and the sixth at Hindustan Shipyard (Visakhapatnam).
The project to build the six SSNs (nuclear-powered attack submarines, usually without nuclear-tipped missiles), in turn, is to be undertaken at the secretive ship-building centre (SBC) at [Visakhapatnam]. India's first three SSBNs (nuclear-powered submarines with nuclear ballistic missiles) are already being built at the SBC to complete the country's nuclear weapons triad - the capability to fire nukes from land, air and underwater. The expertise gained in the construction of the SSBNs will help the SSN project, said sources.
The first SSBN, the 6,000-tonne INS Arihant, is slated to go for extensive sea trials soon after its miniature 83 mw pressurized light-water reactor, which went "critical" in August last year, attains "full power" in another month or so. The second, INS Aridhaman, is also to be "launched into water" soon with its hull and basic structure ready.
China, incidentally, has five nuclear and 51 conventional submarines. It is poised to induct up to five JIN-class SSBNs, with their new 7,400-km range JL-2 missiles, over the next few years.
India, however, has miserably failed in this arena. It was in 1999 that the CCS had approved a 30-year submarine-building plan, which envisaged induction of 12 new submarines by 2012, followed by another dozen by 2030.
But 15 years later, not a single new submarine has been inducted because of politico-bureaucratic apathy. The first programme, Project-75, was finalized only in 2005 to build six French Scorpene submarines at MDL. It's already running over four years behind schedule, with the first Scorpene now slated for delivery by November 2016 and the other five rolling out thereafter every 8-10 months. Moreover, the Rs 1,800 crore contract to buy 98 heavy-weight torpedoes to arm the submarines is also yet to be inked."

Today u laugh at the Indian submarine program ,but tomorrow u will live in fear of Indian subs because your own country (Australia) does not even have a sub building progr at all.
To Fosters drinker

As of now only three Arihant SSBN are ordered not six.
Anyway I like that Manager's picture xD

Hi Pete,
Wow when has any nation other than china kept pace with these timeframes , that said I guess it is true whatever be India's reason for building the SSBN its will cause reaction in the immediate IOR region not so much beyond Malacca straights though. I believe the second commenter is right there was to be three SSN and three SSBN I may be wrong
Cheers
Harish

I laugh at the military projects of many countries including Australia's.

It is rare when a project isn't overbudget with years of missed deadlines.

One can only pray that Australia doesn't again have a home-built submarine building project.

Yes she is prettier and more experienced than the typical Project Manager.

India has decided to construct more Arihant-class subs, Three more submarines of this class are under construction (known as S-2, S-3 and S-4).

One submarine is being constructed at Visakhapatnam and two at Vadodara. India plans to build six of these submarines in the long term.

The first four vessels are expected to be in commission by 2023 (but I wouldn't hold your breath).

Hi Pete,
S2- Is itself INS Arihant,S-3 is INS Aridhaman & S-4 is the third of the Arihant class. You are wrong in assuming that India is developing 6 Arihant Class SSBN.S-1 is the half submarine that is being kept at kalpakkam for testing purpose. India is developing 6 SSNs for its use though.
Keep up the good work Pete.

Its true that China has bought (from Russia) and built quite a quantity of SSKs. But they appear to be of average, derivative quality.

China's SSNs and SSBNs still seem to fall far short of predictions. Exaggerated predictions seem to particularly come from Taiwan's WantChinaTimes - eg. http://www.wantchinatimes.com/news-subclass-cnt.aspx?cid=1101&MainCatID=&id=20140710000149 . The US www.defense.gov/pubs/2014_DoD_China_Report.pdf also seems to shoot a bit high on numbers of new Chinese nuclear sub classes. This is based on the few new nukes actually seen - although highly secretive China May have more than revealed.

One would hope US Intelligence internally has an accurate picture.

Thanks for setting straight my ignorance. Your reply looks accurate.

Pete, I have always found you to be a reasonable person. My current comment is on the progress of India's defence projects. Many in India's defense community shared the western world's view that India's projects will always suffer time and cost overruns and that the products will always be of poor quality. Those who are really interested in understanding the trajectory of India's progress in the defense area may see a picture that is different. Due to bad planning, ambitious and changing specifications and underdeveloped supply chain - the initial projects in each product area have and will suffer time and cost overruns. But the subsequent products will not and have not suffered as much time and cost overruns. I expect that the gap between the Chinese technology levels and Indian technology levels in respective product categories will decline continuously over the next decade. Due to lower budgets and stringent requirements of the defense services, Indian R&D operates differently compared to probably any other country. Those products which are finally accepted by the defense services are likely to be quite contemporary in technology levels. Therefore, you can expect delays but the end result may not be inferior !!

Indeed "time and cost overruns" are endemic in the defence projects of most (or all) countries. Alot of it is due to:

- build at home protectionism, which, as a positive increases defence self-reliance, but comes at the expense of higher costs than the most competitive defence builders (one being South Korea)

- nationalistic defence claims by politicians who have electoral cycle timeframes of 3 to 4 years, but complex projects are likely to take 10 to 15 years.

This is in a world where all nuclear powers receive ideas and other nuclear assistance from other countries or nationals (starting with the US getting substantial help from the UK Cambridge and goverrnment and former Hungarian nationals).

India is part of the world - Indian physicists went to UK unis and India had to develop weapons-Pu producting reactors with the help of foreign reactor concepts https://en.wikipedia.org/wiki/CANDU_reactor#Nuclear_nonproliferation

But I digress. Australia has one of the worst shipbuilding records for overruns. The ANZAC frigates were an exception but we are talking the Hobart-class Air Warfare Destroyers 200% over the cost Spain could build them and already years over-due.

Our Build in South Australia drive under an overtly South Australian pushing Defence Industry Minister (Pyne) bodes ill. But it is only taxpayer money... :)

a very good informative comparison. Indian Arihant is somewhere between Xia and Jin Class at present

A short introduction is here http://www.lynceans.org/all-posts/60-year-anniversary-of-underway-on-nuclear-power/ somewhat shorter than the 85 page Part 1 "Introduction".