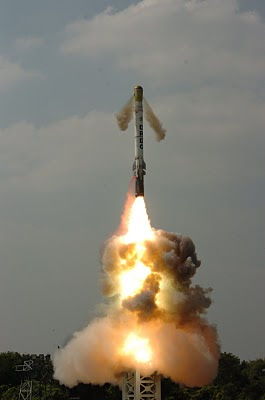 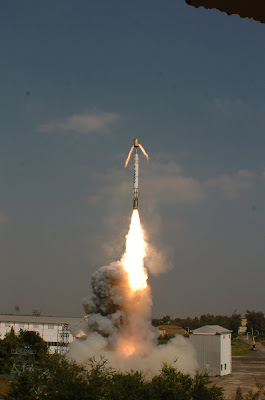 Interesting about the stabilising (retro-rocket?) instrument at top of the K-15 during initial launch phase. I assume it keeps the K-15 upright and gets out of the flight path once detached?
-
The Business Standard, February 17, 2010 reports:

Shaurya surfaces as India's underwater nuclear missile - The country’s top defence scientist has, for the first time, revealed that India’s new Shaurya missile, which can carry a one-tonne nuclear warhead over 750 kilometers, is specially designed to be fired from Indian submarines and could form the crucial third leg of India’s nuclear deterrent.

[India's first indigenously designed nuclear submarine, the Arihant, will be armed with 12 K-15s.]

If launched from a submarine off the China coast, it could hit several Chinese cities like Beijing, Nanjing and Shanghai.

Air and land-based nuclear weapons are delivered to their targets by fighter aircraft and ballistic missiles, respectively. Since these can be knocked out by an enemy first strike, the most reliable nuclear deterrent has traditionally been underwater, missiles hidden in a submarine.

V K Saraswat, the DRDO chief and Scientific Advisor to the Defence Minister, revealed to Business Standard at the ongoing Defexpo 2010, “We have designed the Shaurya so that it can be launched from under water as easily as from land. The gas-filled canister that houses the missile fits easily into a submarine. The underwater leg of the nuclear triad needs to be totally reliable and needs a state-of-the-art missile.”

India’s undersea deterrent had so far revolved around the K-15 ballistic missile, built with significant help from Russia [?]. The K-15 was to equip the INS Arihant, India’s lone nuclear-powered submarine, which is being constructed in Visakhapatnam. But now, after rigorous underwater testing, the Shaurya could be the mainstay of Arihant’s arsenal.

“The Shaurya was developed from ground up as a submarine-capable missile,” confirms Dr Prahlada, the top DRDO scientist responsible for liaising with the military. “Every piece of technology for fitting it in a submarine is already in place.”

Shortly before the Defexpo 2010, Dr Saraswat had publicly stated that India’s missile technology was ahead of China’s and Pakistan’s.

Now top DRDO scientists have revealed that the Shaurya is not a ballistic missile, as it has been thought to be; it is actually a hypersonic cruise missile, which never leaves the atmosphere.

The Shaurya has none of these issues. Its solid-fuel, two-stage rocket accelerates the missile to six times the speed of sound before it reaches an altitude of 40 kilometers (125,000 feet), after which it levels out and cruises towards the target, powered by its onboard fuel.

While ballistic missiles cannot correct their course midway, the Shaurya is an intelligent missile. Onboard navigation computers kick in near the target, guiding the missile to the target and eliminating errors that inevitably creep in during its turbulent journey.

The Shaurya, say DRDO sources, will strike within 20-30 metres of its target after travelling 750 kilometres.

Conventional cruise missiles, like the American Tomahawk and the Indo-Russian Brahmos, offer similar accuracy. But their air-breathing engines carry them along slowly, rendering them vulnerable to enemy aircraft and missiles. The Shaurya’s solid-fuel, air-independent engine propels it along at hypersonic speeds, leaving enemy fighters and missiles far behind.

“I would say the Shaurya is a hybrid propulsion missile”, says Dr Saraswat. “Like a ballistic missile, it is powered by solid fuel. And, like a cruise missile, it can guide itself right up to the target.”

Making the Shaurya even more capable is its ability to manoeuvre, following a twisting path to the target that makes it very difficult to shoot it down. In contrast, a ballistic missile is predictable; its trajectory gives away its target and its path to it.

Wiki explains - "The Shaurya missile is speculated to be the land version of the under-water Sagarika K-15 missile[6], although DRDO officials have reportedly denied its connection with the K-15 program[2] Similar to the BrahMos [in land, sea and air? launched mode], Shaurya is stored in a composite canister, which makes it much easier to store for long periods without maintenance as well as to handle and transport. It also houses the gas generator to eject the missile from the canister before its solid propellant motors take over to hurl it at the intended target.

Shaurya missiles can remain hidden or camouflaged in underground silos from enemy surveillance or satellites till they are fired from the special storage-cum-launch canisters. DRDO scientists admit that given Shaurya's limited range at present, either the silos will have to be constructed closer to India's borders or an extended range version will have to be developed. The Shaurya system will require some more tests before it becomes fully operational in two-three years. Moreover, defence scientists say the high-speed, two-stage Shaurya has high maneuverability which also makes it less vulnerable to existing anti-missile defence systems.[7] Shaurya can reach a velocity of Mach 6 even at low altitudes. On November 12, even before the missile crossed a distance of 300 km, it reached a velocity of Mach 5, heating up its surface to 700{+0} Celsius. The missile performed rolls to spread the heat uniformly on its surface. Its flight time is 500 seconds to 700 seconds. with its high-performance navigation and guidance systems, efficient propulsion systems, state-of-the-art control technologies and canisterised launch. It can be easily transported by road. The missile, encased in a canister, is mounted on a single vehicle, which has only a driver’s cabin, and the vehicle itself is the launch platform. This “single vehicle solution” reduces its signature – it cannot be easily detected by satellites – and makes its deployment easy.The gas generator, located at the bottom of the canister, fires for about a second and a half. It produces high pressure gas, which expands and ejects the missile from the tube. The missile has six motors; the first one is the motor in the gas generator.The centerpiece of a host of new technologies incorporated in Shourya is its ring laser gyroscope and accelerometer. The ring laser gyroscope was tested & integrated by the Research Center Imarat (RCI) based in Hyderabad.[8]

Shaurya missile was reviled to be designed specifically to be fired from Submarines. Top DRDO scientist has confirmed this and said that this missile is actually a Hypersonic cruse missile and not a ballistic missile, as it was earlier thought to be.
-
Comment
-


It seems odd that the DRDO and the Navy are re-announcing the K-15's nature and functions. It could be in place of continual testing milestones that would heighten public support. Still the new information is comprehensive and puts the K-15's capabilities in perspective.

The PAK-FA or T-50 is the talk of the aviation world due to its (allegedly) "first" test flight yesterday.
Unfortunately for modern Tsar/neo-Red Putin, compared to the US and even China, Russia has been unable to maintain financial or technical momentum on 5 Gen Jets.
India has been rightly wary of financing Russia's high risk PAK-FA:

But Airpower Australia (APA) has been reporting on the PAK-FA and has had this artist's rendering since March 2009 due to APA's close personal Russian contacts: 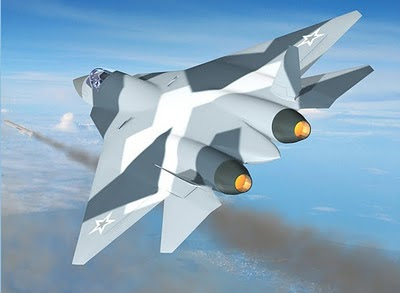 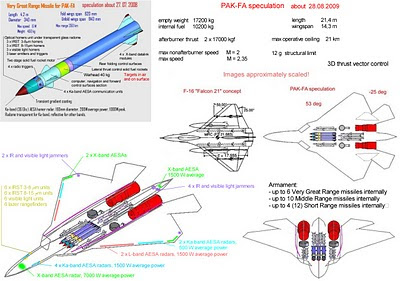 The "fifth-generation" stealth fighter -- Russia's first all-new warplane since the collapse of the Soviet Union plunged the defense industry into poverty and disarray -- flew for 47 minutes, planemaker Sukhoi said.

"It's a remarkable event," Prime Minister Vladimir Putin told his cabinet, but he suggested the plane still needed work. "There is very much to be done, in part as regards the engine," Putin said. "But the fact that the plane is already in the air is a big step forward."

...flight [was] at a Sukhoi factory in Komsomolsk-on-Amur, in Russia's Far East.

"The plane performed very well. All our expectations for this first flight were met," Sukhoi spokeswoman Olga Kayukova said on Rossiya 24 television. "The premiere was a success."

Foreign journalists were not invited.

Fifth-generation aircraft are invisible to radar, have advanced flight and weapons control systems and can cruise at supersonic speeds [F-35 only subsonic cruise!]. The new plane is Moscow's answer to the U.S.-built F-22 Raptor stealth fighter -- the world's only fifth-generation fighter yet in service -- which first flew in 1997.

Putin said the plane would first be delivered to the Defense Ministry in 2013 and serial production would start in 2015. Analysts have said it would probably be five to seven years before Russia's military gets to fly the new fighter.

Successful development of the fighter, which Rossiya 24 said has been tentatively dubbed the T-50, is crucial to showing Russia can challenge U.S. technology.

The 1991 Soviet collapse ushered in a cash-strapped time of troubles for Russia's military. Its aircraft makers have been building warplanes based on updated Soviet-era designs.

...The Interfax news agency quoted an unidentified source as saying the new Russian plane had lowered and raised its landing gear twice during the flight and added that "the American F-35 fifth-generation jet couldn't do that (on its test flight)."

"My impression is that this new fighter plane is also more propaganda than a real expectancy," he told Reuters by e-mail.
Russian Deputy Prime Minister Sergei Ivanov told the cabinet more work had to be done on the engine and the armaments system. Neither he nor Putin went into details.

In a statement on the company website sukhoi.org, Sukhoi director Mikhail Pogosyan said the company planned to develop its fifth-generation fighter program further with India, its biggest client for existing planes.

...Besides India and China, existing clients for Russia's weapons include U.S. foes such as Iran, Syria and Venezuela, and their purchase of an advanced new fighter could cause concern in the United States and its allies.

The U.S. Congress has banned export sales of the F-22. Full Article."
Comment


Unless Russia has engaged in productive espionage to steal F-22 and F-35 secrets it may be a decade before a very expensive PAK-FA, T-50 is rolling off the production lines. The cost of production and purchase, deadline slippage and complexity of the F-22 were vastly greater than expected.


Is it simplistic to say that Russia is doing the designing while India is paying most of the development cost (like the Nerpa)?