A Swedish Mini-submarine or Minesweeping ROV operating near Stockholm?

This article below is now wrong - and has been superseded/corrected by a later Submarine Matters article of November 8, 2018 - that is "Mystery Swedish "not a foreign submarine" Revealed as a "SEAL Carrier"". 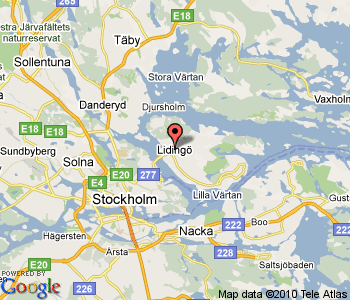 Part based on Kyle Mizokami’s October 30, 2018 article in Popular Mechanics comes this tale. On June 28, 2018, off the Boson peninsula on Lidingö island (see red marker on map above) a group of Swedish children and teenage instructors at a sailing camp near Stockholm saw and filmed (see Youtube below) an unidentified underwater vehicle surface in the waters near Stockholm.

9 seconds in see blurry image of the mysterious submarine (or UUV?) filmed in June 2018. This Swedish language Youtube was uploaded in late October 2018.
---

[Pete comment: A major impediment is that there were no scale (ideally a crewman in the fin/sail) to indicate scale/size of the black watercraft in the Swedish student photography. Was the "submarine" 5m long (surface measurement) or 15m long?]

The kids “observed large air bubbles, then a huge black object rose from the depths, heading east.” The sub disappeared after about 20 minutes. Only a short blurry video recorded the event when 2 or 3 high quality phone/camera images would have been more authoritative.

The Swedish military appeared very unwilling to publicise the student's camera work other than reporting there were no Swedish or foreign submarines operating in the area at the time of the sighting. If no submarine what about a very large Unmanned Undersea Vehicle (UUV) (aka Remotely Operated Vehicle (ROV)?

Possibly, but very unlikely, the small submarine photographed may be a Russian Project 1851 Paltus-class. These “nuclear-powered subs are just 180 feet long, displace 720 tons, and have a top speed of six knots.” But one would expect a Paltus would use its nuclear endurance for deepwater cable-splicing (electronic intercept) missions. Was it splicing a shallow cable for practice?


A little more likely the submarine may have been a conventional modern variant of the Russian Losos/Piranha minisub. Readers of Submarine Matters will recall that Swedish observers spotted mysterious submarine activity in waters close to Stockholm in October 2014 (see here for the Losos/Piranha theory) and also this 2015 article here).

Also a little more likely is that it was a joint Russian/Iranian developed Nahang class small sub of around 375 tons, diesel electric (see photo above) filmed in Persian Gulf-Arabian Sea.

Alternatively and more likely the "submarine" filmed may actually be a very large Unmanned Undersea Vehicle (UUV) (aka Remotely Operated Vehicle (ROV)) being tested and revealed in error. As well as reconnaissance UUVs/ROVs can be used for slow, methodical, minesweeping. This activity may hold arms business sensitivities especially near capitals of neutral countries.

ROVs are not necessarilly orange. They may come in camouflage black for some missions. Many  companies/countries market and foreign test underwater ROV minesweepers.

Anonymous has kindly provided the following model of  Life Cycle Costs of Submarine Building (with referencee to FY2014 Annual Report on Life Cycle Cost Management, 30/May/2015, by the Acquisition, Technology & Logistics Agency (ATLA), Japanese Ministry of Defense (MoD)
http://www.mod.go.jp/atla/souhon/about/pdf/26lifecyclecost_houkokusyo.pdf noting "there is no intention to criticize others."

[Pete Comment - This examination is highly complex as it is:
-  translated from Japanese language, and
-  uses accounting assumptions and methodology
-  and within that, Japanese accounting assumptions and methodology which have different yearly start and finish milestone conventions eg. when looking at "27SS" (see TABLE for SORYU & Oyashio Program at the end of this article) what year was 1SS?

Thorough Management policy of defense spending by Germany brought possible sale of TKMS by ThyssenKrupp, but, there is something to learn.

Though the batch building system has adopted in Japan for submarines to maintain naval superiority, this system has not been adopted by Australia because of Australia's defense budget constraints. Instead, Australia's indigenous submarine building project adopted a system that also satisfies demands of employment and industry.

If Australia's top priority is maintenance of regional superiority, it could consider the introduction of a batch building system because Australia's indigenous submarine building project does not correspond to submarine updates of naval rivals. Australia could consider participation in a foreign batch building system if this is within reasonable costs and these cost savings are used for satisfaction of demands of employment and industry.

Japan's Life Cycle Cost for Soryus 27SS [launched on October 4, 2018] and 28SS [likely to be launched around October 2019] was estimated based on
FY2014 Annual Report on Life Cycle Cost Management, 30/May/2015, by ATLA of the Japanese MoD [1]. If all submarines are built in Japan and operate in Australia (Cases 2-4), totat costs are 3, 11 and 16 billion $AU for Cases 2-4, respectively. Considering adoption of US combat system and development cost, increase in total costs presumably become 20% at most. Total cost, when 4 submarines correspond to next Soryu (29SS series) and 4 submarines correspond to next Soryu (post 29SS series) are built in Japan according to batch building system, is around $AU 13B resulting in huge cost reduction [for Australia]. Building of other 4 submarines is determined in accordance with the situation.

Life cycle cost (hereinafter referred to as "LCC") Management, cost necessary to acquire the equipment is considered not as mass production unit price, but as the total expenses necessary for the entire process (life) from concept, development, mass production, operation / maintenance to disposal. By LCC management, i) acquisition judgement based on cost effectiveness at the turning point such as start of development or mass production, ii) enhancement of accountability related to cost, and iii) decision making based on cost reduction at the operation and maintenance stages become possible. In this way, the purpose of LCC Management is to optimize the cost of the entire lifecycle of the equipment.

In calculation of the LCC, break down the cost* related to the equipment was broke down into the various components and each cost component was estimated by using CBS ** in order to predict necessary cost of the equipment in the future.

Data necessary for the calculation are prescribed number of acquisition and data of the similar equipments in the past, etc. Particularly important data are those considered as high proportion in the LCC, i.e., body cost at the mass production stage, cost of supplies and repairment in the operation and maintenance stages. By using these data and the scale ratio (eg., weight ratio) between the equipment and the similar equipment, the cost necessary for the equipment is estimated. In this estimation, the most recent exchange rates are used, and no price fluctuations are assumed.

* Here, “cost” is a price government pays
**CBS (Cost Breakdown Structure: a tool used for planning of project management. CBS is a cost allocation expressed in a hierarchical structure by classifying project costs in detail)

7. Explanation of the equipment whose LCC estimation is different from last year's Annual Report (skip)

8. Annual report for each equipment

9. Note Expenses such as guided missiles and (actual/training) ammunitions are not included in the LCC estimation.

1. Outline of the equipment

2. Performance of the equipment

3. Method and preconditions of LCC calculation

4. Prediction line against base line for LCC Estimation (skip)