of a mini-unmanned undersea vehicle (UUV) that can operate in swarms "Not only...to discover new species of marine life and track climate change, but in time...to optimise search and rescue operations, locate wreckages and black boxes, and much more." 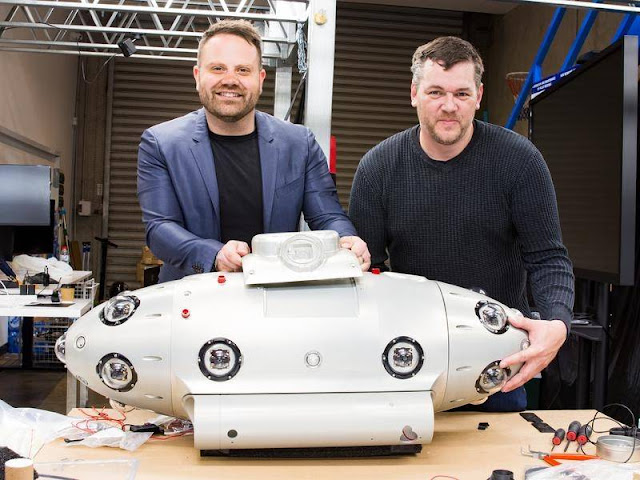 This invention could carry small sonars. This invention and others like it, being developed in China, Japan, the US, UK and Europe could operate in swarms to detect submarines - making submarines an obsolete, increasingly vulnerable technology.

Think of a flotilla 20 low cost Chinese "trawlers" all peacefully "catching fish", but actually acting as a "mother-ship" each for 200 Chinese low-cost mass produced mini-UUVs. So that equals 4,000 UUVs per flotilla.

These flotillas can be assisted by the fixed seabed and tethered anti-submarine sonar sensors China is already stringing across East Asian seas.

Such a flotilla can operate in entirely flexible reconfigurable ways, particularly to track very slow moving (when fully submerged) Australian conventional submarines (SSKs) eg. by being strung in front of, behind and even around an Australian SSK in a tightening sonar net.

The possibilities are endless, cheap and can occur in peacetime - no need for expensive naval assets.

They can "cue" naval assets to easily destroy our submarines, if and when conflict breaks out.

I think you have a good idea with how china could easily utilize their maritime militia to greatly, cheaply and with little training rapidly expand their coverage area if needed.

Using this concept of swarms with sonars/sensors to locate a sub i think a potential follow on solution would be that if a swarm detected something there should be a few in the swarm capable of quickly racing through the target area with the intent on impacting something and attaching/impregnating a device that pings/provides a firing target.

Here are further details of undersea swarms, being related here to mines, but can also relate to submarines.

Critical to [the USN's] ability to sense and deliver within [Mine Counter Measures (MCM)] operations and to “know” where mines are, will be large, distributed underwater wireless sensor networks (DUWSNs) that utilize novel acoustic underwater communication protocols.

DUWSNs, as envisioned, are self-organizing networks of mobile sensors that enhance sensing, monitoring, and surveillance capabilities. They form a mobile, dynamic observation system to enhance the ability to detect, classify, localize, and track events of interest to provide underwater sensing and surveillance capabilities that will lead to more precise knowledge about surface, subsurface, and underwater activities, particularly for the detection, classification, and location of mines and minefields.

DUWSNs are both mobile and dynamic (can adapt to changing conditions) in nature. In addition, they can monitor and detect time-varying events occurring within both their local and extended underwater environments. DUWSNs, when fully realized, will provide “perfect knowledge” about surface and subsurface activities and, hence, to the “all-knowing” capability that is necessary to provide revolutionary capabilities for MCM.

... In essence, the intent is for DUWSNs to be part of a much larger system-of-systems that includes unmanned underwater vehicles, components of subsea and undersea warfare, and littoral operations to enable pervasive and persistent ISR capabilities that will provide a major strategic, operational, and tactical advantage for MCM operations."

Pete mentioned in the above article the UK and Europe developing drone swarms for ASW.

The system was launched at the DSEI exhibition in London and can be deployed as a standalone asset or as part of a wider anti-submarine warfare (ASW) surveillance system.

KraitArray is a thin 20mm modular array that detects acoustic signatures from submarine contacts. Optimized for use with autonomous systems, the KraitArray consists of up to 150m sections that can be tailored to meet the objectives of a specific mission. When attached to DriX – an unmanned surface vessel with a wave-piercing hull that acts as a stable towing platform thanks to its outstanding seakeeping capabilities – the technologies offer a persistent autonomous anti-submarine surveillance system. Both technologies are proven in operation.

Steve Hill, Managing Director of SEA said: “We’re delighted to have partnered with iXblue to develop our latest sophisticated autonomous anti-submarine surveillance capability, SeaDrix. The integration of the two technologies results in a system that will allow naval forces to complete surveillance missions without the need to rely on military vessels and support teams being in the immediate area.”

As well as its long-endurance capabilities and rugged design, SeaDrix has a range of other powerful attributes. It is modular, coming with standalone mission planning, collision avoidance, sonar processing, and situation awareness systems, along with comprehensive communication (including long-range HF LPI) and the ability to operate with other SeaDrix or manned/unmanned systems.

It is also highly deployable. SeaDrix is 7.7m long x 3m high, meaning that it can be transported globally in an ISO container. It has its own deployment system (DDS) that can launch, recover and refuel SeaDrix at sea from a single point crane or davit either onboard or on a jetty. SeaDrix can self-deploy at up to 14 kts and multiple SeaDrix systems can be shipped globally to form a multi-static system as and where required.

Steve Hill added: “By providing customers the ability to ‘build their own system’, we are offering improved flexibility, an entry into ASW alongside the potential to grow the capability, and ease of use for navies, which are now tackling increasingly diverse threats in a range of scenarios.”

Guillaume Eudeline, Business Development Manager at iXblue, said: “This is an exciting development. Bringing safety and efficiency to the warfighter, the unique combination of SEA’s KraitArray and our autonomous surface vessel DriX brings a new, durable anti-submarine surveillance capability to naval forces around the world.”

SeaDrix combines SEA’s low-profile acoustic sensor, KraitArray, with iXblue’s unmanned surface vessel, DriX, to create a system that can operate in open ocean conditions and for up to ten days un-refueled or much longer with at-sea refueling system." ENDS

Note Sebastien Roblin's The National Interest article of November 9, 2019 "Will Drone Swarms Render the Submarine Obsolete? : And could China or Russia use them against the U.S. in a war?"
at https://nationalinterest.org/blog/buzz/will-drone-swarms-render-submarine-obsolete-95276

"...swarms of cheap drones both above and below the water (unmanned underwater vehicles, or UUVs) may pose the biggest and most proximate threat to submarines."

"...Submarines, larger UUVs, aircraft or warships could flood the ocean with hundreds of such cheap and expendable drone sensor platforms to form a long-endurance surveillance capability that could move based on new intelligence and changing operational requirements..."

and much more at https://nationalinterest.org/blog/buzz/will-drone-swarms-render-submarine-obsolete-95276

On the subject of Chinese "trawlers" all catching fish in China's near seas see "Why are "Chinese fishermen finding so many 'submarine spies'?" BBC News on 16 January 2020 https://www.bbc.com/news/world-asia-china-51130644 . This describes how Chinese "fisherman" are receiving large monetary rewards from the Chinese Government for catching US and East Asian UUVs in Chinese nets.

"...China has not revealed where the [UUVs] came from, merely saying they were "made in other countries". But regional expert and consultant Alexander Neill says they probably came from "the US Navy, the Japan Self-Defense Forces, or potentially Taiwan - this is a big area of rivalry".

"...China's fleet is different to other countries'. Some fishermen, themselves, are part of the military - and understanding how this unique unit works could explain why they keep finding military hardware.

The Chinese Maritime Militia [CMM] is part of the national militia - that is, the reserve civilian forces.

It is "virtually unique and publicly obscure", according to Professor Andrew S. Erickson from the US Naval War College - but it is well-known to the United States military.

According to a 2017 report by the US Department of Defense, the CMM has played "significant roles in a number of military campaigns and coercive incidents over the years".

In the past, the CMM rented vessels from companies or fishermen. But now, the DoD says, "it appears China is building a state-owned fishing fleet for its militia force".

"On paper they look like sophisticated, modern trawlers," he says. "But they are actually, essentially, military-type vessels - steel-hulled, not wooden-hulled, with increasing tonnage.

"If you look at photographs, it's clear they're networked in - because of their signalling capabilities - with the [regular navy] command and control network."

In effect, the fishing fleet can provide a low-level, first line of defence or surveillance - a military force working under a civilian cloak.

"A very significant swathe of China's fishing fleet is co-opted into the militia," says Mr Neill."

"...China doesn't just find underwater drones - it operates them, too.

At the military parade to mark the 70th anniversary of the People's Republic of China (PRC), the HSU001 was unveiled - a large UUV, possibly capable of launching smaller drones.

And five months earlier, another Chinese UUV was revealed in a less formal way, when Indonesian fishermen caught a "missile" with Chinese markings in the Riau Islands.

"It's not a missile, but a sea drone, which is usually used for underwater research," said police.

Although its origin was not confirmed, experts suspect it was part of China's vast sub-surface surveillance - the so-called "Great Underwater Wall of China".

So, as UUV technology develops, more fishermen - whether in China, Indonesia, or beyond - can expect to find more drones.

"They [drones] are extending the range of surveillance capacity for all of the modern navies in the region," says Mr Neill"