It being more than a week to April Fool’s Day the Russian Government still floated the possibility that  two mothballed Typhoon SSBNs might be converted into enormous SSGNs. As the particular Typhoons have been in corrosive seawater "storage" for 13 to 15 years - updating and modifying them might take more than 5 years and cost $Billions that the Russians do not have.

The Project 941 or Typhoon-class submarines had been withdrawn from service and kept at the dock of the Zvyozdochka Ship Repair Center in Severodvinsk [Russia’s Northern Fleet complex] slated for their subsequent disposal.

"The dimensions of these submarines allow arming each of them with at least 200 cruise missiles," he said.

“American Ohio-class submarines can carry 154 Tomahawk cruise missiles and Chinese Project 055 destroyer is capable of carrying 112 cruise missiles. But our frigates belonging to the Project 22350 can currently carry only 16 of them. Subsequent frigates will get 24 of them. It is still insufficient,” he added.

Russia has also begun developing a modernized frigate under Project 22350, that is capable of carrying 48 Kalibr cruise missiles.

"The Northern Design Bureau has completed designing frigates of Project 22350M capable of carrying up to 48 Kalibr cruise missiles,” TASS quoted a source from the design bureau as saying Sunday.

The longer range version could be in excess of 310 mile range which is the limit imposed under the Intermediate Nuclear Forces (INF) treaty.”

The Russian plan might be authentic and perhaps more importantly also hold propaganda value to exceed the cruise missile capacity of each US Ohio-class SSGN. The rather vague Russian comments are surprising as the two mothballed, by now very rusty, very old Typhoons (Arkhangelsk and Severstal) have sat in water virtually forgotten for over 13 years.

The major modifications of converting Typhoon SSBNs into SSGNs might be to:

-  treat and/or derust each Typhoon's massive steel outer hull and Titanium its multiple inner-pressure hulls. Russia may have lost the highly expensive industrial capability to work Titanium for submarines.

The cost of updating the 30+ year old Typhoon “Arkhangelsk” and Severstal” in question may be more expensive than building 2 new current/modified Russian Borei class SSGNs.

Russia already has Kilos, Oscars, Akulas and Yasens that can already fire Kalibr cruise missiles. Large Oscars (eg. the Project 949AM variant will (Starshiy advises) be able to vertically launch 64 Kalibr missiles as well as Oniks and Zircon. The first Oscar with this Kalibr capability is K-132 Irkutsk (which may come into service in 2021, followed by K-442 Chelyabinsk and K-456 Tver.

It will be interesting if this probable Russian propaganda further encourages those in the US who have been pushing for 4 or 5 additional future Columbia class subs to be SSGNs. 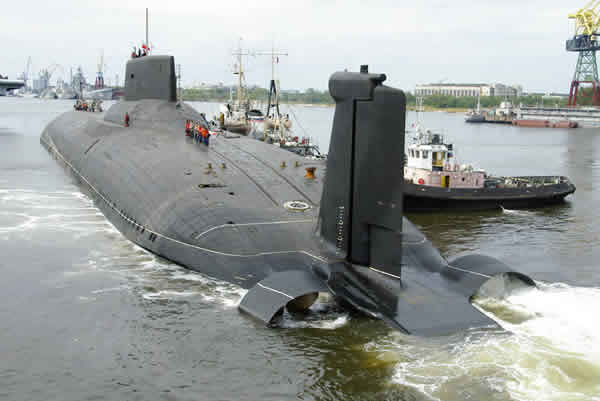 (Photo above) At 24,000 tonnes (surfaced) and 48,000 tonnes (submerged) the Soviet-Russian Project 941 Typhoons (photos above and below) are the largest and most expensive submarines ever built. Expensive in part because each uses 1,000s of tonnes of Titanium for its multiple pressure hulls. Titanium is hugely expensive to mine, process, work into sheets and to weld on a 1,000s tonnes scale. Like the Titanium pressured hulled Alfas the Typhoons have been dubbed "golden submarines". Their production did much to bankrupt the unbalanced Soviet economy by the late 1980s. 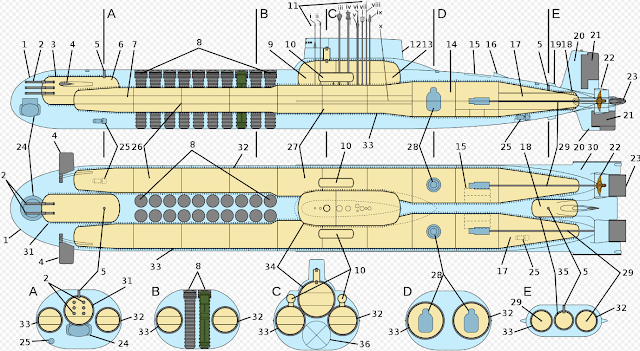 Diagram above indicates the Typhoon's intricate, multiple, Titanium pressure hulls. The diagram is on several sites including “Sebastien Roblin’s,   Russia's Typhoon Submarines are the Biggest Ever (Now Armed with 200 Cruise Missiles?)” The National Interest, March 30, 2019.

Hi pete,
Basically, the Russians are copying America in a way of having options to to strike at land targets without using Nukes.

I think you're right in the sense that the Russians are increasingly developing conventionally (Kilo) and nuclear propelled (Oscar, smaller Akula and Yasen) submarines armed with conventional warhead cruise missiles for Land Attack.

Long range cruise missiles are hardly cheap, that is why you see all these ships with mostly empty VLS. A Kalibr at ~$2-3M a piece, 200 pieces per Typhoon, that is >$500M doing nothing in peace time. Given Russia cannot even afford to develop AIP, I am guessing this is no more than vaporware and disinformation.
Besides SSBN traditionally try to stay far away from enemy waters where they can be somewhat protected. Even if a Kalibr can travel 2000-3000km, now these SSBN need to move out and into the killing zones of SSN or SSK to try to get much closer to their prospective targets.
KQN

That's a joke. As Pete underlined it, the cost will be so high that due to money shortage, they will be unable to arm others submarines.
Regards from Starshiy

Yes the cost of 200 x Kalibrs is likely too high for Russia. Only the US, with many times the defense budget can afford such numbers.

Indeed "vaporware and disinformation" with Putin/Russia claiming "we are still a military superpower, like the US."

Agree - If one assumes the main Russian Kalibr targets is the Middle East + Afghanistan then it would need to place these huge SSGN mode Typhoons relatively closer inshore than SLBM mode. So these Typhoons might sit in the closed waters of the Mediterranean, Red Seas or semi-closed Arabian Sea all with many undersea fixed and mobile (SSKs, SSNs and surface ships) sensors. Also putting the Typhhons in range of many ASW aircraft.

Yes I agree there is some logic of Russia rehabilitating some little used platforms (the 2 Typhhons) into large SSGN platforms, but PR value may be the main "logic".

In water submarines don't age well because of rust outside/inside hulls. They are also limited by preceding immersion-contraction cycles.

It will be interesting if this probable Russian propaganda further encourages those in the US who have been pushing for 4 or 5 Additional future Columbia class subs to be SSGNs.

The OScar II are not yet able to launch Kalibr. The first able to fire them will the K-132 Irkutsk, to day in Zvezda shipyard. She will be able to have 64 Kalbr at her maximum, or a mix of Kalibr, Oniks and Zyrcon.
Nowaday, she is planned to comme into service not before 2021, as 949AM class.
Two others are supposed to follw, K-442 Chelyabinsk and K456 Tver
Regards
Starshiy

Russia has added a new capability to their Project 885 Yasen SSGNs. Yasens are now
able to fire their Kalibr missiles while docked in port.

Sebastien Roblin https://nationalinterest.org/profile/sebastien-roblin has written another excellent article for The National Interest:

"Russia's Typhoon Submarines are the Biggest Ever (Now Armed with 200 Cruise Missiles?)" of March 30, 2019 at https://nationalinterest.org/blog/buzz/russias-typhoon-submarines-are-biggest-ever-now-armed-200-cruise-missiles-49727 siting my Typhoon article and questioning the viability of this Russian revamp intention.

Confirming Anonymous [at 29/3/19 1:01 PM] advice "Yasens are now able to fire their Kalibr missiles while docked in port."

"Russian sub launched cruise missile without leaving port"
[Russian Yasen-class multi-purpose submarine] "Severodvinsk" is Russia's most advanced submarine and is based less than 60 km from the border to Norway.

[small part] "The Russian Northern Fleet’s newest and most advanced multi-purpose submarine [the old multi-purpose are the Oscars], the “Severodvinsk”, has fired a Kalibr cruise missile without leaving the pier, Izvestia reports.

It is said to be the first time a nuclear-powered submarine has launched a cruise missile directly from the base, a move drastically shortening the time it takes to make a submarine’s weapons ready for combat. During Cold War times, Soviet ballistic missile submarines were ready to launch intercontinental nuclear weapons while moored, but according to Izvestia, this hasn’t previously been the case with multi-purpose submarines.

The submarine-launched version of Kalibr cruise missile has a range of up to 660 km."

The 660 km range seems far less than submarine launched 1,000+ km Tomahawks. But the main tradeoff is Kalibrs can have a solid rocket booster End Run of Mach 2.9 while Tomahawks can only maintain a jet propelled Mach 0.74.

Sebastien Roblin has published another fine article at The National Interest:

"Russia Wants to Take Its Monster Typhoon-Class Subs and Make them Missile Carriers" of April 22, 2019 https://nationalinterest.org/blog/buzz/russia-wants-take-its-monster-typhoon-class-subs-and-make-them-missile-carriers-53662

on the problems and costs of revamping old Typhoons to handle cruise missiles.