Following Submarine Matters' German vs Swedish Advanced AIP for Submarine Sales to Poland, the Netherlands and India of September 16, 2019, Anonymous has kindly provided the following comments on the Type 212CD under development for the German and Norwegian navies.

Information on the Type 212CD (Common Design) is limited. The 212CD:

i) is a Norwegian-German TKMS joint development with Norway purchasing 4 and Germany 2. Deliveries are expected in 2016 [1]. The 212CD are based on the Types 212A and 214

iii) will have extended range, speed and endurance(6 to 8 weeks) [2] [3, 4]. Hence it will use two MTU 12V 4000s because just one diesel (used in the 212A) is not suitable or safe for long range operation. To accommodate the two MTU diesels the beam/diameter has been enlarged to 8m. This is an increase from the 212A 6m beam useed for just one MTU 396 diesel

iv) use of SAFT made lithium iron phosphate batteries (LFP) is likely [source?]. This is more stable [than other LIBs and/or more stable than LABs?] at the low Baltic and North Sea, North Atlantic and Arctic Ocean temperatures the 212CD will operate in.

v) The latest Permasyn magnetic propulsion motor will be used.

vi) As with the 212A and 214 for safety the AIP oxygen tanks and hydrogen cylinders are outside the pressure hull and inside the light outer hull. The 212CD will use fourth generation fuel cell (FC4G) AIP

vii) Italy, the Netherlands [1] and Poland could buy into the 212CD program (does it satisfy their requirements?) [5]. But, published data on 212A and 214 may provide some important information on 212CD [6].

“The Type 212CD followed the [curtailed Type 212NG (Next Generation) program], a design by tkMS for the German Navy. In turn, the NG was derived from the Type 212A and the Type 214. When Norway joined the programme, the requirements were merged into a new design: Type 212 Common Design. Not much has been disclosed about these submarines, except that their displacement is 2400 tons and their hulls are made of amagnetic steel.”

[2] “German-Norwegian Type 212 CD submarine contract to be signed early 2020”, NAVAL TODAY. COM, Jun/014/2019, https://navaltoday.com/2019/06/14/german-norwegian-type-212-cd-submarine-contract-to-be-signed-early-2020/
“The new Type 212 CD submarines will share the low signatures of the Type 212 boats in service with the navies of Germany and Italy but will have extended range, speed and endurance to allow worldwide operations, according to TKMS.”

[3] “U 212 CD, the next Norwegian submarine, but what for? (1/2)” , DefenceChronicles, https://www.defencechronicles.eu/u-212-cd-the-next-norwegian-submarine-but-what-for/
“Of course, in terms of the RNN submarines’ capabilities, the Norwegian Sea surveillance mission is very demanding since they must keep submerged almost permanently in sectors of the North Norwegian Sea or along some fjords. This requires endurance at sea (6 to 8 weeks), keeping watch in a patrol area between two long dived snorkeling transits on the way out of the home base and on the way back.”

[4] “U 212 CD, the next Norwegian submarine, but what for? (2/2)” https://www.defencechronicles.eu/u-212-cd-the-next-norwegian-submarine-but-what-for-22/
“By selecting the U 212 German class, the Norwegian MOD made certainly the best choice of a coast guard submarine, while objectively giving up the ambition to extend its Navy control to the open Norwegian Sea and play a combined role with other friendly ocean going submariners, in the hunt for the new “Red Octobers”. Also see Table.

[5] “German, Norwegian officials huddle over joint submarine program” https://www.defensenews.com/global/europe/2019/04/30/german-norwegian-officials-huddle-over-joint-submarine-program/
“The design of the new boats has yet to be locked down, which may reflect a last glimmer of hope in Berlin and Oslo that other countries in the market for submarines — namely Italy, the Netherlands or Poland - could join the effort.”

[6] The TYPE 212A is a small and stealthy submarine design. Both oxygen tanks and hydrogen cylinders are stowed outside of the pressure hull on [safety grounds]. In line with the stealth, extensive use is made of non-magnetic steel, supplemented by lightweight [graphite fiber reinforced plastic] GFRP for hull outer coverings and the fin. TYPE 214 is described as an evolution of the TYPE 209 with the addition of a number of innovations found in [later model 209s]. 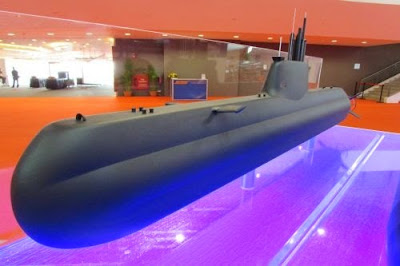 Pete Comment: I estimate "2,400 tons" displacement for the 212CD for the Norwegian and German navies to be too high for the shallow Baltic. Perhaps 2,200 tonnes submerged may be more accurate. This is similar to TKMS latest launched 2 or 3 diesel Singaporean Invincible (was 218) class. The Invincible/218 for the shallow Malacca and Singapore Straits is estimated at 2,000 tonnes (surfaced), 2,200 tonnes (submerged). The 212CD is likely to have X-plane rudders (below) like the 212A and Invincible class. The the photos of Invincible/218 model above and below may be most like the future Type 212CD. 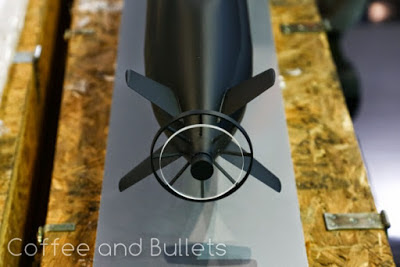 Anonymous (with some editing and comments by Pete)
Posted by Pete

Type 212A, the Baltic Sea specific submarine features small and non-magnetic with one diesel and twelve torpedoes. In a viewpoint of business [2], Type 212CD will be larger than Type 212A to equip two diesels and more torpedoes.

[1] https://en.wikipedia.org/wiki/Type_209_submarine#cite_note-directorysub-8
[2] German Navy is said to purchase two Type 212CDs until 2026. But, six Type 212As of German Navy are half-dysfunctional because of budget and crew shortages. In such a situation, does German taxpayer admit purchasing of additional two submarines? If possibility of submarine purchasing by German Navy is very low, its requirements (Baltic specificities) will be neglected in design of Type 212CD.

As diesels should be maintained under the mission for oceanic submarine, enough space for diesel section is needed. The space of diesel section for Warlus submarine, which equips three diesels inside of double hull structure, is extremely tight [1], therefore, this space must be improved for next Netherlands submarine.

Case 1: oxygen tanks and metal hydride cylinders outside of pressure hulls (212A style).
Outer diameter of diesel section should be at least 1m wider [2-4]. This means beam of 212CD is 7.8m (=6.8m+1m). In this case, maintainability of diesel is not as good as case 2 (is still better than Warlus?), but, higher safety.

[4] https://ameblo.jp/calorstars/entry-12157790493.html
Pictures of installation of diesels in Hyundai made Type 214 submarine. These pictures show tightness of diesel section.

[5] Distance between diesel-diesel for Japanese submarine whose diesels are maintained under the submarine mission seems to be more than 40cm wider.

Your comment is worthy of an article, which I will publish soon).

Hi Pete
Looks like the Philippines have Submarine Ambitions on their minds and they think they can cut a deal with France on the Scorpene class SSK.

Philippine Navy eyes to have first submarines by 2027
https://newsinfo.inquirer.net/1168447/philippine-navy-eyes-to-have-first-submarines-by-2027

Double hull structure consisted of outer light hull (outer diameter of 9.1m) and inner pressure hull (outer diameter of ca. 7.2m?) is adopted for diesel section of Oyashio-class (also Soryu class), where two diesels (KAWASAKI 12V25/25) with 12 square-shaped cylinder head covers across the passage are installed. As bore of 12V/25/25 is 250mm, width of the passage estimated ca.1.2 m which is considerably bigger than those of Type 214 [2] or Warlus [1]. Bigger space of diesel section facilitates maintenance of diesels during the mission period (such as 10weeks) for an oceanic submarine.

The Philippines with its healthy economic growth is now buying new surface ships and patrol boats rather than relying on 40-50yo US Coastguard cutter handmedowns.

The Philippines may have sent some future submariners to France for training. But I would not be surprised if the Philippines still tries to play off France's Naval Group against South Korea's DSME to deliver the cheapest subs with the largest commissions for Filipino officials and poliliticians. Maybe Russia's Kilos are still an outside contender.

I'll add them into the SubMatts article set for tomorrow.

South Korea provided soft loans for Philippines infrastructure in 2018 http://overseas.mofa.go.kr/ph-en/brd/m_3284/view.do?seq=759480 maybe its been extended to this SK built frigate exports to the Phils https://en.wikipedia.org/wiki/Jose_Rizal-class_frigate maybe to Chang Bogo exports in future.

If the Russians have the money and want some strategic leverage over the Phils then soft loans for Kilos - maybe.

BUT the main thing Philippine officials and politicians may be looking for are healthy commissions (some call it bribes - "Mr 10%") for acting as middlemen in any submarine deal.

Talking of "commissions" aka "bribes" to win a submarine contract, check out
https://www.irishtimes.com/news/world/europe/a-murky-tale-of-arms-sales-and-kickbacks-reaches-court-in-paris-1.4041899 of 6/7 October 2019 :

[French] "Commissions on the sales of three Agosta class submarines to Pakistan and four Sawari II frigates to Saudi Arabia came to a staggering €327 million. François Léotard, who was [French] defence minister at the time, argues that the commissions were “decisive” in sealing the contracts."

"The commissions – essentially bribes to Pakistani and Saudi officials – were written off as “exceptional commercial expenses” and were arguably not illegal at the time. The middlemen in the K network, Takieddine, Ali Ben Moussalem and Abdul Rahman Al-Assir, received €33 million.""

In Australia there appears to be no discernable tradition of "commissions" to win arms contracts, rather former senior (officers, politicians and officials) are possibly offered well-paying jobs.

HDW Class 212CD E(Expeditionary) (https://www.youtube.com/watch?v=7uPe_s0Dfng):
Oxygen tanks are installed inside of the pressure hull, and two or three diesels are installed.

Germany Navy insisted minimal size of submarine as a best choice and deployed 214A, but, it is going to buy two bigger 212CDs. Does Germany Navy suffer from schizophrenia?