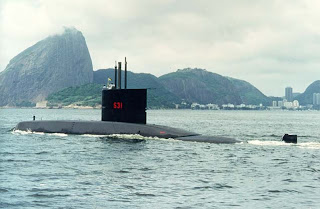 An HDW 209 Type 1400 (this particular sub, S31, is Tamoio part of Brazil's Tupi Class) in what looks like "Sepetiba" Rio de Janeiro's harbour. Indonesia's three new submarines will be similar.
- 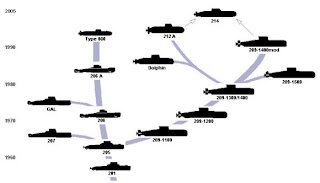 The Indonesian Defence Ministry and Daewoo Shipbuilding Marine Engineering (DSME) signed the contract on Tuesday December 20, 2011 for South Korea to build three submarines for the Indonesian Navy. Delivery may be in 2015-2016 with commissioning by 2018. These submarines are South Korean Improved Chang Bogo Class derivatives of the German designed HDW 209. It is inevitable that incorporated into these two submarines is technology developed for the HDW 214. HDW 214s are HDW's main current submarine for export.

Under the contract, the two submarines built in South Korea will be in cooperation with Indonesian state-owned shipbuilder PT PAL.

Ministry spokesman Brig. Gen. Hartin Asrind told the Jakarta Post over the phone that the contract was worth US$1.07 billion.

Indonesia’s signing of a contract to procure three submarines from a South Korean company is an effort to keep pace with other countries in the region such as Malaysia, Singapore, Vietnam and Australia.

The Improved Chang Bogo Class will weigh approximately 1,400 tons surfaced and 1,600 tons submerged, be 61.3 meters long, will carry up to 40 crew members and have eight weapons tubes for 14 torpedoes, mines, missiles (US Harpoon and/or Indian BrahMos?) and other weaponry.

Other Submarine Forces (and Acquisitions) in Indonesia's Region