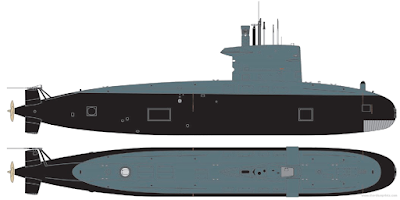 The Walrus class hull above (diagram from Blueprints) may be only slightly modified for a replacement submarine. If there is some Swedish design influence in the replacement might it look more in the direction of the Collins (below)(diagram courtesy The Lead South Australia)? 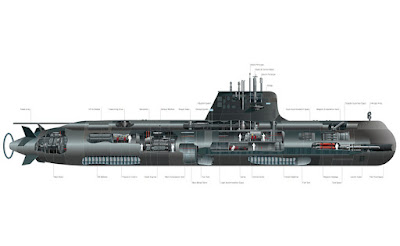 The two sources used below are:

The Dutch Defence Ministry in 2015 indicated the possibility of spending Euro 2.5 billion or more likely 4 billion all up on four new submarines. A Euro is currently about US$1.05. The Dutch Parliament needs to approve the budget.

-  Germany by TKMS-HDW. Although TKMS builds far smaller subs, and/or

-  in Sweden, with some Australian assistance? “In fact, there are only two parties with
experience: Kockums of Sweden and Australian Submarine Corporation. Together they were
involved in the construction of the Australian Collins-class, based on a 471-Kockums design.”

Some degree of joint venture is possible between Dutch shipbuilder Damen with Saab Kockums, TKMS, Norwegian and Canadian companies. Damen as a buyer and/or part builder may be able to partly contribute to submarine sales to Asia.

The “Golden Triangle” refer to collaboration between the government (including the Dutch navy) with industry and knowledge institutes (eg. universities and engineering bureaus).

The Dutch Parliament should make “a final decision in 2018” on the expensive future submarine purchase.

- Broadly the same hull as the Walrus class; with buoyancy characteristics flexible enough to
operate in such different salt-temperature environments as the Baltic Sea and Red Sea.

- Ample space for special forces with their equipment;

- A means/weapon for warning shots (torpedos not useful, of course);

- SLCMs against ships and land (not Tomahawk or other long distance SLCM);

- Internet [or more broadly communications?] above and below water;

- A real galley space and no food fit only for microwave ovens;

- Technology should be compatible with the above-water ships;

Further requirements of the Dutch Ministry of Defence for 4 replacement submarines include:

- “Max Displacement” (so assumed to be Submerged) about "3,000 tons" hence Australia's experience with the just over 3,000 tons Collins is relevant.

- Optronic masts and other advanced sensors. 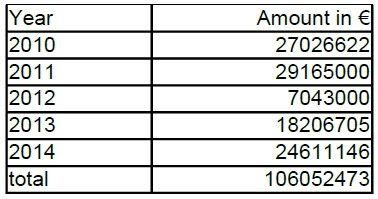 A final point. The Netherlands still assists Taiwan in upgrades and maintenance for Taiwan's two Dutch built Hai Lung class submarines. Above are amounts in Euros the Netherlands charged for these services. These total 106 million Euros over 5 years (2010-2014). What would China think?
---

The 'golden triangle' whits the navy is referring to is the collaboration between the government, industry and knowledge institutes like universities and engineering bureau`s.

The Netherlands has a culture of negotiations, making compromises and pulling people from different sectors together. We call this 'polderen' to make sure the best possible outcome for all parties will be obtained.

The 'golden triangle' is the navys exempel of 'polderen'

Design and production periods of new submarine are 3 and 5-6 years, respectively. Appication of LIBs is temporally difficult for commission in 2025. A new Dutch submarine will equip with AIP and LABs.

Dimensinon of submarine can be estimated fron L/D ratio (L=length of hull, D=diameter of hull). Optimum L/D is 7, and larger L/D (such as > 9) for actual submarine is expected due to practical requirement. For 3000t cigar type submarine of L/D=9, beam and lengh may be 8m and 72m, respectively. For L/D=8, D=8.5m and L=68m.

Thanks for the explanation.

I cant see the naval need for a long transit just to reach the Caribbean. These are holiday islands not vital political interests. In any case there is a mix of US, UK and French islands, so any invasions will stand on much bigger countries toes.
Curaçao the largest island and and its close neieghbour Aruba are a self governing countries within the Kingdom , its practically undefendable by submarines with the very shallow surrounding waters
The netherlands submarines would likely only be required as a component of Nato.
Curacao's problems are one that Australia could understand, refugees arriving on boats.
panampost.com/nelson-albino/2016/05/11/as-venezuelan-crisis-deepens-curacao-prepares-for-refugees/

Yes the ability of countries in the early 2020s to thoroughly assess Japanese LIB performance would be limited.

I don't know if the same long transit reasons that prevented fitting AIP to the Walruses would also prevent AIP in the Walrus replacements.

The teardrop hull shape of the Walruses may indeed by modernised to cigar type.

Facts over assumptions when an informed Kev accesses Dutch naval circles. The Dutch may only occasionally need to monitor and deter aggression to their Caribbean possessions and possibly drop off special forces. But the Dutch Navy appears to require the capabilities.

The Dutch pattern of building large, 10,000nmi range, Walrus [1] and before that the large sized Zwaadvis class [2], belong to requirements better known to Dutch who talk to the upper ranks of their navy [3].

Dutch subs also monitor the venezuelan navy and do intelligence work in the region for the US for the war on drugs.

Curaçao, Aruba and Bonaire are one of the closest islands to Venezuela and thus for easy targets for Venezuela. Make no mistake a Dutch sub or a frigate can hold his own against the the venezuelan navy (there are not so good).

The Dutch Caribbean are not only holiday islands, they have also oil and are still trading centers in the region. Curaçao and Aruba are self governing countries within the Kingdom but they are still citizens of the kingdom and have protection of The (European) Netherlands.

Australia may send a copy of the Coales Report and a book about steel, spies and spin.
Wrapped up together in paper with a notice attached: don't do it this way.

Israel's state attorney has ordered the opening of a criminal investigation into subamarine deals with TKMS [1]. I remember defeat of Japan in CEP by lack of enthusiasm [2]. Dutch government should evaluate not quality of submarine but also quality of enthusiasm.

I criticized unfair business. But, I do not intend to criticize unrelated people at all. I highly appreciate German technology such as FC and people’s dedication to develop technology. Such a scandal hurts engineers and labors who are very proud of their works.

For sure Germany bribed Israel.
Germany paid one third of the submarine's price.

I introduce very interesting pictures of TYPE214 [1] from open source. There is a little space between diesele and hull (2 picures, bottom), as a resul, maintainability of diesels is too bad. I believe Dutch Navy will adopt wider beam (+ca. 2m) to allow maintence work in space between diesel and hull.

TKMS indeed may be making larger subs (like the 3,000 ton Dolphin 3? or 3,000 ton South Korean design?) in part to improve maintenance.