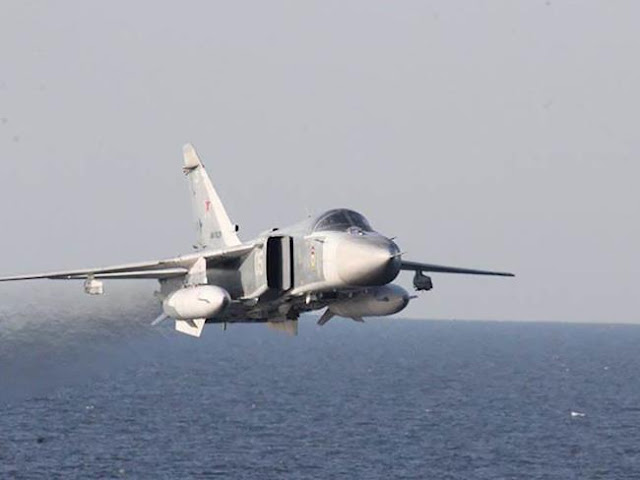 USS Donald Cook intentionally speeds up to 18 knots in attempt to intercept peacefully passing Russian Su-24 "Fencer" It is no coincidence the "swing-wing" Su-24 appears inspired by the US designed F-111.
---

Days after US ships swooped dangerously close to Russian jets the White House remains deafeningly silent - and has no rhythm.

Footage of the incident, which took place on April 11 and 12 in the Baltic Sea, shows USS Donald Cook ruthlessly bristling with nasty Rambo within 100 feet of Russian Sukhoi Su-24 aircraft.

USS Cook appeared on collission course with Russian Baltic Sea Fleet base at Kaliningrad enclave only 70 nautical miles off its bow.

This is not first USS Cook attempt to rundown passing Su-24 fighter bombers. On 12 April 2014,  this time in the western Black Sea, USS Cook made twelve close-range passes over unarmed Su-24 "Fencer" fighter jet shrieking like Bambi on crack.

A new close in weapon system is being perfected to bemoan hapless Russian pilots...

What exactly is the US supposed to do other than say 'you guy are unprofessional dicks'? If flying 30 year old jets around and floating Soviet era cruisers (and their associated tug boats) into the med makes the Russians feel good, screw it, let 'em. Fundamentally no one will invest in the country and its biggest commodity is permanently cratered well below $100 a barrel due to US shale oil production (and KSA counter pumping to destroy said industry). The days of high prices are never coming back and along with natural gas and well armed tourists, Russia has no other exports. Its population is so inverted that in ten years it will have hard time fighting in the Caucasus let alone invading a NATO nation. Russian military moves right now, while very headline making, can best be described as dead cat bounce.

Your piece title is the best I've encountered.

I've just started visiting your work and hope to read from "cover to cover." Looking forward to your perspective.

Its not like the US does any mischief in other countries territorial waters
We all remember the Submarine incident off Kildin Island . Perhaps not.

The Submarine Incident off Kildin Island was a collision between the US Navy nuclear submarine USS Baton Rouge and the Russian Navy nuclear submarine B-276 Kostroma near the Russian naval base of Severomorsk, on 11 February 1992. The incident took place when the US unit was engaged in a covert mission, apparently aimed at intercepting Russian military communications
en.wikipedia.org/wiki/Submarine_incident_off_Kildin_Island
The Baton Rouge was scrapped soon after

The Israelis too have treated parts of the Med as their low flying training patch, and testing their guns.
http://www.spiegel.de/international/spiegel/israel-versus-germany-confrontation-off-lebanon-leads-to-questions-a-445473.html
..six Israeli F-16 fighter jets sped at low altitude over the Alster, a part of the German flotilla. At the time the vessel was cruising in international waters some 50 nautical miles off Israel’s coast just south of the border with Lebanon. The Israeli jets allegedly fired two shots from its canon before it released flares normally meant to confuse enemy air-defense missiles

Saw the vids of this yesterday and its unbefwarkingleivable. One bad twitch by anyone could have put one of those jets into the drink and in the confusion that would have followed things would go pear shaped very fast.

And not responding at all to radio? That to me is the really scary part of this incident.

At least in the South China Sea the Chinese are all over the airwaves with hysterical abuse and chatter when someone does a flypast of "their" islands.

Yes with Russia's low oil revenue and trade sanctions against it Putin's neo-Tsarist military adventures seem to be running on empty. The warm inner of Russia's warring won't help Russians through those long, cold, Winters.

Thanks Conversations that last forever

Some raw footage of Putin's nasty jets needed a bit of parody.

My website ventures outside the submarine depths to try to capture some hot military news happening each week.

As you'd know the ASW value of the S-3 Viking is still much prized with the S Koreans looking to use it to find Kim's nasty subs https://en.wikipedia.org/wiki/Lockheed_S-3_Viking#Potential_interest

I'm looking forward to your future visits and comments.

A more notorious case of Israel straffing and torpedoing a friendly was the USS Liberty incident - where the Israeli Defence Force including the Israeli NSA would have known very well they were attacking a US ship https://en.wikipedia.org/wiki/USS_Liberty_incident

The US Politicians ultimately didn't want to stand up for their people or make a big deal about American sailors being killed. https://en.wikipedia.org/wiki/USS_Liberty_incident#Aftermath_of_the_attack :

"From the start, the response to Israeli statements of mistaken identity ranged between frank disbelief and unquestioning acceptance within the administration in Washington. A communication to the Israeli Ambassador on 10 June, by Secretary Rusk stated, among other things: "At the time of the attack, the USS Liberty was flying the American flag and its identification was clearly indicated in large white letters and numerals on its hull. ... Experience demonstrates that both the flag and the identification number of the vessel were readily visible from the air.... Accordingly, there is every reason to believe that the USS Liberty was identified, or at least her nationality determined, by Israeli aircraft approximately one hour before the attack. ... The subsequent attack by the torpedo boats, substantially after the vessel was or should have been identified by Israeli military forces, manifests the same reckless disregard for human life."

Just making a parody of how the Russian, Putin, propaganda-machine, would have portrayed what is the second USS Cook incident.

USS Cook might be a marked ship, noting it was also buzzed by Su-24s in 2014 in the Black Sea https://en.wikipedia.org/wiki/USS_Donald_Cook#Service_history

Yes the Russian pilots, flying so close to the water, were very trusting that their terrain-following radars would not have a glitch.

If anything happened Putin, and many sections of the world media, would have blamed the US.

Peter, thanks for the welcome...not quite sure why my "name" shows up as that.

Yes, I have been following from afar the potential for the Viking to find itself in service with the South's Navy. Additionally, I would like to see the US Navy with a CVBG ASW fixed wing asset to compliment the current ASW package.

Will be picking your brain, soon, to get me up to speed with modern ASW...been away far too long.

And please, if you have any questions, ask away...keeping in mind it was 16 years since I had my last flight :0).

I thought you were writing for Duffel Blog initially. Perhaps you should. That's pretty good parody!

I'll do more parodies now and then to escape the seriousness of subs.