The Indonesian Navy's suspicion that KRI Nanggala's sinking was caused by a natural occurrence, an "internal solitary wave" [aka internal wave] appears adequate given that  Navy's concerns.

"The submarine's former commander, Rear Admiral Muhammad Ali, has told local media that a so-called internal solitary wave could have been to blame. The natural phenomenon occurs when different sea depths come together, creating forces that could have dragged the vessel down, he said."

So simply no need to investigate or blame:

-  a equipment failure brought on by a command decision to send to sea an overly
old submarine (with unreliable electrics? maybe with pressure hull metal fatigue?). 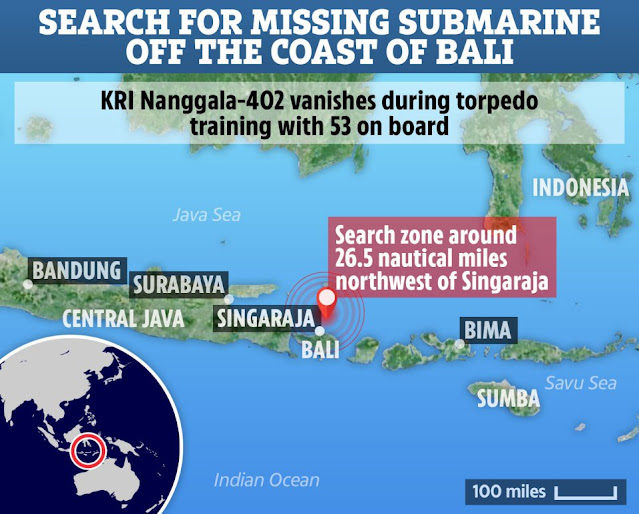 KRI Nanggala was training in familiar waters not far from its Surabaya Home Naval Base see “KRI Nanggala-402 at their [TNI-AL 2nd Fleet/Eastern Fleet Command] base in Surabaya, East Java”. It could be the officer/crewman in charge of constant buoyancy corrections, in response to changing sea conditions (like internal waves) may have not have been as efficient or aware of local sea conditions as normally expected. ie: human error?

An internal wave sink rate of 10m/minute does not sound fatal for an efficient submarine crew response.

Also a submarine commander might be expected to avoid sea areas/conditions known to build up to such waves.

"As a submarine is nearly neutrally buoyant, its total average density is about 1 gm/cm. The buoyant force (positive or negative) exerted on a vessel as a result of a 5 [degree] C temperature change would thus be about 1 dyne/cm, giving the vessel an acceleration of approximately 1 cm/sec, neglecting drag. A submarine under way could easily correct for the effect; however, this slight acceleration could cause serious problems for a submarine without power [as the Indonesian Navy theorised about Nanggala. Still it would be a command error to send such an old submarine, with old unreliable electrics, to sea.] [or] hovering, or moving at very slow speeds.

Under these conditions it would not be possible to trim the vessel by the diving planes alone. It would be necessary to blow ballast, a difficult process during power failure and undesirable during quiet running. If the vessel were more compressible than sea water, the acceleration would be accentuated as the vessel's density responded to changes in hydrostatic pressure. Vertical displacement could thus reach serious proportions unless promptly controlled. As the vessel reached thermal equilibrium with its new environment, its buoyancy would change in the direction tending to restore the original position and would thus have a damping effect on the influence of the internal wave.

The other possibility is that the submarine might be caught in a strong vertical current. If this current were caused by an underwater disturbance such as an explosion, landslide, or volcanic activity, it might be expected to reach serious proportions. It is also known that unusual internal wave phenomena occur at the edges of strong currents such as the Gulf Stream and Kuroshio and also in certain straits such as Gibraltar and Malacca. However, an ordinary internal wave moves at such a slow speed and has such a large ratio of wavelength to amplitude that the vertical motion of any region of water within the wave is of extremely low velocity; it would be well within the capability of a submarine commander to correct for any depth change caused by this slight motion. Again, it would be necessary to compensate for any buoyancy change brought about by changes in position and pressure.”

An excellent commentary carried by the Lowy Interpreter May 11, 2021 https://www.lowyinstitute.org/the-interpreter/biden-s-north-korea-review-diplomatic-victory-moon-jae

"South Korea’s president has won the new administration in Washington over to his way of thinking."

"
US President Joe Biden will later this month hold his first face-to-face meeting as president with his South Korean counterpart, President Moon Jae-in. In the lead-up to the 21 May meeting, the United States has announced the preliminary results of its North Korea policy review. Although lacking in specifics, the review made clear the Biden administration would commit to “a more calibrated, practical, measured approach” towards North Korea, one that seeks progress towards denuclearisation through diplomacy. Gone are the days of “fire and fury” or even the more gently named “strategic patience”.

So far, the Biden administration has walked the talk. Washington has reached out to North Korea twice since mid-February in a bid to jump-start talks, which had been dormant since 2019 meetings in Stockholm. The US also considered the policy review to be a small olive branch, and whether diplomacy goes forward would depend on North Korea’s willingness to accept the offer.

North Korea did respond, with the usual bluster. Still, experts saw Pyongyang’s language as soft and with enough space for talks to resume, should the North change its mind.

And all this means Moon emerges as the winner from the preliminary policy review.

If North Korea does not carry out any major provocations and Biden commits to diplomacy, a conservative successor to Moon will be less likely to kill détente.

Ever since Biden assumed the presidency in January, the Moon administration has gone to great lengths to lock Washington into Seoul’s policy of engagement. Revitalising inter-Korean and US–North Korea diplomacy was among the priorities on the agenda for South Korea when US Secretary of State Antony Blinken and Secretary of Defense Lloyd Austin visited Seoul in March, as it was when US, Japanese and South Korean national security advisors met in April."

A video summarizing submarine accidents from 2000.

A generalisation from the Youtube is the most accident prone navy is Russia's and most of those accidents tend to be more deadly - expecially all 118 killed in the Kursk disaster https://en.wikipedia.org/wiki/Kursk_submarine_disaster

China clearly underreports its accidents given its large and less develped, ongoing experimental, submarine fleet eg. nothing about reactor problems. This is even though the first SSN class, Type 091s, had a poorly shielded reactors that would have shortened the lives of many crew and caused birth defects. The only reported Chinese sub accident is that of all killed in Ming class SSK No. 361 - see https://en.wikipedia.org/wiki/Chinese_submarine_361#Fatal_incident

According to an ex-commander of the sub, that sub has actually descended at a rate of 9 m/s during a black out. When looking at the roster, can't say the whole crew is experienced. That whole minute till crush depth was probably not enough.

Since command actually went down with the boat, don't expect any names. Though hopefully the audit will find and correct something. We've operated older boats with less maintenance without a major incident like this. Something went wrong and it's hard to believe it's just down to luck. Will be interesting to see what happens to Cakra when it gets out of dry dock.

In the article the current Commander of Indonesia's Naval Staff and Command School (Seskoal) Rear Admiral Iwan Isnurwanto, said that many years ago - as a crewman on KRI Nanggal, he had experienced an earlier electrical blackout emergency. In that event (years ago) Nanggal was unable to adjust buoyancy with electrical equiment UNTIL:

"The problem was finally resolved [by] the head of the engine room (KKM), who [manualy? blew] the main ballast tank and pressure-resistant tank so that the submarine moved up [eventually resurfacing]. "

I will also turn this into an article later this week.

SubMatt's (mainly aimed at Aus, US, Singaporean readers) aims to do an article on Tues 8 June on Indonesia's poor naval maintenance decisions leading to Nanggala's sinking.

This will include the Indonesian language article that you located:

"KONTAN.CO.ID - JAKARTA . The Commander of the Naval Command and Staff School (Seskoal) Rear Admiral Iwan Isnurwanto said that he had experienced a blackout situation when he was a crew member of the submarine KRI Nanggala-402.

"When I was crewing Nanggala, I also experienced something similar called a blackout," said Iwan at a press conference, Tuesday (27/4/2021).

Iwan said, the blackout situation occurred in the middle of the night when he was resting on the bunk bed. Iwan, who was on the third-floor bed, immediately jumped because the ship began to tilt and 'slump' in a short time.

"The position is that the rear one immediately drops to 45 degrees (slope) or more, immediately (down) like this, not up to 10 seconds (down) to 90 meters," said Iwan.

The conditions inside the ship were dark and the emergency lights were still on. Iwan said that at that time the ship's commander ordered the crew to move towards the bow of the ship or the front of the ship by crawling because the ship had tilted 45 degrees.

"So we crawled through the hallway, I'm sorry, I got goosebumps all because I've experienced it, crawling holding the doors all the way to the front," said Iwan.

The problem was finally resolved after the head of the engine room (KKM) who was then in charge of blowing the main ballast tank and pressure-resistant tank so that the submarine moved up.

Iwan said that the submarine had a blackout at that time because one of the fuses was blown. "What's the problem? One fuse has blown, even though we don't know where the fuse is.

But because of the sophistication of the KKM at that time, it was immediately known that it could be repaired. Thank God at that time," said Iwan.

Until now, the SAR team is still trying to lift the wreck to the surface. The plan is that 53 bodies of personnel from KRI Nanggala-402 will be evacuated to Surabaya, East Java."

SubMatts. in its June 8, 2021 article, will also include Reuter's article "Salvage of Indonesian submarine ends as questions over military hardware loom"

TEXT: "The tragedy has highlighted fears about the condition of Indonesia's military hardware, with several senior submariners suggesting the vessel, the KRI Nanggala-402, had not been optimally maintained.

Before it sank, the submarine's commander, Lieutenant Colonel Heri Oktavian, had complained to a friend, journalist and military analyst Edna Caroline Pattisina, about the delay of an overhaul scheduled in 2020, she told Reuters.

The vessel was last overhauled in South Korea in 2012, she added.

Speaking on condition of anonymity, a senior Indonesian submariner told Reuters the overhaul by state-owned ship builder PT PAL had been delayed because of the coronavirus pandemic.

Two Indonesian submariners, who asked not to be identified because the issue is sensitive, also recalled a string of maritime mishaps on the Nanggala, including one in 2017, when the submarine unexpectedly dropped 84 meters (276 ft) in the waters of North Bali after water entered the snorkel tube.

A similar incident in 2014 saw the Nanggala drop 17 meters (56 ft) in West Bali because of the same problem, another submariner said.

"When that submarine fell, that was not an ordinary event, we can say it was an emergency situation," he added. "We needed a quick reaction to solve it."

Achmad Taufiqoerrochman, a former navy deputy chief of staff, recalled that the Nanggala had suffered a connection problem with its torpedo tubes in 2016, but added that the issue was later resolved.

Navy spokesman Julius Widjojono said he had never heard of the incidents.

But security analyst Natalie Sambhi, the executive director of military research group Verve Research, said it was not the first time Indonesia's military weaknesses had been exposed.

Indonesia had suffered three C-130 aircraft disasters since 2009, she added.

"That's important, to think about the overall state of their military technology and how it is being maintained," Sambhi said."