As usual I peruse Beijing’s Chinese language SINA News Agency website for submarine articles. I have translated the article below into better military technical English to give it a wider audience outside China.

The outside world believes that the domestic “new generation of giant wave submarine missiles [JL-3  SLBMs (Chinese: 巨浪-3; pinyin: Jù Làng Sān; literally: “Giant Wave 3”] may be equivalent or similar to the French M51 SLBM.
On May 11, 2020 at the State-owned Assets Supervision and Administration Commission of the State Council (SASAC) announced the Selection of the Second National Innovation Competition Award for the underwater solid fuel launch vehicle development team. The outside world believes that this move indicates that the new JL-3 has been successfully developed, and "we have added a sharp sword".
As is widely known the first-generation domestic JL-1 submarine missile was tested in the 1980s, and the second-generation JL-2 submarine missile was first tested at the early 2000s. The JL-1 is nearly 40 years away, and JL-2 is close to 20 years. Obviously, these older JLs would not have been selected for the national innovation competition award. Therefore, the outside world speculates that this award is for the new JL-3.
The key characteristic of the Chinese produced JL-3 is larger diameter. The length of SLBMs are limited by the diameter of a submarine’s pressure hull. The larger the diameter of the pressure hull, the higher the technical difficulty and cost. Therefore, the length of the SLBM is higher than the diameter. Previously, the length of the JL-1s and 2s exceeded the diameter of China’s Type 092 and Type 094  SSBNs. Therefore, their missile compartments protruded beyond the hull, distorting the SSBN’s smooth cylindrical shape. This increased hydro-dynamic noise and drag.
Therefore, a solution is to reduce the SLBM’s length as much as possible. But increasing the range requires increasing the internal volume to accommodate more propellant, so increasing the diameter becomes the first choice. The early American Polaris A2 SLBM was 9.3 meters long and 1.3 meters in diameter. The length of the Trident I SLBM increased only to 10.3 meters, but its diameter increased to 1.9 meters. Judging from overseas data, the JL-2 is about 2m in diameter, about 13m in length, and has a range of about 8,000-10,000 kms (the range of the missile will also vary depending on the payload).
The largest diameter (beam) of the pressure hull of the competing US Ohio-class SSBN is only about 13 meters. Taking into account factors such as technical difficulty, cost and price, the diameter of the pressure shell of China's next-generation Type 096 SSBN should not exceed 13 meters, so the length of the JL-3is estimated to be controlled at about 13 meters. The JL-3’s range is bound to increase if its diameter increases. So larger diameter for the JL-3 is the key characteristic.
It has been speculated by the outside world that the JL-3 SLBM is about the same as or similar to the French M51 SLBM, which is 13m long and 2.35 meters in diameter. The M51 submarine missile can carry up to 12 MIRVs, but in most cases only 6 are carried. At this time, the maximum range is 13,000 kms. In 2019, the China Aerospace Science and Industry Corporation completed the test run of a domestic large-diameter solid [fuel] rocket engine. Its diameter has reached 2.65 meters [see photo below], which has exceeded the diameter of the M51 submerged missile. Missiles are not difficult. 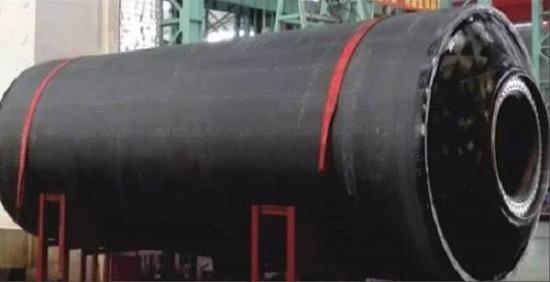 The domestic 200-ton solid rocket engine has a diameter of 2.65 meters, and the black shell indicates that it uses carbon fiber 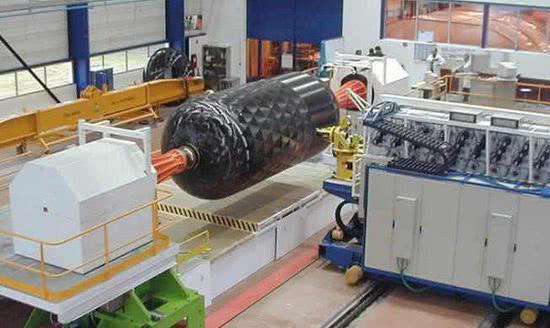 M51 submarine missile is made of carbon fiber winding.
China’s 200-ton thrust solid [fuel] rocket motor has adopted a number of advanced technologies, one most notable is the large-diameter carbon fiber winding composite material shell technology. This should be the first time that we have mastered the large solid rocket motor carbon fiber winding composite material shell technology. This technology is also one of the key technologies of the M51 submarine missile. It makes the missile lighter providing a longer range.
According to overseas sources, the shell of the JL-2’s solid fuel rocket engine is made of aramid, which is lighter than metal but heavier than carbon fiber. Since the year 2000 Chinese carbon fiber has advanced by leaps and bounds. T800 grade carbon fiber has achieved a production capacity of 1,000 tons, T1000 has reached 100 tons, and M60J grade carbon fiber has also been successfully developed, which shows that domestic carbon fiber has three important directions (high strength, high modulus, high Strength and high modulus) have achieved breakthroughs, which laid a solid foundation for the use of carbon fiber on domestic missiles and launch vehicles. Therefore, it can be speculated that China’s JL-3 SLBM solid fuel rocket engines also use a carbon fiber shell, for lighter weight and longer range.
From here, we can roughly speculate that the JL-3 is equivalent to or similar to the French M51 submarine missile, using a large-diameter solid rocket engine and a carbon fiber shell. In the case of carrying 6 MIRVs, the range reaches 13,000 kms or more, and it can cover the main targets of the strong enemy in China's offshore waters. After this type of missile is in service, our strategic counterattack capability will be significantly enhanced to better safeguard national security and rights.
See the article in its original Mandarin and initial translation.
Posted by Pete