On July 2, 2019 I wrote an article "Coming Military Crackdown in Hong Kong?" which included:

"So damage to the Hong Kong Parliament may provide a pretext for a paramilitary police and then a military crackdown. Perhaps a broader circle of democracy activists in Hong Kong will also be arrested.

The Beijing Government can suspend the legal convention that the [Chinese Peoples Liberation Army (PLA)] cannot interfere in Hong Kong's internal affairs. This is because the PLA has always had an underlying or active role in internal security for all regions of China.

The 6,000 PLA troops based in Hong Kong can quickly be reinforced with several brigades of armoured vehicles from the mainland. The PLA's Hong Kong Garrison is under the direct leadership of the Chinese Communist Party's Central Military Commission and under administrative control of PLA's SouthernTheater Command."

Now not so subtle Chinese military (PLA) threats (on July 31/August 1, 2019) to intervene in Hong Kong seem to be making my earlier expressed concerns a reality.

All stating clearly You Choose Your Fate (Being Crushed or Peace) Protesters!

Chinese Foreign Ministry spokeswoman Hua Chunying, when asked about the video, said at a briefing in Beijing on Aug 2(?), 2019:


"We believe that the Hong Kong garrison of the People's Liberation Army will continue to become a stabilising pillar for Hong Kong's long-term prosperity and stability..."

Conflicting reports of a troop buildup on the Chinese mainland Hong Kong Border.

August 1, 8.54am - "The White House is monitoring the sudden “congregation” of Chinese forces at the border with Hong Kong, according to reports, following another night of unrest and clashes between protesters and police."

"I'm not aware of the [PLA gathering near the "boundary" between Hong Kong and the mainland.]"

"Q: According to reports, some Hong Kong civil servants will gather at the Central District tonight to call for the cancellation of the amendment bill to the Fugitive Offenders Ordinance.

There have been claims that the Hong Kong SAR government will take this as a reason to ask the PLA Hong Kong Garrison to enforce martial law on the early morning of [Sunday] August 4.

Reportedly they will clear the staff of American and European consulates-general and American and British passport-holders from Hong Kong. What's your response to such claims?" 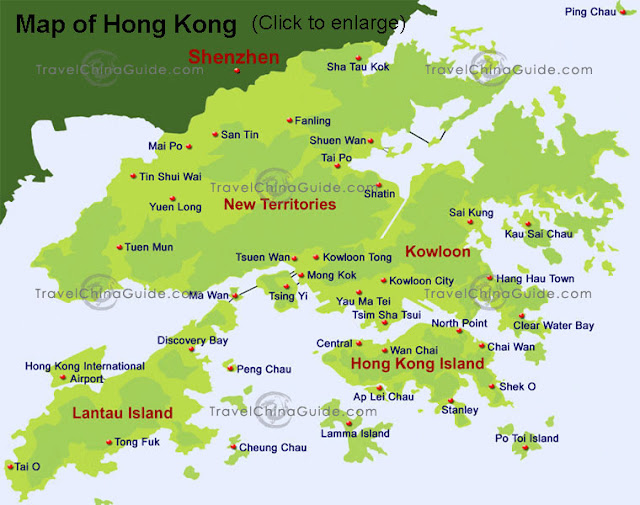 (Map above) "northern" Hong Kong (ie New Territories and Kowloon) shares a land border with "mainland China" providing ample road approaches (from Shenzhen, etc) for troops to provide backup to the 6,000+ PLA already in Hong Kong. Then crossing the bridges south to Hong Kong Island (Lantau and smaller islands) could be the next step. Landing troops by helicopter and from barges/landing craft can always happen simultaneously.

The "gathering" might most obviously mean PLA troop/supply trucks and armoured cars on the road/land border.

The PLA, as the military wing of the Chinese Communist Party (CCP), explicitly follows the orders of the CCP, not the civil Beijing or Hong Kong government.

This means that there would be a greater secrecy/opacity of CCP discussions on whether or when to send in the PLA. Hence a greater chance of Western government and media surprise.

As Sundays have become the traditional time of Hong Kong protests, Sunday August 4, 2019 (Hong Kong time) might be a time of PLA intervention. This depends on how violent/confrontational-to-CCP-order the protests get.

Pete
Pete, "Submarine Sherlock"; also deals with mil-tech intel on other systems, US alliance, Quad; foreign relations nuances, counter-intel dynamics. Close to military (all arms) for 40 years. More than 1,700 published articles since 2007. Have a Master of Arts (International Relations) High Distinction average. If you are looking at an old article, to reach the latest article, click on Submarine Matters, largest letters up top. The best way to navigate this site is to put a keyword in the search box, top left corner.