See Submarine Matter's latest report on the San Juan tragedy at Some Hope San Juan Submarine Crew Sending Messages - But Unlikely, of 19 November 2017 - that is at http://gentleseas.blogspot.com.au/2017/11/some-hope-san-juan-submarine-crew.html

On Friday, 17 November 2017 it was announced the Argentine submarine ARA San Juan had not been heard from for over 48 hours. San Juan was in the southern Argentine sea 250 miles from Argentina's Patagonian coast when it sent its last signal on Wednesday, 15 November 2017 (Partly based on Wikipedia). Specifically San Juan last reported in when it was en route from the Ushuaia naval base to the Mar del Plata base (where Argentina's submarine force is home based).[8]

The search and rescue operations had been launched some 220 miles southeast of San Jorge Gulf.[7]  The initial search and rescue operation was carried out by the destroyer Sarandi and the corvettes Rosales and Drummond, supported by two S-2E Tracker surveillance aircraft.[9] A US P-3 Orion maritime patrol plane (equipped with a magnetometer, gravimeter, and other sensors) has joined the search[12] and the UK has offered assistance in the form of a C-130 Hercules based in the Falkland Islands.[13]

There are at least 44 people on board San Juan.[10] Among them is Argentina's first female submarine officer, Eliana María Krawczyk.[11]

Generally and unfortunately submarines that have been "lost" for 2 to 3 days have sunk with all hands. Likelihood of it being sunk is partly because there are so many means of commmunication on a submarine, to indicate its "alive" including:
-  several types of radios that work to satellites (eg. US Government satellites and Inmarsat) and/or to
Argentinian or foreign naval base stations
-  even in the unlikelihood of all radios failing San Juan could indicate its position by "pinging" its
active sonar(s) to maximum volume. This is a useful means of indicating a submarine's precise
position to listening "passive" sensors (eg. on naval ships) that are even hundreds of miles away.
-  when surfaced the submarine could fire flares and turn on its navigation lights day and night
-  when surfaced the submarine could activate military versions of  Emergency Position
Indicating Radio Beacons (EPIRBs)
-  San Juan, if it can surface, can always contact passing surface ships, fishing boats or coastal
towns/villages

Even though San Juan has had extensive upgrades its hull is old as it was completed in 1983. This means that the hull would be rusted/corroded and may suffer metal fatigue. It would have a more limited diving depth than when it was new.

Other than unintentionally diving too deep to crush depth a submarine can "sink" for many other reasons, including:
-  collision with the seafloor or a hard rock, with an iceberg or with a surface ship
-  crew mistakes in upsetting the buoyancy of a submarine can also be fatal
-  fire, explosion, flood or escape of poison gas can also occur due to malfunctioning of a sub's
lead-acid batteries or torpedo propellant or warheads.

It is most likely that the Argentine Navy and Government knows San Juan was supposed to be "sailing" and what has likely happened to San Juan. But getting divers or a deep submergence submarine to San Juan on the seafloor may cause most of the delay before final judgements can be made. Also strong winds have been delaying search and rescue efforts. Then the Argentine Government will make the difficult decision to announce San Juan's fate.

All that pessimism aside I hope the crew of San Juan have survived. 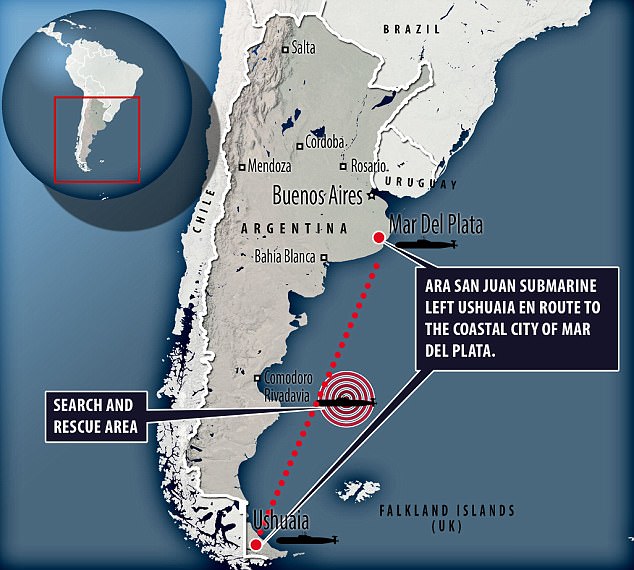 Submarine ARA San Juan was travelling north from Ushuaia to the main submarine base at Mar Del Plata when it vanished (Map courtesy the Daily Mail (Australia Edition).
--- 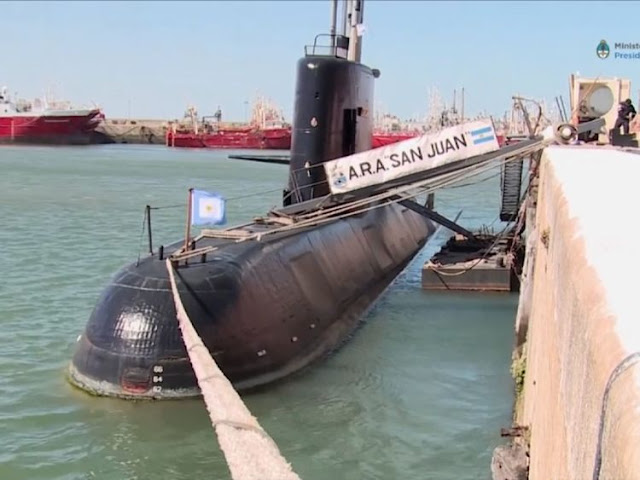 Hi Pete,
Let's hope they find that Submarine soon and in one piece

Let's not write them off just yet:

"Seven failed satellite calls were detected on Saturday that Argentina’s defence
ministry believes could be from submarine that went missing in the south Atlantic three
days ago with 44 crew on board.

The calls, believed to be from the ARA San Juan submarine, lasted between four and 36
seconds, the ministry said in a statement, suggesting the crew were trying to re-
establish contact. The ministry said it was working on tracing the location with an
unnamed US company that specialised in satellite communications."

Hi pete,
With Argentina's Missing submarine. It opens a wide whole as to how modern their Submarines really are. Since their Submarines from 1970's and 1980's era, shows they really need to get new Submarines. I think for Argentina, after this disaster, if they ever want new and more Modern Submarines, maybe it's time they talk to China on getting the export version of the Yuan class SSK or with Russia on the Improved Kilo class SSK.