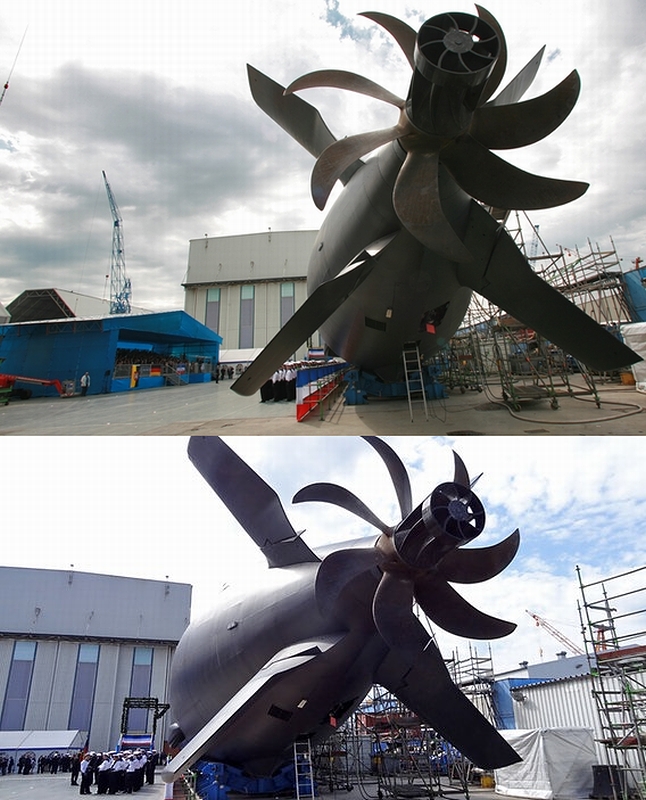 Propeller shot of the latest German Type 212A submarine. The strange small propeller at the end of the 212A's more conventional 7 blade propeller is called a Propeller Boss Cap Fins (PBCF).
---

An effective submarine is made more efficient using a wide range of small, but significant, improvements.

Up to a point the greater the number of propeller blades the slower the propeller needs to rotate to allow the submarine to reach the average patrol speed of around 5 knots. Slower rotation is one way to delay any onset of noisy, propeller damaging cavitation.

The strange small propeller at the end of the German Type 212A submarine's more conventional 7 blade propeller is called a Propeller Boss Cap Fins (PBCF).

"PBCF device was developed in 1987 by Mitsui O.S.K. Lines, West Japan Fluid Engineering Laboratory, and Mikado Propeller (Nakashima Mitsuwa Propeller) and it has been adopted by installed on more than 3,000 vessels worldwide. Its fundamental mechanism and effects have been repeatedly verified through numerous series of model tank tests and actual ship measurements from the first stage of the development."

PBCFs are small fins fitted to a propeller’s boss cap and are made of the same material as the boss cap as shown on the righthand diagram of Figure 1.

Tests on over 60 ships (and preumably Type 212A submarines) have shown benefits of 4-5% in fuel savings and an increase in speed of about 2% (at the same rotation rate). Without the fins, the flow of water around the propeller generates a hub vortex that wastes almost 10% of the engine's energy. The PBCF may also reduce a submarine's stern vibrations, hence reducing underwater noise. A quiet propeller, of course, adds to submarine stealth.

An effective submarine is made more efficient using a wide range of small improvements. The Propeller Boss Cap Fin is just one improvement that might be present on many more submarines than the Type 212A.

I hate to break it to you, but the photos weren't taken by a secret agent (or am I missing the sarcasm). Submarine screws really aren't as secret as most people would have you believe. The basic shape is 1960s vintage, and boss caps like that have been used on Soviet submarines since the late 60s.

Yes, considering that any of the couple hundred VIP guests being shown the sub's (launch?), i'm sure that any number could/would have been able to take pics. however, it is a great pic set. :-)

Noting the configuration of its controll surfaces(and there size) im thinking it would have an amazing turn rate in quite or ultra quite state.

Yes its X-plane rudder may allow the 212s to turn on their own axis.