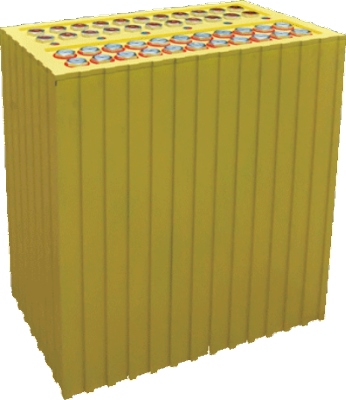 China's 335 kg WB-LYP10000AHA Lithium-ion Battery (LIB) being developed for (or already in) China's 2nd batch of Yuan class submarines. China is also marketing this battery to Russia, presumably for Russian Kalina submarine use.
---

The Yuan class (Type 039A or 41) diesel-electric submarine. The first Yuans probably have Stirling AIP (and standard lead-acid batteries).
---

Following on from Submarine Matters China into Lithium-ion Batteries (LIBs) for Submarine - Can Russia Keep Up? of February 2, 2016, I’ve done further research on Chinese submarine propulsion  and come up with:

It is significant that China's Winston Battery company (aka Everspring or Thunder Sky) has been developing Lithium-ion Batteries (LIBs) for China's latest conventional (diesel-electric) Yuan class submarine. The Yuans carry numbers Type 039A or Type 41.

"The technical information gives some ideas about the size of the battery pack for the Yuan-class of diesel-electric submarines to be equipped with an air-independent propulsion system (AIP) powered from large battery banks.

The battery pack consists of 960 pcs of the WB-LYP10000AHA  cells making the total energy of 31 MWh. The lithium battery is saving some 260 tons of weight against the original lead-acid pack. With this pack the Yuan-class (B-class) diesel-electric submarine can drive 3,300 nautical miles or it can stay under water for 800 hours (33 days). This indicates the average onboard consumption of the submarine when not moving is some 38kW/h."

The first batch of Yuans are widely thought to have standard lead-acid batteries and Stirling AIP. The "B-class" of the Yuans may mean the second batch/Mark 2 Yuans that have LIBs instead of (or as well as) the Stirling AIP. A December 2015 US report to Congress (page 91) states "The YUAN SSP is China’s most modern conventionally powered submarine. Eight are currently in service, with as many as 12 more anticipated." So the 12 may be the second batch - maybe with LIBs?

As can be seen below China is also marketing submarine capable WB-LYP10000AHA batteries to Russia.

The specific Lithium-ion in the battery is LiFeYPO4 (hence the "LYP"). China's near economically exclusive access to Yttrium (Y) means China has a major advantage in offering Yttrium in its manufactured products. For battery experts the advantage of  LiFeYPO4 over plain LiFePO4 is "additional Yttrium at the cathode of the LiFeYPO4 cells speeds up electron transfer especially at cold temperatures". This would be advantageous for Chinese Yuans and Russian submarines starting their engines at sub-zero northern winter temperatures and then contuing through the cold saltwater of winter seas (down to minus 2 Celsius before the water ices up).

For sale to Russia http://winston-battery.ru/products/cells/wb-lyp10000aha (explains in Russian) "This site [dated 2014] is a project of the company IP Corporation, the official partner of Winston Energy Group Limited in Russia.

2.  Do these specs look reasonable for submarines? 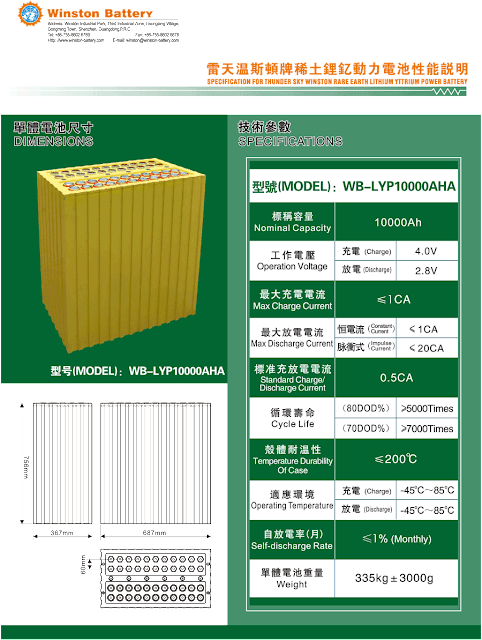 Diagram above is "SPECIFICATIONS FOR THUNDER SKY WINSTON RARE EARTH LITHIUM YTTRIUM POWER BATTERY" and below is "CHARGE AND DISCHARGE CHART[S]". Diagrams and Charts are much enlarged here. 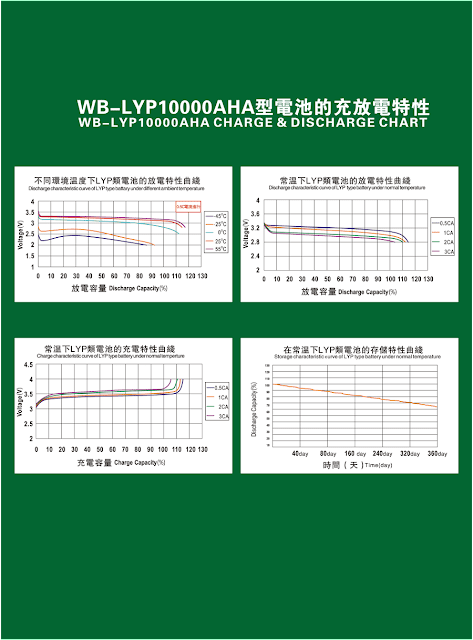 Unless they mean 38KWh when moving at 4 knots for 33 days since the total energy is 31MWh.

The temperature rating of -45C to +85C is industrial grade. I think that should be sufficient for submarines' ambient temperature even when in port.

The cycle life if correct is as good as the best lithium ion battery. And you do not need to trickle charge them if your mission duration is say 2 months.

In any case, if the later Yuan class submarines are using these batteries now, the Chinese is showing a can do attitude that should make Americans and Japanese (and even Russians) worry at night.
KQN

Pete,
Since the Chinese statement is 38KWh when not moving, this points to China using an AIP solution with Lithium batteries. The AIP Stirling plant is dedicated to propulsive needs while the lithium batteries address combat management and other hotel needs. This hybrid solution may be necessary as I do not know if China can produce a 75KW Stirling engine or not? Theirs may be less efficient but this is speculative of my part.
KQN

Thanks for your assessment.

I find performance measures batteries difficult, terminology and all. I'll need to start from https://en.wikipedia.org/wiki/Lead%E2%80%93acid_battery and https://www.youtube.com/watch?v=cxkVxi9P0EA to get up to speed.

Some comparison of likely dimensions of a Japanese submarine's GS Yuasa LIBs "total capacity per group module is 33.9KWh" is at http://gentleseas.blogspot.com.au/2015/10/japans-lithium-ion-battery-advantage.html

Yes China appears much more into LIBs for submarine than previously assumed.

Re " I do not know if China can produce a 75KW Stirling engine or not?"

http://www.china-defense-mashup.com/stirling-engine-used-in-pla-newest-conventional-submarine.html indicates that China may have developed Stirling in parallel with Sweden and/or used some reverse engineering. It appears China has developed Stirling AIP with 75KW performance .

"In March 2007, Science & Technology Daily, One of China official newspapers, publish a news story, which showed that China has used Stirling Engine as AIP power for PLA navy newest Type 039A conventional Submarines.

...For 10 years (from 1991 to 2000), No.711 Research Institute has made the most excellent achievements. In 1998, Jin Donghan and his team made China’s first theoretic demonstrating Stirling Engine, which power is 75KW. Unlike ROK and Australia, China has solved related technological and engineering difficulties in Stirling Engine. In 2002, Jin Donghan’s team worked out an engineering demonstrator. After 20,000 hours’ testing, China’s own Stirling Engine was installed in China’s Type 039A submarine in 2004.

1. Russia doesn't seem to have alot of money for its conventional submarine program. China's LIBs for submarine have expensive? Lithium and rarer Yttrium. So these LIBs may be expensive for Russia to develop.

2. Problems in 1 may be resplved if LIBs were a joint Russian-Chinese venture and China accepted bartered Russian technology (instead of low value Russian rubles). So scenario 2 may be a goer.

Its still unclear whether Russia will finally shelve the domestic "Lada" brand and only concentrate on the domestic "Kalina" brand. In either case the export version may or may not carry the brand name "Amur".

An Improved Kilo is a large 2,350 ton (surfaced) submarine so that would be alot of expensive LIBs.

Answer Not at all

The proposed average onboard consumption of the submarine (38kW/h) when not moving is too low and unrealistic. It should be 120-150kW/h. Simulation by submarine expert shows submarine with LABs can stay 100h-200h. As capacity of WB-LYP10000AHA cell is twice larger than that of LABs, Yuan-class (B-class) can move for 7 days at 4knot and stay for 2weeksas, I think.

We can judge that B-class Yuans does not equip the Stirling AIP by comparison of B-Yanun with Soryu in terms of number and size of WB-LYP10000AHA cells. Total floor area of WB-LYP10000AHA cells with vertically tandem arrangement is 1.4 times larger than that of LIBs of current Soryu. Yuan is smaller than Soryu. The Stirling AIP generators need huge liquid oxygen (LOX) tanks. According to increased floor area of cells, smaller submarine size and huge LOX tanks, B-class Yuans cannot equip the Stiring AIP.

Thanks for those figures.

In your comment above it has for Soryu Mark 2:

I noticed in the earlier article http://gentleseas.blogspot.com.au/2015/04/soryus-on-lithium-ion-batteries.html it has:

In that time, as I did not notice existence of two important documents [1, 2] and other information, I overestimated low speed performance of Soryu MK 2. I recalculated submerged period of Soryu MK2 at 4kt/h, which is 10-14days. This calculation is very rough and various factors are neglected due to lack of additional information, but better than no calculation.

Thanks for the clarification.

This underlines that the whole issue of LIBs and a submarines electrical requirements are very complex.

A November 2015 newspaper report is that there may be shortage of Australian Defence Department engineers with expertise in "next generation batteries" http://gentleseas.blogspot.com.au/2015/11/buying-subs-australian-dods-disrupted.html