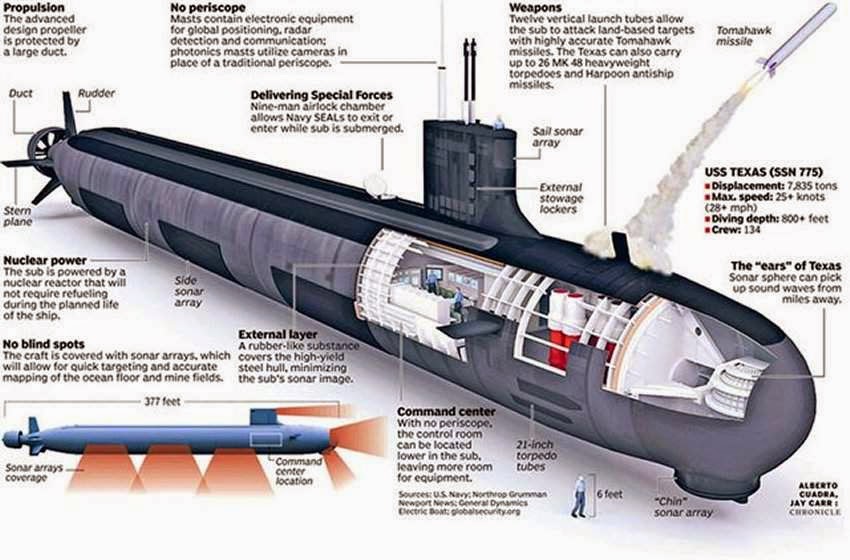 Click on image to expand. Submarine program matters are highly complex being a mixture of what would be ideal (such as the Virginia SSN above) and what is politically, economically and technically feasible. Timeframes are also essential considerations.
---

"Collins subs cost us more than $605m per year to maintain. An early replacement can save us billions which could be spent on new subs with lower maintenance costs. Replace 10 years early saves more than $6Bn and that is possible.

Nuclear powered subs are the only ones that give us the capability we need in a production submarine. Both these have been stated as essential for our new subs. So why not arrange with the USA to crew and possibly lease two Virginia class subs starting in say 5 years? It would save huge sums in maintenance and two operational SSNs have far greater capability than all of our Collins. The Americans would be happy to have us pay for two boats to work in our region as it would save them the cost of doing it. That leaves open the options of having all SSNs or a mix of diesel-electric plus SSNs as we could add SSKs or SSNs to our capability depending on what is available and our perceived needs in the future. The above suggestion meets all of the requirements stated so far and saves heaps of money."

Your claim that $6 Billion can be saved in retiring the Collins ten years early is incorrect on several counts:

-  the Collins has become a more efficient sub for Australia’s needs operationally due to many sunk costs expended over the last twenty years. This included fixing such deficiencies as the combat system, propulsion system and quieting.

-  New subs would have their own maintenance costs.

-  “Nuclear powered subs” mainly meaning the Virginia SSNs do many things well but there are niches for conventional subs (SSKs) as well.

-   A US crewed and leased Virginia may serve the interests of the US in a major war rather than risk destruction in the defence of Australia. It mayalso respond to US orders that might effectively bring Australia into a major war in Northeast Asia.

-  Australian would need to be fully aware of how a Virginia operates and preferably partly or wholey crew it.

-   Two Virginia's are not enough. If one is in dry dock the other couldn't cover east coast, west coast, south and north, as well as forward deployment (say in the South China Sea).

-   Four Virginias would be better.

-   I agree a “mix of diesel-electric plus SSNs” would be even better.

On December 24, 2014 - two days before you made the 26 December comment - I commented as "plantagenet" on On Line Opinion pretty much in line with Alexander Judzewitsch arguments but over a more extended period :

"Getting Virginia nuclear powered subs would be a longshot in the next few years. So we need to work with what is likely...I see Australia ultimately needing two classes of submarines:

6 x medium conventional subs ([2020-2025]). Ideally they would be currently in-production subs (with extended range). That is:
- Soryus (Abbott's Plan A?)
- Plan B? HDW 214 (Dolphin 2 version?) or Scorpene? Their introduction from around 2023 would gradually remove the 5 working Collins from our navy.

4 x Virginia nuclear powered attack subs (SSNs) (Plan C) from 2035, but ultimately serving as SLBM carrying "baby boomers" the main platform for Australia's nuclear weapons (talking 2040 at least). This would depend on a perceived increase in threats - most likely from China.

Submarine program matters are highly complex being a mixture of what would be ideal and what is politically, economically and technically feasible.


ANU’s Stephan Fruehling wrote in ASPI Strategist a most interesting article on this:  Nuclear propulsion and the future of Australia’s submarine force of March 11, 2016

Peter, the costs I provided were examples at a high level. Obviously a detailed analysis needs to be made and here's the problem. Why is the Virginia class not being evaluated? It is the obvious best choice in terms of integration with our other US systems installed on the AWD, F-35, etc. Yes they cost more but are clearly more capable. My suggestion to crew initially two was just a first step to start replacing the Collins. The eventual aim would be to have say 6 Virginia class boats owned/leased and part of the RAN and under the full control of the RAN. Establishing a maintenance facility for our Virginia boats would enable us to provide some maintenance for the US submarines in our region saving the the long trip back to the US then back here again. The USN has stated that 60% of their assets would be stationed in our region. That is a lot of submarines and a lot of maintenance work and jobs for Ausstralianss over a very long period of the order of 40 to 50 or more years.

I've made a copy of your comments and shifted it to http://gentleseas.blogspot.com.au/2015/02/australian-nuclear-sub-option-afr-feb.html. You'll see there is a more extended and lengthy discussion there.

I believe 4 Virginias would be sufficient for Australia. Sufficient because each may well use the Blue-Gold alternating crew system (2 x 115 = 230 crew for each). As US SSGNs and SSNs already dock at Fremantle I think that would be natural base for Australian Virginias and SSNs of our allies.