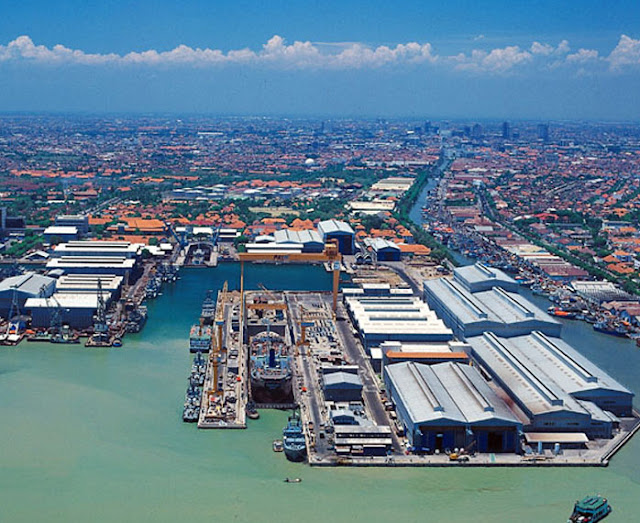 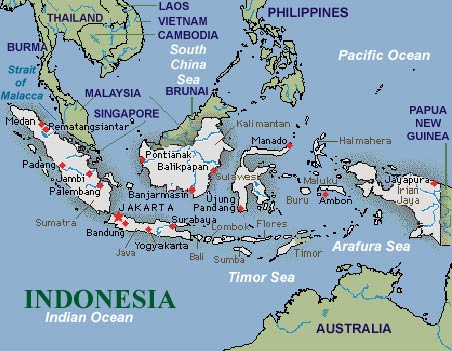 Larger ports in Indonesia are in red, including Surabaya (currently HQ of Indonesia's Eastern Fleet Command).
---

"RI pushes back deadlines after delay on submarine infrastructure

(Jakarta/Surabaya) The government is still working on the infrastructure needed to accommodate three new [Improved Chang Bogo Type 209] submarines from South Korea, with the project scheduled to be completed in December.

Based on the procurement contract between the government and Daewoo Shipbuilding Marine Engineering (DSME), the submarines were scheduled to be delivered last year and this year.

Now, the Defense Ministry has revealed that South Korea will be ready to deliver the [two] submarines by September [2016], however, as Indonesia has yet to complete the necessary infrastructure, the delivery has been postponed until December [2016].

It was reported that the Defense Ministry and DSME signed the contract for the three Chang Bogo-class submarines in 2011. The contract was worth $1.07 billion.

Under the contract, two submarines would be built in South Korea in cooperation with state-owned shipbuilder PT PAL, while the third submarine would be built at PT PAL’s facilities in Surabaya [Pete comment - the 3rd will probably be launched in 2020]..

Leonardi said that besides infrastructure preparation, Indonesia also needed to train the crew members and operators who would be building the submarine in Surabaya, East Java.

...According to [PT PAL production director Edy Widarto]  PT PAL’s new submarine infrastructure will have the capacity to build or restore two submarines at once.

...Edy acknowledged that there was a delay in the plan due to budget disbursement issues. However, he asserted that submarine modules would be delivered from South Korea in December [2016], and that PAL would start to assemble [the 3rd submarine] in January 2017.

Edy said PT PAL would assemble the modules under the supervision of DSME’s experts.

...PT PAL is an experienced ship builder, the company having built several warships for the Indonesian armed forces (TNI) and also products for sale overseas.

In addition to Chang Bogo-class submarines, the Indonesian Navy has revealed its plans to purchase another two new Kilo-class submarines from Russia to expand its fleet. The procurement is part of a strategic plan for 2015 to 2019.

However, the Navy has yet to decide on which type of Kilo-class submarines to order.
Submarines, with their stealth capacity, are regarded as effective deterrents and Indonesian needs at least 12 such vessels to protect its territory.

The Navy currently operates two German-made submarines, the KRI Cakra [link in Indonesian] (401) and KRI Nenggala (402), which were built in the 1980s. The vessels are due to be decommissioned in 2020. [see WHOLE ARTICLE]

Indonesia shares maritime economic boundaries with at least 10 countries, including India and Australia, and its waters take in the Straits of Malacca, one of the world’s busiest shipping lanes that links the economies of India, China and Japan.

The nation’s seas include parts of the South China Sea, where China is locked in territorial disputes with multiple nations and claims areas near Indonesia’s Natuna Islands.
President Xi Jinping has made a navy with longer reach a priority to boost China’s claims in the South China Sea and East China Sea.
Indonesia has sought to stay out of its neighbors’ spats with China and is not an official claimant to areas in dispute. But it has said China’s interpretation of its nine dash-line map — the basis for its territorial claims — is seeping into Indonesia’s exclusive economic zone.
Supandi said he’s not worried about a challenge from China in the Natuna Islands, as China’s not interested in them. Indonesia has four to five ships patrolling the area, which houses a naval and air force base, he said."
COMMENT
The Indonesian Navy's desire to have 12 submarine - the same number as Australia's 12 Future Submarines is probably intentional rather than coincidental. Both navies can point to the 12 the other plans to have. Even if the Indonesian Navy receives six and Australian Navy eight both navies will be happy with more subs than they had before.
Perhaps Indonesia's most pressing maritime dispute is over rights to oil resources at the Ambalat undersea block near the Malaysian (Sabah) and Indonesian (Kalimantan) border.
See earlier informations on Indonesia's Chang Bogo and Kilo issues at Submarine Matter's Indonesia revisits buying Kilo submarines, January 31, 2014
Pete
Posted by Pete

Pete
Peter Coates (Pete) is the Director of Submarine Matters Intelligence (SMI). SMI seeks comments & info on tech, econ, polit & geo-strat aspects of subs, non-sub weapons & regional issues. Pete has published more than 1,800 articles since 2007. Master of Strategic Studies - High Distinction Average. If you've arrived at an old blog article, to get to the latest article, just click on the largest (Blue) "Submarine Matters" title up top. Best way to navigate this site is to put a keyword in the search box, top left corner.

2 Songs on the Tragedy of War