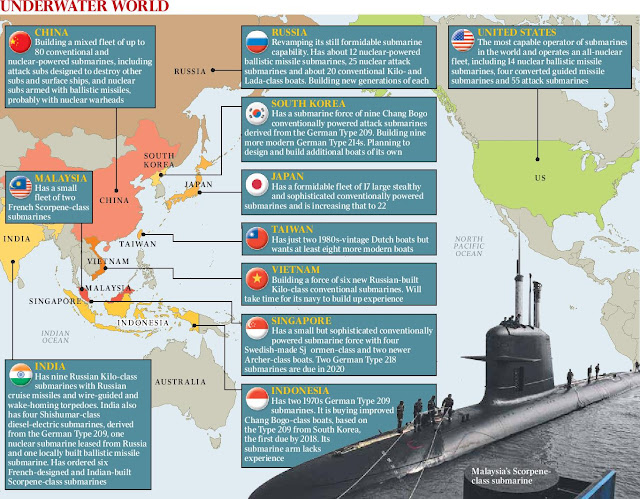 The leaking of Top Secret Cabinet documents on Future Submarine project timings has prompted Submarine Matters to draw together many details on the Collins "life extension" (or "midlife upgrade"). The midlife upgrade may result in much work for Lockheed Martin in cooperation with Saab and Thales.

The Australian Defence Department apparently has been advising for years that the future subs would not be delivered until the early 2030s.

Defence sources said the handover of a future submarine by 2026 was always more of a political aspiration (of former Prime Minister Abbott) rather than a sensible shipbuilding schedule.

Australia’s six Collins subs were launched between 1993 and 2001 which, after the standard 30 years of operation, would usually lead to decommissioning between 2023 and 2031. A submarine midlife upgrade would aim to keep them operating until the mid-2030s.

In the meantime a midlife upgrade of the Collins might include more modern sonar, the latest software and hardware for its AN/BYG-1 combat system, derusting, new batteries, overhaul of the diesel engines and maybe introducing Tomahawks. The upgrade would cost much more than A$2 Billion total.

An additional item which Australia might include in the Collins is Tomahawk (land attack and long range anti-ship) cruise missiles (compatible with the combat system) which would be launched through the torpedo tubes. Wikipedia records: "During the [Collins] construction phase, consideration was given to acquiring submarine-launchable Tomahawk cruise missiles; giving the [Collins submarines] the capability to attack land targets after minor modifications.[44] Plans to acquire Tomahawk or similar land-attack missiles remained under consideration until 2009, when the Defending Australia in the Asia Pacific Century: Force 2030 white paper was released; stating that land-attack missiles will instead be incorporated into the armament of the Collins-class replacement."

With the future submarine delay a decision not to include Tomahawks could mean Australia falling behind in a region with increasing numbers of submarine fired Klub land attack cruise missiles. This is noting that Kilo diesel electric submarines belonging to Russia, India, China, and Vietnam are being fitted with land attack Klubs missiles (with ranges varying from 300km to 2,500km (depending on user modifications)). Indonesia may also buy two Kilo submarines fitted with Klubs.

Saab (as early as October 2015) publically anticipated the likely timeline of the Future Submarines and need for a midlife upgrade of the Collins. Nigel Pittaway in DefenseNews, October 10, 2015 reported:

…Speaking at the Pacific 2015 Maritime Exhibition in Sydney last week, a Saab senior executive said …a Collins midlife upgrade [will be] a cost-effective measure to maintain capability…“In Australia, you have decided on a new submarine program, which is fantastic, but it’s not going to be here for a number of years…”

…Australia is looking to acquire up to 12 new conventional submarines under Project Sea 1000, but has a tight timeline if it wishes to avoid further full cycle docking overhauls, which will need to be performed on at least two submarines if the Collins needs extending beyond 2030.

…However, the slow progress of the program is causing concern that the submarines cannot be designed, selected and built in time to avoid a Collins life extension.

…[Gunilla Fransson, Saab’s senior vice president, Security & Defence Solutions] said that if Saab’s proposal for a Collins midlife upgrade is accepted, the work would be undertaken in Australia. “You sustain the Collins boats here in Australia and I don’t see any reason why you could not upgrade them here,” she said.

“Saab would certainly like to position ourselves to support Australia in an extended Collins life of type. You have a very capable local submarine company in ASC, which certainly has the capability to perform the work, together with Saab Kockums and other local Australian companies.”” [WHOLE DEFENSENEWS ARTICLE]

That is about the price for 3 or 4 new Type 214 submarines.
That would mean new and reliable engines, less crew required, AIP, ...
The submarines could be build on 4 yards (Germany, Greek, Turkey and Sourh Korea) at the same time.

Just an insane waste of money.

Arent those times in service since commisioniga bit misrepresentative?. Some have spent most of the time out of the water either waiting to undergo major upgrades to fix inherent problems, or once they were in service not have the crew to be operational.

As Abbott said , they are a fragile asset, and became to big to fail or they would have been dumped like some more recent acquisitions. The difficult to understand part is that Australia risks repeating the whole new Collins escapade by paying some European manufacturer to design a new submarine from scratch. Those who would say 'lessons have been learned' forget that they are more often repeated viz Lockheed martin who went from one high tech problem plagued aircraft to another, seemingly having learned nothing.
And if you look at TKMS and the problems with building subs in Greece and Turkey, some will say, the same will happen here.

Yes the Collins have probably spent more time being dry-dock Queens at the Adelaide shipyard than on operations. Problem is the special secrecy surrounding submarines means the scale of the dry land inefficiency is largely kept from the public.

If Australia is again allowed to build the submarines a Collins 2 situation is highly likely = late, way overbudget etc.

If the subs were built at Kiel (TKMS), Cherbourg (DCNS) or Kobe (MHI, KHI) some may well be ready around 2026 and for half the price of any Australian build.

But votes in South Australia and lesser extent in VIC, WA and NSW seems to Trump all.

Since the Collins the record of large-scale naval building in Adelaide hasn't improved - see the Air Warfare Destroyer Project http://www.abc.net.au/news/2015-05-22/air-warfare-destroyer-hobart-launch-techport-adelaide/6487870 .

I personally think there is a path for part Australian production outside the pressure hull. Yes its seen as a jobs program, but it would have been cheaper and had more jobs if the the car industry subsidy's been kept on. What sort of madness throws away something you can do for something you cant.
God knows what issues with the AAW destroyers will arise once they are expected to be operational, and they were supposed to be very little change.

The Greek submarines had the problem Greek was not able to pay for them. So Greek tried to invent errors to avoid payments...

The Type 214 for Turkey isn't ready yet.

So I think you had the ROKS Type 214 in mind. There have been no official problems. The problems reported by some news were minor once.

South Korea started with Type 209 right at the same time as Australia with Collins-class. Now they export these type of submarines while the next generation is already commissioned and further units are on schedule.

The Australian need for range is strange. More smaller submarines would be cheaper.

Dear Anonymous,
you should also read the German wiki according to Type 214.

The first order was just for 3 submarines. Another order for 6 more submarines was signed in 2009.

Therefore I doubt that the submarine had such troubles or would you order more of a broken car?

I never order more of a broken car, but, someone did.

It seems that ROK has committed to a submarine building program ( an existing design) and wants to make it an ongoing process.
Greece and Turkey seem to be just dreamers, with their rivalry means one is trying to outdo the other. But it doesnt seem TKMS is doing Turkey an favours and isnt holding up their end of the bargain.