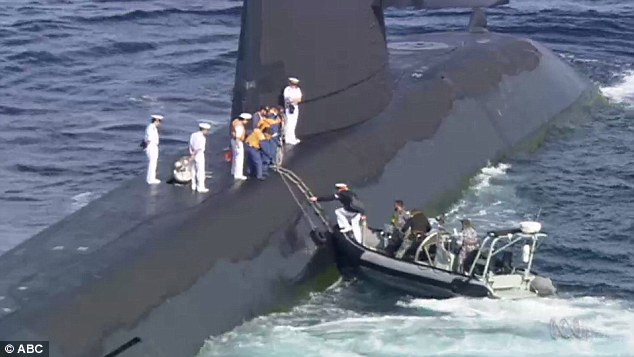 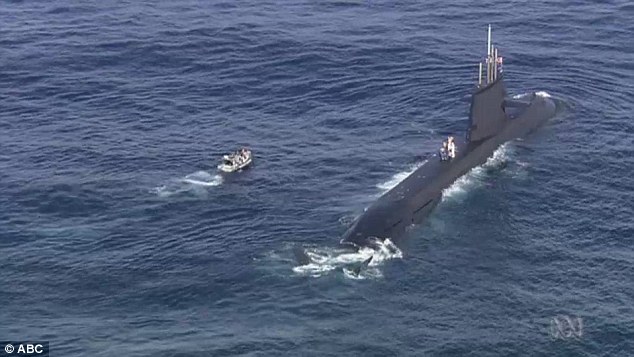 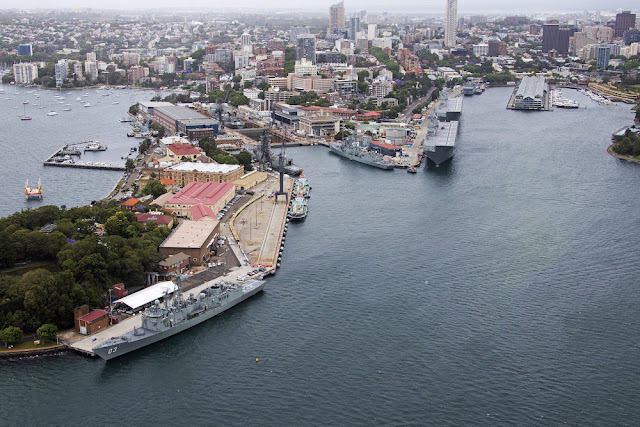 The RAN's Fleet Base East, Sydney Harbour, is where the visiting Japanese flotilla (small fleet) is staying (flotilla being submarine JS Hakuryu and destroyers JS Umigiri and JS Asayuki),
---

This exercise, which has been conducted between Australia and Japan since 2009, is an opportunity to develop and enhance the bilateral naval relationship by practising maritime skills and improving levels of interoperability between our two navies. This is the first opportunity to conduct the exercise off Sydney.

HMA Ships Ballarat, Adelaide and Success will take part in the exercise along with aviation elements including Navy’s 816 Squadron’s S-70B Seahawks and the Air Force’s AP-3C Orion and Hawk 127 aircraft.

The exercise aims to improve interoperability and mutual understanding between the Japanese Maritime Self Defence Force and Australian Defence Force in selected facets of maritime operations.


The previous NICHI GOU TRIDENT was last held in Japan in October 2015."

The Soryu submarine JS Hakuryu (SS-503) is in waters in and around Sydney from Friday, April 15 to Tuesday, April 26, 2016. Only observable inside JS Hakuryu is its standard lead-acid batteries and Stirling engine air independent propulsion (AIP). If Australia buys Japanese submarines they are very likely not to have AIP but instead will have new, high capacity, lithium-ion batteries.

Accompanying that submarine (in what is a small fleet (flotilla)) are destroyers:

Each of these destroyers has a SH-60J(K) helicopter for mainly anti-submarine uses. 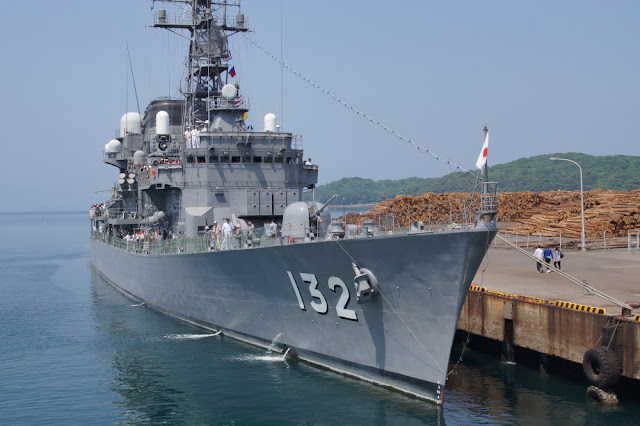 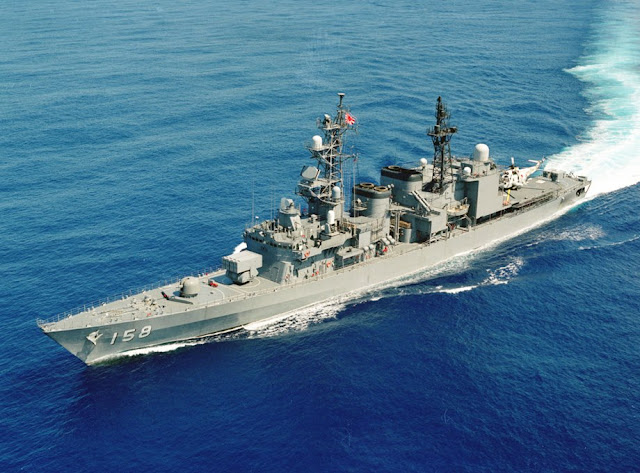 Before reaching Sydney, which is Australia's major Fleet Base East, these three vessels stopped to visit/refuel at US Guam Naval Base.

Umigiri has higher anti-submarine warfare capability than precedent-class Asayuki according to Japanese Wikipedia.

Thanks for the Combat Designation System and other details.

the Future Frigate programme will be brought forward.
a continuous onshore build programme will commence in 2020 – three years earlier than scheduled.
The Future Frigates will be built in South Australia based on a Competitive Evaluation Process, which will begin in October 2015.
The terms of reference and scope of work are being prepared by Defence for this CEP. An Analysis of Alternatives is currently being executed by the RAND Corporation to identify potential designs for the Future Frigate."

DCNS might also be in the competition for the fregates so if the fregates that they build are good maybe that Australia could do like a giant order. But i don't know if it is even possible to do so.

By the way, I introduce status of development of destroyers as reference.

Thanks for all that research on Japanese Destroyers.

I aim to do post on Japanese Destroyers (including helicopter carriers) in the next two weeks.

be advised that the visit of the Japanes submarine did not jump out of the box. These kind of ship visits and exercise participations are usually planned well ahead of time, at least 1 1/2 to 2 years in advance. And why do you think that France or Germany should showcase their submarines? If they did so, everybody would argue that these are not the boats Australia wants, therefore why bother in the first place?
Be assured that all the necessary people writing the recommendations and the decision makes have seen, smelled and touched French and German submarines.
The French and the German offers do indeed get a lot of support from their Navies. You should be aware that DCNS is owned by the French Government, therefore a French Navy support is given, and the support of the German Navy has always been there, as you might have seen last year in October in Sydney and in the vast number of press articles and statement which are out there. Again, why bother bringing one of their boats to Down Under to showcase something that the RAN is not interested in?
The really interesting questions is rather what the customers of French, German and Japanese submarines think about the support ehy have been given by each contender in the past - although it is probably very hard to find a customer for Japanes subs outside Japan...
Cheers,
BK

Yes, very true "why bother bringing one of their [German and French] boats to Down Under to showcase something that the RAN is not interested in?"

But yes it would be unconvincing to the Australian public and military because Germany and France's last built SSKs are much further from what Australia wants than Soryus.

If we wait until 2020 we might see a "Shortfin" hull but, unhelpfully, with nuclear Barracuda insides.

Anything less than enlarged Soryus 2031- then from the late 2040s late model Virginias may be chancy steps for Australia.

I'll publish your http://blog.livedoor.jp/wispywood2344/others/Soryu_Cutaway_Variants.svg diagrams and text on Tuesday 19 April as interesting in the Soryu in Sydney grows.

HMAS RANKIN SSG78 is visiting Japan for implementation of joint training with JMSDF.

Hanshin Base is very near Kobe CBD which is very famous sightseeing area. But, we should not forget Motoyama or Okamoto areas which are 2km away from Hashin Base. These are very popular for young people and famous for bread. “Backer Brusch” in front of Motoyama station is one of the most popular bread & pastry shops in Hanshin area. All the pastries of this shop are quite tasty and if we try to get these types of pastries in Tokyo, we must pay at least twice.

Thanks for the Kobe tourism details - sounds peachy. Here's some photos https://www.tripadvisor.com.au/Attractions-g298562-Activities-Kobe_Hyogo_Prefecture_Kinki.html

I'm hoping that (after Australia chose France) the JMSDF doesn't give Rankin a difficult time during the Exercise. For example no use of "signalling depth charges" https://en.wikipedia.org/wiki/Depth_charge#Signaling .

We do not have any bad feeling against brave Aussie submariners. In a sense, they are victims of bad politics and building works.

Thanks. I was just joking about the https://en.wikipedia.org/wiki/Depth_charge#Signaling .

Pete
Peter Coates analyses techno-political aspects of submarines, China, Australia, eco-political intelligence, Trumpizm and poetry. More than 1,500 published articles since 2007. Have a Master of Arts (International Relations) High Distinction average. If you are looking at an old article, to reach the latest article, click on Submarine Matters, largest letters up top. The best way to navigate this site is to put a keyword in the search box, top left corner.