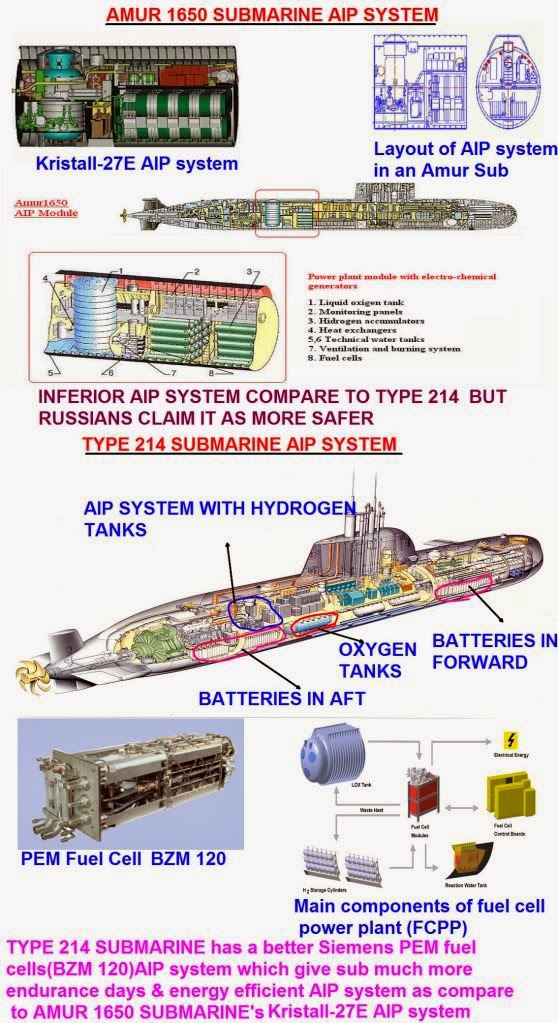 AIP Amur 1650 (export name of the larger version of 4th generation Lada Class) compared to the HDW 214. The Amur-Lada may be the closest representation available of what the Kalina may look like. (Diagram courtesy of http://cintabelanegara.blogspot.com.au/search?q=amur+1650 )

Russia hopes that it could develop the 4th generation Lada-Amur class have been discontinued because Russia has been unable to develop satisfactory air independent propulsion (AIP).

Ladas have failed as a new class as they have no AIP. This makes prospects for an Amur class from dim to nil.

January 2016 reports from Russia are that Russian AIP (essential to market Amurs) has not been developed hence additional Ladas (after L2 and L3) and any export Amurs will no longer be built. Prospective Amur customers have probably been offered the existing Improved Kilo (636) class instead. This is assuming customers would not accept a Russian offer of a future "fifth generation" Kalina class SSK - with the Kalinas only likely to be operational (with AIP) in the Russian Navy in the mid 2020s.

On March 19, 2014 Admiral Viktor Chirkov, Commander of the Russian Navy, announced the future development of a Fifth Generation conventional diesel-electric submarine, dubbed Project Kalina. The Kalina Class submarines would be fitted with an air-independent propulsion (AIP) system. Russia’s Rubin Design Bureau expected the Kalina design to be completed by 2017 and perhaps the first Kalina to be fitted with AIP by 2018. But launch in the early 2020s is more likely.

Given China’s earlier interest in buying four Ladas China may be the first customer for Kalina Class submarines. These largely marketing statements for the Kalina Class provide a timely opportunity to look back at Russia's post World War Two conventional submarine development.

Third Generation – Kilo (Project 877 and 636). The first Kilo (of the Project 877 series) was commissioned into the Soviet Navy in 1980. Production of 877s continued until 1999. Upgrades, particularly adding Club missile capability continue. Commissiong of the first Improved Kilo (of the Project 636 series) was in 1997 with the first boat going to China. Production of new 636s continues with orders up to 2016.

Fourth Generation – Lada Class (Project 677) – also marketed as the Amur 1650 and smaller Amur 950.
The first and only submarine of the Lada Class, was the St. Petersburg (lets call it Lada 1). Lada 1 entered sea trials in 2004 but has proven unsuccessful due to propulsion and other problems, which may include or explain lack of AIP. Lada 1's displacement is 25% lower than submarines of the preceding Kilo Class submarine. Significantly two other submarines in the Lada Class (lets call them Lada 2 and 3) are partly built - but with no AIP.

Fifth Generation – future Kalina Class (the future first of class can be called Kalina 1). Kalina 1 may be ready for trials after 2020 fitted with Russian AIP (when developed) or retrofitted with AIP.

Comment - It appears that Russia is not developing AIP for its own submarine corps but instead is devoting more resources to build up its nuclear propelled SSNs and SSBNs (with nuclear being the ultimate AIP). Customers have restricted their purchases to non-AIP Kilos - that are less expensive and less technically risky than AIP Ladas. It will be interesting if the Lada-Amurs or future Kalina sells - we are talking years.

Regards your reference to:
http://www.military-quotes.com/forum/kristall-aip-submarine-alternative-t50360.html This article was not written by a Russian, but by the inventor of this powering technology type, an Australian.

The technology was formally declined by representatives of the ADF (Navy Office) as a power plant format for Surface Combatants and there was no response from the Australian Submarine Corp. to initial letters regards the possible advantages of using this same technology, as an upgrade path for the Colins Class submarines.

Consider the fifth generation, non-nuclear powered AIP submarines being discussed by Sergey Sukhanov (Rubin Design Bureau) in the article you reference and ponder the ;evel of improvement then available for an upgrade of the Colins Class and then ponder the level; of inferiority of any attack submarine acquired, nuclear or non-nuclear, by the ADF, if it is not powered by a system equivalent to the Russian AIP format.
Rather than being behind AIO submarine development as you state, they are some two decades ahead of of the rest of the world.
NERO

Thanks for the info. I've altered the text accordingly.