"MOSCOW, March 1. /TASS/. Russia has created a small-size super-powerful nuclear power plant that can be installed on a cruise missile, which will ensure an unlimited flight range and invulnerability to missile and air defense systems, Russian President Vladimir Putin said in his [March 1, 2018] annual State of the Nation Address to the Federal Assembly on Thursday."

Drawing form Wiki. The Supersonic Low Altitude Missile (SLAM) was a US Air Force project conceived around 1955, and cancelled in 1964. SLAMs utilized unmanned nuclear-powered ramjets and capable of dropping off thermonuclear warheads (see youtube below) deep into Russian or Chinese territory.


The development of ICBMs in the 1950s rendered the SLAMs idea obsolete. Advances in defensive ground radar also made the stratagem of low-altitude evasion ineffective as did satellite lookdown radar and optical/infrared anti-missile sensors.

The use of a nuclear ramjet engine (developed under Project Pluto) in the airframe promised to give the missile useless low-altitude range of up 113,000 miles (ie. 182,000 km) more than four and a half times around the world. At a SLAM's projected speed of Mach 4 this might represent a 2 hour and 50+ hour flight time! This SLAM would then provide good target practice for long alerted enemy defences.

Drawing from Wiki. The SLAM program was scrapped due to the grave dangers of testing over land or even sea as the fully “hot” reactor ramjet would generate large amounts of unshielded radioactive exhaust/fallout. The reactor heated up to more than 1,400 °C for much of the flight profile. The missile skin might even rise to 2,000+ °C due to lower altitude air compression and friction at the SLAMs hypersonic speeds.

Compare this to ICBMs that in midcourse detach from their hot boosters then operate in low heat or no friction altitudes, can break into 12 MIRVs, drop chaff and decoys, moving at Mach 20 and hitting their targets much faster - 18 minutes,.

1.  Is Putin strategically serious or is he making a politically bellicose pre-election comment before the March 18, 2018 Presidential Election? I would say after Putin's almost certain re-election the nuclear powered missile will be declared a multi-year project and quietly ignored (ie. shelved).

2.  Will Trump, as always falling for Putin's utterances, decide that the US should build its own nuclear powered cruise missile, wasting $Billions on Project Pluto 2?

As Trump reputedly cannot read more than a short paragrouph he may be impressed by the above stirring youtube, before spending $Billions on Pluto 2.
---

The following, mainly 1950s-1960s, artworks on Pluto SLAMs are from a French language site, spotted by Anonymous and titled "Aeronautical Nuclear Propulsion" based on sources at the bottom of http://jpcolliat.free.fr/x6/x6-10.htm. 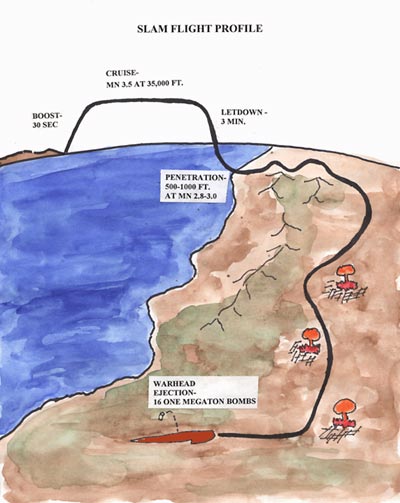 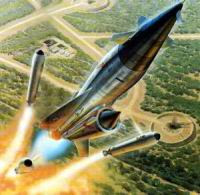 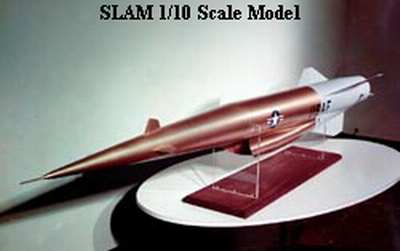 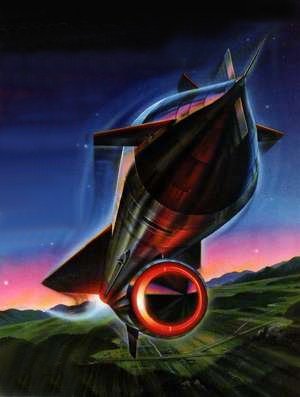 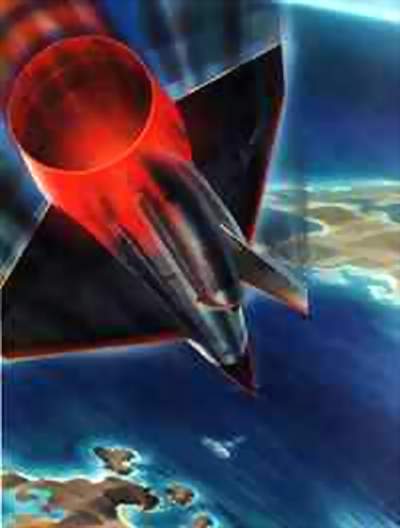 SLAM wasn't an unworkable weapon, it was simply an impractical one. It was very expensive, couldn't be safely tested, and because it poisoned everything along it's flight path, was only suitable for a full scale nuclear exchange. One can imagine that it also couldn't be flown over friendly, if not also neutral, territory. That said, unlimited Mach 4 range would hardly be 'useless' even in today's air defense environment, let alone 1960. But compared to the invulnerability, flexibility, and lower cost of ICBMs, SLAM was pointless and was cancelled.

It's important to view this and the nuclear powered UUV development with the backdrop of the US withdrawing from the ABM treaty. The US has three major ABM projects, only one of which is technically capable of intercepting ICBMs (Ground Based Midcourse Interceptor) which is deployed at two sites in tiny numbers. However read up more on the SM-3 Block IIA: its kinematics push it to the point of potentially being within ICBM interception capability. And a follow on purpose built ABM system certainly could be fully anti-ICBM capable:

This is problematic for two reasons: the abundance of Mk41 launch tubes and ABM radars in the USN, which can be positioned as need along the US coast, and Aegis ashore, which is installed in Poland and could quickly be installed in the US (one is already in Nevada for testing purposes). The US could rapidly deploy an fairly large anti ICBM system were it to build a small number of 'ashore' stations inland in the Dakota/Great Lakes areas while deploying ships as coastal defense units in an emergency - or first strike. This has the Russians addled in much the same way Star Wars did in the 80's, only in this case the deployment is far more possible (we can add to that the fact that SM-3 clearly is an LEO ASAT capable system).

So this nuclear cruise missile project project, along with the supposed nuclear powered multi-megaton warhead UUV, is either propaganda to threaten the West with asymmetrical threats (and assure Russians of their security) or else possibly a real act of paranoia to bypass traditional ICBM nuclear delivery. Neither platform is a militarily useful way to deliver a nuclear warhead compared to ICBMs or even conventional cruise missiles, but on the other hand the Russians don't lose much by threatening to produce such weapons. Indeed, technically neither is especially challenging to develop, as proven by the fact the US largely already developed one of them a half century ago.

My "useless" point was mainly about the SLAM's most distingushing feature, that is reactor dependent 113,000 mile range. This would present a very easily detectable hot missile going over and over the Russian target.

Also the SLAM was too slow for its intercontinental travel function against which the Soviets could have fired retaliation ICBMs that would hit America before the US SLAMs hit the USSR.

The SLAM was also potentially jammable unlike the ballistic (falling MIRV) phase.

As far as I know, there is no minimum range. It could fly ten miles and detonate or run into something. Of course the problem being that even without a warhead it would have a huge amount of radioactive fuel that hadn't been spent.

SR-71s were still problematic to intercept up until their retirement. I have a hard time believing a Mach 4 target at lower altitude would be dramatically easier. A SAM may not have to climb as high up but radar detection ranges and interception windows would be *much* smaller. I suspect something like SLAM would be hard for anyone to intercept, if the firing country were willing to accept the fact that every thing it flew over was poisoned (including the launch position).

The primary drawbacks seem to be expense per weapon and the inability to use or even test such an engine under most conditions. It's still impractical and I still think it's propaganda bullshit on the part of the Russians, but that doesn't mean a mach 4 low altitude missile of unlimited range would be easy to intercept either.

It appears China Shipbuilding CSIC is working on a nuclear CVN with EMALS Catobar, as well as a new SSN and SSK. That CVN could be the 4th unit, after the diesel Catobar carrier. Fall 2017, Chinese succeeded an EMAL test launch of a modified J15 for Catobar.
Also in the news, it appears the test of the railgun on board a landing ship in the sea of Bohai was successful.
KQN

Looking at another program that effectively has unlimited range and can drop off missiles, there's the X-37 unmanned space plane https://en.wikipedia.org/wiki/Boeing_X-37#Specifications that can travel at Mach 22.

The US and maybe China can afford such projects, but Russia maybe not.

More difficult to define and identify "new" Chinese SSKs as they seem to be ever more advanced, quieter, VLS capable, variants of the Yuan https://en.wikipedia.org/wiki/Type_039A_submarine#Chinese_specific_variants

China looks like it has a rapid carrier development plan, but it may need to slow down to achieve multiple ship of one type production. So
- https://en.wikipedia.org/wiki/Type_002_aircraft_carrier conventionally powered with EMALS CATOBAR and
- https://en.wikipedia.org/wiki/Type_003_aircraft_carrier nuclear powered with EMALS CATOBAR and

Yes China is testing a railgun https://en.wikipedia.org/wiki/Railgun#People's_Republic_of_China but hopefully (for China) not rushing them into service before the strategic issues and small number of ships economics are worked out.

Pete
Peter Coates analyses techno-political aspects of submarines, China, Australia, eco-political intelligence, Trumpizm and poetry. More than 1,600 published articles since 2007. Have a Master of Arts (International Relations) High Distinction average. If you are looking at an old article, to reach the latest article, click on Submarine Matters, largest letters up top. The best way to navigate this site is to put a keyword in the search box, top left corner.