French magazine Mer et Marine (Sea and Marine in English) just over a year ago (October 7, 2016) published a very interesting article describing Naval Group's (was DCNS's) second-generation fuel cell (FC‑2G). That article is by Vincent Groizeleau at https://www.meretmarine.com/fr/content/submarines-dcns-unveils-fuel-cell-aip. Mer et Marine is a paysite with perhaps a limited number of free views of the article's many photos, diagrams and much more text.

The following is a summary of a small part of the article [with straight quotes where indicated]:

Naval Group’s Indret plant near Nantes, (in France) specialises in propulsion systems for the French Navy and for international customer navies. Since, around 2008, a team at Indret has worked secretly to develop a second-generation fuel cell AIP for submarine.
Naval Group's MESMA first generation AIP, now around 25 years old,
[Pete comment...MESMA is essentially a modified version of France's more used nuclear submarine propulsion system. Instead of heat from nuclear fission MESMA uses heat generated by combustion of ethanol and oxygen. The problem is that unlike nuclear the MESMA system produces inadequate power and for too little time to accommodate nuclear grade coolant or heat shielding measures. While MESMA can generate more power than other AIP technologies this is at the expense of running detectably hotter and for a shorter time than competing AIP technologies. Just 3 foreign submarines (that is 3 Pakistani Agosta-90Bs) are fitted with MESMA.] 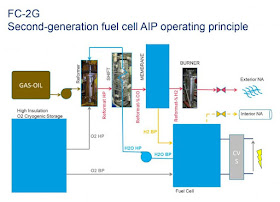 (Diagram from Naval Group (was DCNS) via Mer et Marine)
---
Naval Group is therefore developing a major improvement on MESMA, which is the second-generation fuel cell technology (with the acronym reversed in French being “FC‑2G”). In FC‑2G hydrogen is produced “[straight quote] from standard diesel fuel by chemical re-formation. In parallel with this effort, the group also developed a patented system to inject nitrogen into the oxygen supply line in the same proportion as in normal air resulting in a mixture that is far less reactive than pure oxygen. This ‘synthetic air’ is then injected into the fuel cells where it reacts with hydrogen to produce electricity.”

[Why FC-2G is better than competing approaches]
"[straight quote] Of the fuels considered by DCNS’s AIP engineers, fuel oil offered significant benefits over ethanol and methanol particularly in terms of safety: “methanol vapour is toxic in the event of a leak while ethanol is flammable at temperatures over just 13 to 14°C,” says Xavier Mesnet, a former submariner who today heads up the group’s Marketing and Development team. But this is not fuel oil’s only advantage. Fuel oil is easy to store and is the same as that used by conventional diesel-alternator sets. It is also readily available all over the world, and, “unlike hydrides, which require complex port and handling facilities, fuel oil is easy to store, purchase and transport”."

See current description of FC-2G on Naval Group's website as at November 4, 2017.

It would be interesting to know how much progress Naval Group has made since October 2016 in terms of packaging FC-2G for customer navies?
-  Fitted or Retrofitted?
-  For India's Navy for the Kalvari-class and Project-75(I)?
-  any interest from the RAN for Australia's Future Submarine?