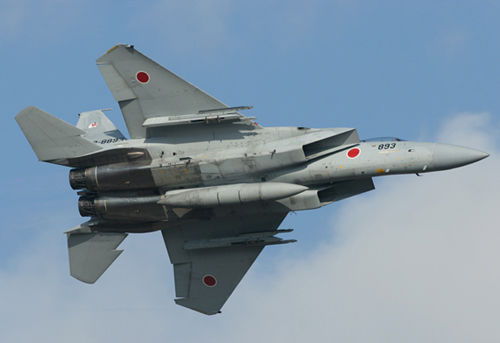 An Okinawa (see Naha on map below) based Japanese F-15J built under licence by MHI.
--- 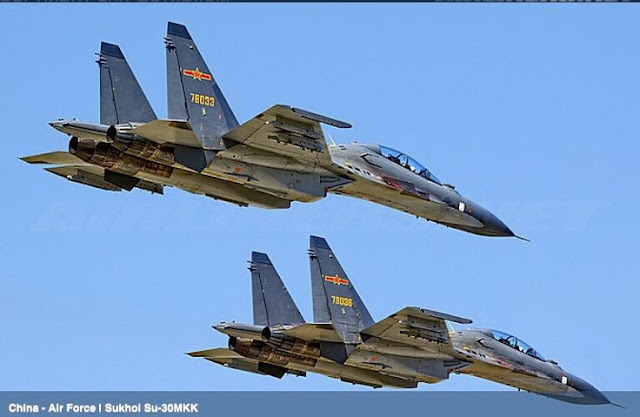 China's top of the line air superiority fighters - 2 of the 73 Russian built Sukhoi Su-30MKKs delivered to the Chinese PLA-AF in 2010. Russia has also delivered comparable Su-30MK2s.
---

In Comments on June 29, 2016 S has recounted some dangerous Chinese actions that threaten international peace.

General Oda explains if armed jetfighters meet within missile range, it could become a hair-trigger situation. The Chinese PLA-AF jetfighters usually keep within a regulated distance from Japanese jetfighters to show peaceful intent. Until the event reported by General Oda PLA-AF fighters had not flown south into Japanese airspace over the East China Sea and had not assumed a hostile stance against a Japanese Air Force fighter [probably scrambled from Okinawa].

But, this time, conditions totally changed. At least one PLA-AF fighter rapidly crossed into Japanese airspace over the Senkaku Islands (see red circle on map below) and showed an attacking behaviour against a Japanese jetfighter. The Japanese fighter avoided the attacking behaviour using a defencive manoeuvre. As the Japanese pilot judged he would be involved in dogfight with unforeseen consequences he withdrew and avoided possible air-to-air missile attack by using self-defence systems.

In writing this account General Oda, a former fighter pilot, well understands how serious the situation was and the need for immediate action. Such aggressive Chinese behavior had not been even experienced during the Cold War (around 1950 to 1992) and was the first-ever dogfight involving the modern Japanese Air Force.

If PLA-AF and Japanese fighters, equipped with missiles and aerial cannon, are involved in dogfights, a collision of fighters or firing of missiles is possible.

Pilots of the Japanese Air Force are strictly controlled and disciplined - so do not fire air-to-air missiles prematurely. But, pilots of the Chinese PLA-AF are relatively inexperienced - making their behaviour unpredictable.

Although PLA-AF jetfighters have repeatedly approached Japanese airspace, they have never conducted jetfighter overflights of the Senkaku Islands (see red circle on map below). But, China now seems to judge that she has the right to do so.

China has been seeking a chance to establish effective control of territorial waters and airspace of the Senkaku Islands using jetfighter and PLA-N warship incursions. Now, China judges that she has the right to do so.

This situation is extremely serious. Of course, it has also been reported to the Japanese government. But, perhaps because of the difficulty of understanding its seriousness, Japan does not seem to have taken diplomatic action. So it has not become news. This unnecessary and dangerous Chinese provocative behaviour did not happen sporadically or accidentally, and it still continues. This is problem.

Now China, having crossed the line, has seen the lack of action by the Japanese government with respect to aggressive Chinese behaviour.

Serious confrontations in the sky will follow. They may not remain limited to confrontations, kept secret, between jetfighters. Dangerous provocative behaviour by the Chinese PLA-AF in the sky should be quickly announced and publically revealed to the international community - as it is a threat to international peace.

On July 29, 2016 the Japanese Ministry of Defense (MoD) in an article published in the KYODO NEWS (a leading news agency) corroborated the accuracy of General Oda’s article.

More on Submarine Matters from, and about, General Oda's article on Thursday, June 7, 2016. 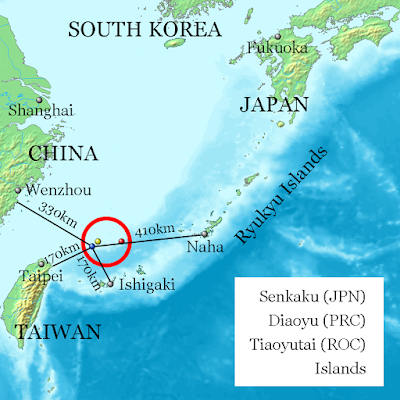 The jetfighter confrontation occurred within the red circle, which is over the uninhabited Senkaku Islands in the East China Sea.
---

S and Pete
Posted by Pete

China is countering Japan claims. As expected, the propaganda machines will be working overtime and it is going to degenerate into a "I say, you say" kind of things.
KQN

Yes the combination China/Taiwan versus Japan all think they have the purity of truth.

I just see the Senkakus as uninhabited islands that are geographically closest to Taiwan. But Taiwan is not as strong as Japan or the US underwriter (from 1945-70s) of the Senkaku dispute.