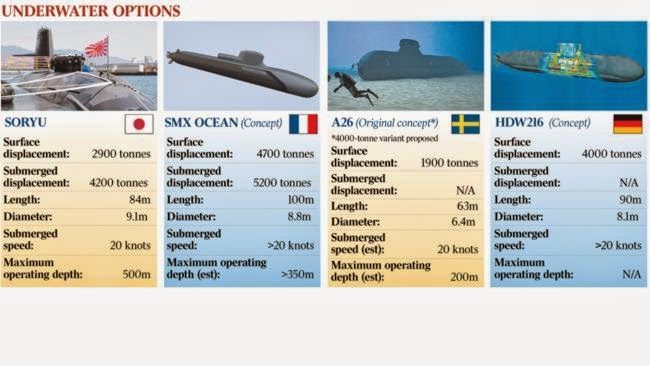 Japan, France and Germany are the last three contenders for Australia's future submarine (SEA 1000) competion. The specifications of Swedens A26 (above) have not been made public. The A26 figures may be accurate with suppoting information of a displacement around 2,000 tons. (Diagram courtesy The Australian)
---

Good news from Sweden of (pending) production orders for two A26 middle size conventional submarines for Sweden’s submarine assembly line. Australia-Sweden submarine relations have been under stain over the last few weeks due to another of Abbott’s undiplomatic statements – that Sweden cannot build modern submarines. This was in the context of Australia's removal, in February 2015, of Sweden as a contender in Australia’s submarine competition.

Swedish made submarines are not at all out of date. What may have concerned the Australian government more was Saab's (perhaps too strongly) politically insistent campaign alongside South Australian interests for "build in Australia". This may have been understandably prompted by Sweden's deep experience of building the Collins in Australia. Whatever the merits of the Collins build the Collins experience causes caution in politicians. Politicians, most of the public and fair-minded people are almost all outside of the professional inner circle and other interested parties who see/saw virtually no problems with the Collins build.

Under the, perhaps already decided "one horse race" called the “competitive evaluation process” DCNS’s position is not secure either. If Japan dropped out, for whatever reasons and/or the Australian Coalition Government fell, the possibility of returning Sweden to the selection process migh be more favourable.

Anyway Sweden has made a positive announcement below, which should reassure potential customers that Saab-Kockums are a going submarine concern. I’m wondering whether there will be further announcements on 2 to 3 additional A26s for a total of 4 or 5 A26s to replace the 5  submarines currently in Sweden's submarine service ("flotilla"). An added concern is the emerging Russian threat in the Baltic Sea. Sweden might also wish to build 2 to 4 replacement submarines for the Netherlands although the Netherlands has not yet released details of what it wants. In that regard please connect with http://gentleseas.blogspot.com.au/2015/02/sweden-and-netherlands-replacement.html of February 19, 2015.

Sweden is to buy two new submarines from constructors Saab Kockums. The A26 subs are to be delivered by 2022 and will cost up to SEK 8.2 billion ($945 million).

"This is the biggest single decision when it comes to economic investments that we will make during this parliament. The decision, to be formally made by the cabinet on Thursday, is to ensure Swedish submarine capability past 2030", stated Defence Minister Peter Hultqvist.

"These are the next generation of submarine. These submarines will be very hi-tech", he added.

The Swedish government is increasing its defense spending over the coming years, citing a worsening security situation, particularly Russian activity in and around the Baltic Sea.

Defence and security company Saab welcomes the Swedish Minister of Defence, Peter Hultqvist’s, announcement to invest in two submarines of the next generation, A26.

[Acquistions are a multi-stage process, hence not finally signed yet.]

Saab has not received any order on production of the new submarine but Saab looks forward to the discussions, which will lead to an agreement and order for A26. This will be a part of an earlier signed Letter of Intent.

Saab and FMV (The Swedish Defence Material Administration) signed a Letter of Intent in June 2014 regarding the Swedish Armed Forces’ underwater capability for the period 2015-2024. The Letter of Intent comprises support, development, design and production of submarines and other underwater systems, corresponding to potential orders of approximately SEK 11.2 billion [US$1.3 Billion], provided that necessary decisions are made." ENDS

The French design has historically low reserve buoyancy, even going back to the late 19th century and it appears their SMX/Barracuda stay true to that philosophy. The Soryu reserve buoyancy is much higher, almost to the level of the Russian design but not quite. I believe both US and German designs also have higher reserve buoyancy than the French.

Yes the reserve bouyancy of only 500 tons is small. A small proportional difference 5,200 - 4,700 tons . I don't know whether DCNS is serious in offering the overweight SMX Ocean for the submarine selection.

This is a social network for world's shipping community:
https://www.shippingcluster.com

Pete
Peter Coates (Pete) is the Director of Submarine Matters Intelligence (SMI). SMI seeks comments & info on tech, econ, polit & geo-strat aspects of subs, non-sub weapons & regional issues. Pete has published more than 1,800 articles since 2007. Master of Strategic Studies - High Distinction Average. If you've arrived at an old blog article, to get to the latest article, just click on the largest (Blue) "Submarine Matters" title up top. Best way to navigate this site is to put a keyword in the search box, top left corner.

2 Songs on the Tragedy of War