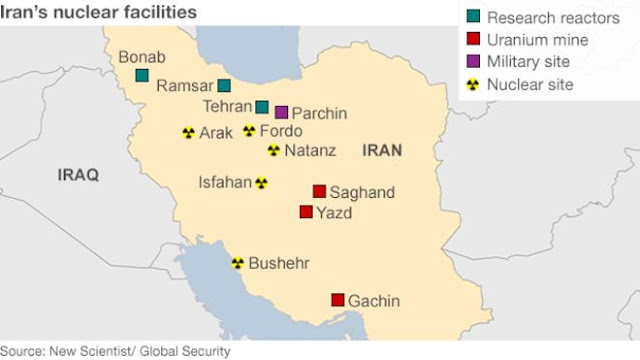 Map of Iran's highest priority nuclear facilities. This includes the research centers at Tehran and  Isfahan/Esfahan (from which Submarine Matters' site-meter picked up Iranian reader interest in computer simulations of nuclear weapon explosions) see below.
-------------

The whole bomb Iran issue is dominated Israeli and US politicians-officials. Most effectively the US National Security Advisor, John R. Bolton (from the years he worked for Reagan, to the present day).

Repetition of "when not if we should bomb Iran" commentary is usually unhelpful in the absence of first hand data. By the time data reaches these commentators it is often highly distorted and third or fourth hand. The following research and some analysis is intended to fill part of the void in knowledge.

Submarine Matters direct technical monitoring of  the Atomic Energy Organisation of Iran (AEOI) as far back as 2006 reflects Iran's ongoing interest in nuclear weapons research as an option for Iran. The AEOI is active in many university institutes, cities and isolated sites in Iran, particularly in Tehran and Isfahan (aka Esfahan) a large city about 350 km south of Tehran.

Like all research communities the Iranian nuclear community uses internet searches for general and specific purposes. Internet search for sensitive nuclear topics involves inherent security risks for searching organisations - so sensitive internet searches require good reasons. One of those reasons from mid 2006 was Divine Strake. In mid 2006 the US Government announced that it intended to conduct a large, non-nuclear, high-explosive test known as "Divine Strake" at the US Government's Nevada (nuclear) Test Site. The test would use hundreds of tonnes of conventional explosive to simulate a low nuclear yield bunker buster test of the type that might be useful one day against deep dug Iranian nuclear facilities.

The prospect of a Divine Strake test created considerable interest in the Iranian nuclear community in 2006-2007. The point of interest for Iran was probably that Iran might be the likely target of US weapons. Iran might also benefit from conducting zero yield nuclear tests along with supercomputer simulations (noting the evident interest below). These simulations might be one of a number of productive avenues for Iran's own nuclear test program as they might partly avoid the need for Iran to conduct actual nuclear tests, down the line, if it wanted to.

The Iranian nuclear community therefore began to conduct some pointed internet searches to discover what the American's were doing. Using my website and a simple, free site-meter, Submarine Matters began to detect and collect some searches by employees of Iranian Atomic research institutions. Although the US Defense Threat Reduction Agency (DTRA) officially canceled Divine Strake in February 2007 some interesting Iranian Google search results were gathered as detailed below. If readers are accustomed to using simple site-meters or even professional metadata collection they will have a handle on the significance of the following.

In 2006 Google revealed to commercial site-meters the words used by readers in keyword seachers. By 2016 Google began to disguise the precise keywords.

Information collected above on Iranian interest in "nuclear weapon effects computer" prompted me to do further research on supercomputer upgrades at the Isfahan University of Technology. In 2011 the then President Mahmoud Ahmadinejad reportedly unveiled a supercomputer at Isfahan University of Technology - see https://en.wikipedia.org/wiki/Isfahan_University_of_Technology#Research_and_facilities .

Since 2014 Iran has been at or near nuclear weapon breakout status - with the three components being:

- substantial stocks of semi-enriched uranium (LEU or MEU), which could become bomb grade (90+%) HEU within a couple of months using Iran's thousands of centrifuges and possible hidden laser enrichment capability.

- delivery means - in the form of Sejjil http://en.wikipedia.org/wiki/Sejjil solid fuel IRBM and the  Shahab series liquid fueled IRBMs, and

- enough nuclear device plans and components acquired from Pakistan's A. Q. Khan network to have constructed crude fission devices (minus the HEU and/or Plutonium explosive) around 2006.

Iran has been building a nuclear weapon program because regional opponent, Israel, has developed nuclear weapons since the mid 1960s.

Shiite Iran's Sunni opponent Saudi Arabia has had the potential political and financial muscle to buy nuclear weapons and missiles from Pakistan and China since the 1980s. The Saudis bought Chinese inaccurate-hence-nuclear-specific-use CSS-2 IRBMs in 1987.  The Saudi's also reportedly bought from China more advanced nuclear-use DF-21 (CSS-5) MRBMs in 2007. See the Newsweek article and http://www.nti.org/gsn/article/us-backed-secret-saudi-missile-purchase-china/. 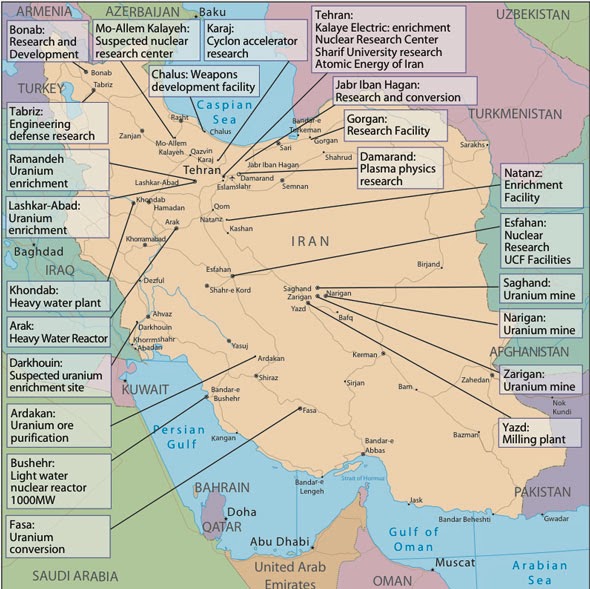 Pete
Peter Coates, Director, Submarine Matters International (SMI). This website provides comments and intel on technical, political and geo-strategic aspects of submarines and non-sub weapons systems. Have been associated with intel and the military (all arms) for 40 years. Published more than 1,800 articles since 2007. Master of Arts (Strategic Studies) High Distinction average. If you've arrived at an old blog article, to get to the latest article, just click on the largest (Blue) "Submarine Matters" title up top. Best way to navigate this site is to put a keyword in the search box, top left corner.